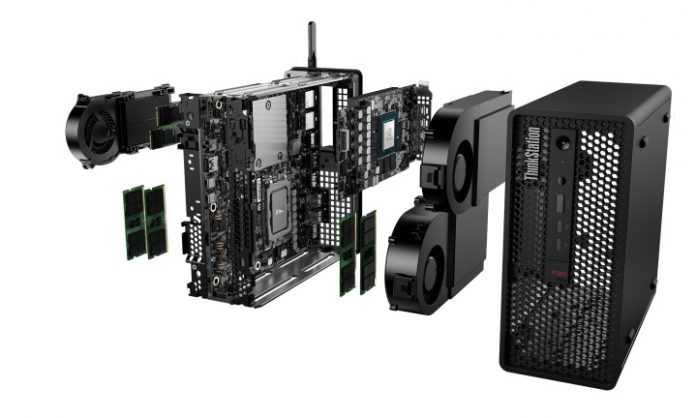 Usually, the faster the PC, the more hot it gets and the bigger it is. But what if you could just have the components worthy of the best desktops in a case that’s smaller than an Xbox Series X? That’s exactly what Lenovo is doing with its ThinkStation P360 Ultra, which clocks in at just under 4 liters of volume.

That’s almost 3 less liters than the Xbox Series X, and much, much smaller than the typical desktop, while also supporting up to a Core i9-12900K and an RTX A5000. With these specs, the P360 Ultra might be the fastest small form factor PC ever launched.

In order to cram all this hardware into such a tiny chassis, Lenovo worked with Intel and Nvidia to design the P360 Ultra from the ground up. Just like all other small form factor PCs, however, it wasn’t feasible to use the highest-end and highest power-consuming parts. The highest-end configuration does have a Core i9-12900K and an RTX A5000, but the 12900K is limited to 125 watts (down from the usual 241W) and the A5000 is actually the mobile version, which has significantly less cores and half the memory of the desktop RTX A5000 24GB.

But it’s important to keep in mind that this workstation is tiny and weighs just 4 pounds: You can literally pick it up with one hand. The hardware it has is also still very, very fast, even though it’s limited by power and thermal constraints, so the P360 Ultra should have no problem going head-to-head with everything except the fastest of high-end workstations (like Lenovo’s own ThinkStation P620).

The P360 Ultra is also quite robust in other categories: It supports up to 128GB of DDR5 4000MHz RAM (ECC and non-ECC options included), 8TB of NVMe storage, two Thunderbolt 4 ports, and 2.5 Gigabit Ethernet. One important thing to point out here, however, is that the NVMe SSDs only run at PCIe 3.0, which is half the speed of PCIe 4.0. Though 12th-generation CPUs do support PCIe 4.0 SSDs, this seems to be a limitation of the motherboard. The GPU on the other hand runs at PCIe 4.0, so no worries there.

The ThinkStation P360 Ultra will be available later this month and starts at $1,299 for a model that has a 12th-Gen Core i3. That’s obviously not a cheap price, but a small form factor always costs extra.

Find A Good Gaming Account Deal And Save Yourself The Trouble

Fender and MINI get their own branded Horizon World levels

What to Expect From Apple Through July: iOS 16 Public Beta, New MacBook Air, Back to School Promotion, and More