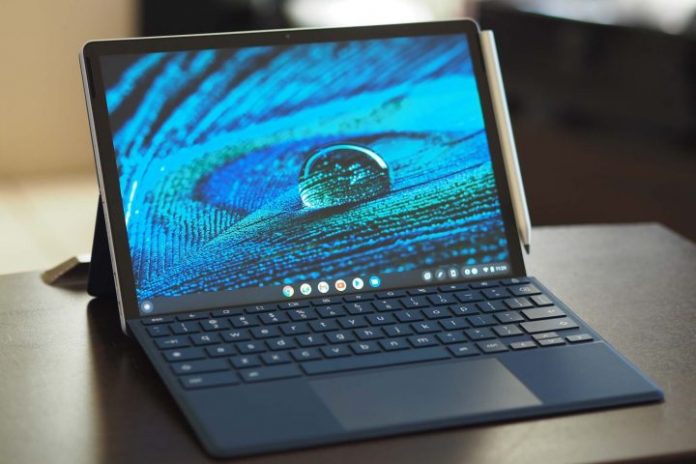 Several small Chrome OS tablets are on the market that compete directly with Apple’s iPad. Two of the best are HP’s Chromebook x2 11 and Lenovo’s Chromebook Duet 3. The previous version of the Chromebook Duet, in fact, is on our list of best budget laptops, soon to be replaced by the newer model.

These are very similar Chromebooks in design, with the most significant differentiator being price. The Chromebook Duet 3 comes in at a budget-friendly $300, while the Chromebook x2 11 retails for $600 or more. Is HP’s model worth the extra cash?

The Chromebook Duet 5 is constructed with aluminum along the edges and plastic on the back cover. That’s contrasted with the Chromebook x2 11, which is manufactured from a single block of aluminum. However, both tablets feel solid without bending, flexing, or twisting. They’re each as robust as tablets costing a lot more money.

Aesthetically, the Chromebook x2 11 is an all-silver slate that’s minimalistic and attractive. The Chromebook Duet 3 comes in two colors, Misty Blue and Storm Gray, and in both cases has a two-tone design that’s darker along the bottom tw0-thirds and lighter along the top. It, too, is a simple slate design with little to make it stand out.

Both tablets have two-part folio attachments. One part is held in place via strong magnets along the back and includes a kickstand that opens at the center and provides angles from almost straight up to nearly lying flat. The other is the detachable keyboard that connects via pogo pins along the tablet bottom and is also held in place by magnets. In both cases, the combination is a little cumbersome to connect and disconnect when switching from “laptop” to tablet mode. The Chromebook Duet 3’s version is cloth-covered, so it looks better and is more comfortable to hold.

Both detachable keyboards were too small, with cramped key spacing, small keycaps, and switches that were loose and not very precise. The Chromebook x2 11 keyboard’s only advantage is that it props up at an angle, while the Chromebook Duet 3’s version did not. That made the HP slightly more comfortable for typing, but not by a lot. Both touchpads were small but worked well, with solid and quiet clicks and smooth surfaces to support all Chrome OS multitouch gestures.

Connectivity was almost identical, with two USB-C ports and no 3.5mm audio jack — you’ll be relying on Bluetooth for headphones or external speakers. The Chromebook x2 11 does have a microSD card reader, which is a plus, along with a SIM slot for the optional 4G LTE. In addition, both tablets are limited by the Qualcomm chipset to Wi-Fi 5 and Bluetooth 5.1.

Finally, the front-facing webcam on both tablets is 5MP, providing plenty of quality for videoconferencing. And both tablets sported an 8MB world-facing camera on the back.

Both tablets are built around Qualcomm’s Snapdragon 7c system-on-chip (SoC). The Lenovo Chromebook Duet 3 uses the second generation of the SoC, but it only made a slight difference in our benchmarks.

At least as far as CPU performance goes, these two tablets are evenly matched. My Chromebook x2 11 review unit came with 8GB of RAM, providing more multitasking overhead than the Chromebook Duet 3’s 4GB. The Lenovo lists up to 8GB in its specifications, although I couldn’t find that configuration available yet for purchase. With the same number of Chrome tabs and Android apps open, both tablets performed the same.

Neither tablet was great for Android gaming, with some stuttering and hesitation in Asphalt 9. They’re both best for casual gaming.

Outside of the difference in aspect ratios, the displays on the Chromebook Duet 3 and the Chromebook x2 11 were excellent. They were bright with dynamic colors that weren’t oversaturated, and they both enjoyed true blacks without the tinge of gray that indicates a poor contrast ratio. Holding the two side by side, you’d be hard-pressed to tell a difference in quality.

Both panels support an active pen, which is optional on both tablets. I was able to test the pen on the Chromebook x2 11, and it worked fine in support of the Chrome OS suite of inking functions. The pen wasn’t included with my Chromebook Duet 3 review unit, so I couldn’t test the Lenovo active pen.

The folios add some thickness and weight, with the Chromebook Duet 3 coming in at 0.31 inches and 1.14 pounds for the tablet alone and the Chromebook x2 11 tablet at 0.3 inches and 1.23 pounds. Neither company published the folio’s thickness, but the Lenovo is 2.09 pounds total with the folio attached, and the HP is 2.27 pounds. The Chromebook Duet 3’s display comes in an unusual 15:9 aspect ratio compared to the Chromebook x2 11’s more typical 3:2, making it slightly wider and shallower. The display bezels were similarly sized on both tablets, neither being particularly small. Overall, both tablets were highly portable and barely noticeable in a backpack.

In our battery tests, the tablets were split. The Chromebook x2 11 lasted a little more than an hour longer in our web browsing test that cycles through some popular and complex websites, but the Chromebook Duet 3 lasted five hours longer on our video test that loops a local Full HD Avengers trailer.

Both laptops will get you through a full day’s work, but the Lenovo will keep you bingeing Netflix for a little longer.

The Lenovo Chromebook Duet 3 is the clear value leader

There’s currently one $300 model of the Lenovo Chromebook Duet 3 available, with the Qualcomm Snapdragon 7c Gen 2 CPU, 4GB of RAM, and 64GB of eMMC storage.

If you can score the HP Chromebook x2 11 for its on-sale price of $450, then the extra RAM and storage might be worth the upcharge. However, there’s no better laptop available at $300 than the Chromebook Duet 3. Given the similarities between these two Chrome OS tablets, we have to give the Lenovo the nod for its extreme value.