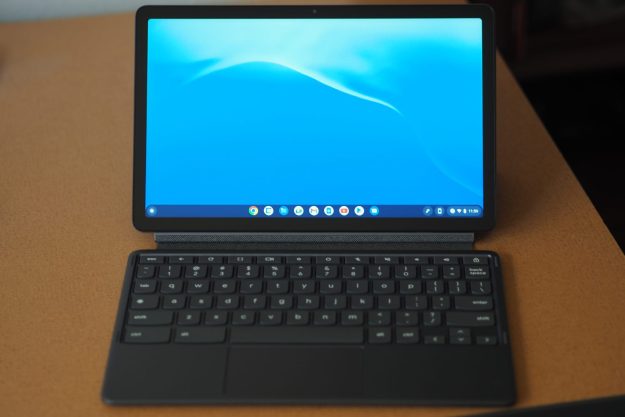 “The Lenovo Chromebook Duet 3 is fast enough for the tasks it will be expected to perform, with excellent battery life and a lovely display.”

Expensive, top-of-the-line laptops are fun to review in their own right. But it’s budget laptops where the rubber hits the road — and where most people are shopping.

Chromebooks are a good place to look in this regard, and the Lenovo Chromebook Duet 3 has always been one of our favorite devices to recommend on that list. $300 for a compact, powerful, and surprisingly well-built 2-in-1.

My review unit came with a Qualcomm Snapdragon 7c Gen 2 CPU and a 10.9-inch 2K (2,000 x 1,200) display, and it’s the only configuration sold here in the states. Despite the uncomfortably small keyboard, Lenovo continues to impress by how much they’re able to squeeze into a device this cheap.

The Chromebook Duet 3 has been updated from the previous generation, with the most significant change being an increase in screen size from 10.1 inches to 10.9 inches. That results in the new version being slightly larger, about half an inch wider and a quarter of an inch taller. The bezels remain the same size, which is excessive for a modern device.

The Chromebook Duet 3 has increased slightly in thickness to 0.31 inches from 0.29 inches, and it weighs 1.14 pounds, up from 0.9 pounds. The most direct competitor, HP’s Chromebook x2 11, is slightly narrower but half an inch taller, at 0.3 inches thick and 1.23 pounds. The base Apple iPad with a 10.2-inch display is narrower and taller but thinner at 0.29 inches and lighter at 1.07 pounds, and the Microsoft Surface Go 3 with a 10.5-inch display is also narrower and taller while being thicker at 0.33 inches and heavier at 1.2 pounds.

The tablet is constructed of a mix of aluminum along the edges and plastic on the back cover. I found it to be as well-built as other comparably priced tablets, with no bending or flexing. This doesn’t feel like a $300 tablet, which is saying a lot.

The kickstand here works as well as the built-in version on Surface devices.

Aesthetically, the Chromebook Duet 3 is a straightforward slate design with two color choices. My review unit was the Storm Grey, which was dark grey along the bottom three-quarters of the edges and the back cover and a lighter grey along the top. There’s also a Misty Blue option. Today’s tablets are very similar, with none of Lenovo’s competition standing out in terms of look and feel.

The included cloth-covered folio rear kickstand cover and detachable keyboard is a two-part unit, which is less convenient than one-piece designs. However, the back cover attaches solidly via magnets and doesn’t feel like it’s likely to come off accidentally, and the kickstand works as well as the built-in version on the Microsoft Surface Go 3 with a wide range of angles. Combined, the folio adds 0.95 pounds to the tablet’s total weight, bringing it up to 2.09 pounds.

You get two USB-C 3.2 Gen 1 ports and a pogo pin connector for the keyboard, and that’s it. There’s no audio jack, which is disappointing, nor an SD card reader, which isn’t surprising.

Wireless connectivity is provided by Wi-Fi 5 and Bluetooth 5.1, a limitation of the Qualcomm chipset.

Another change from the previous generation is a switch from a MediaTek Helio P60T CPU to a Qualcomm Snapdragon 7c Gen 2, an 8-core ARM CPU running at up to 2.4GHz. That provides a small bump in speed with a more up-to-date ARM processor. There’s 4GB of RAM and 64GB of eMMC storage, both of which are enough for a smooth Chrome OS experience thanks to the operating system’s inherent efficiencies.

During my testing, I found the Chromebook Duet 3 to be quick enough for the kinds of tasks for which a Chromebook is typically used. I could open quite a few Chrome tabs and run some Android apps in the background before I noticed any slowdown. Certainly, I could tell that the Chromebook Duet 3 was slower than laptops equipped with Intel Core CPUs, but for the money, the 2-in-1 was more than adequate.

Objectively, the Snapdragon 7c Gen 2 wasn’t fast at running the Geekbench 5 benchmark, equaling the same CPU in the HP Chromebook x2 11 but falling behind the Intel Chromebooks and the Acer Chromebook Spin 513 with a newer MediaTek Kompanio 1380 CPU. It hit 45 in the Speedometer 2.0 benchmark, again the same as the HP and slower than the rest of our comparison group.

You’ll be challenged in running the most intense Android games. For example, Asphalt 9 suffered some stuttering during gameplay. You’ll likely want to limit yourself to more casual titles.

The 11-inch IPS display comes in at a resolution of 2,000 x 1,200, labeled as 2K, and with a very unusual 15:9 aspect ratio. That’s a little taller than 16:9, but just barely so. The display is sharp enough that you can’t see any pixels unless you look for them, and I found it to be bright and colorful during my testing. Lenovo promises 400 nits of brightness, and I believe the display comes close.

I can’t apply my colorimeter to the display because it’s not supported in Chrome OS. Subjectively, though, in addition to being bright and colorful, the contrast is fairly deep with true blacks and text that pops on a white background.

The closest competitor is the HP Chromebook x2 11, which has a more traditional 3:2 display at 2,160 x 1,440. That makes the HP’s display sharper and even taller, but I would characterize the overall quality as similar.

Two side-firing speakers provided audio that was clean and bright but didn’t get very loud. Mids and highs were nicely done, but there was zero bass. The sound quality is sufficient for system sounds and watching YouTube videos by yourself, but pull out a pair of Bluetooth headphones for bingeing Netflix and listening to your tunes.

The keyboard is a different story. While it’s well-built and water-resistant, it’s also quite cramped, with small keycaps and significantly less key spacing than the typical laptop keyboard. The switches aren’t very smooth, with sufficient travel but a loose feeling and a bottoming action that lacks confidence.

It took me quite some time to get used to the keyboard, and I never did feel comfortable typing on it. The HP Chromebook x2 11’s keyboard was just as disappointing, while the Microsoft Surface Go 3’s version was much better. The best thing about the Chromebook Duet 3’s folio attachment is that it’s included in the $300 price.

The touchpad is small but comfortable to use, with a smooth surface and reliable support of the full range of Chrome OS multitouch gestures. The buttons provide a solid and quiet click. The display is touch-enabled, of course, and supports Lenovo’s USI active pen. I didn’t receive the pen with my review unit and couldn’t test inking.

The front-facing camera is a full 5MP, meaning it can provide a higher-resolution video image than many laptops costing hundreds (or thousands) more. It’s a great option for hybrid workers who want a highly portable device for videoconferencing.

Battery life is a real strength of the Chromebook Duet 3, and it beats out all its similarly priced competition. This budget laptop will run for a full day of work and into the evening.

The Lenovo Chromebook Duet 3 is a fantastic value at $300, particularly given that the folio kickstand and detachable keyboard are included. And it’s not just about the price — this little Chrome OS tablet can handle a surprising range of tasks, falling short of only the most demanding productivity and creative workflows.

You’ll spend hundreds of dollars more for a similar setup that won’t gain you much additional functionality. The Lenovo Chromebook Duet 3 is the best budget Chrome OS tablet (a little) money can buy.

The closest Chrome OS tablet is the HP Chromebook x2 11. It’s about twice as expensive and offers similar performance but less battery life. It, too, includes its kickstand and keyboard add-ons, and its display is slightly sharper.

If you’re looking for a Windows 11 tablet, then the Microsoft Surface Go 3 is an option. It will also cost you more money, especially when you add on the detachable keyboard, but you’ll get a built-in kickstand and a much better typing experience.

Finally, the Apple iPad is a solid alternative. It starts at about the same price but doesn’t include the keyboard. However, you’ll get better performance and more apps, making the iPad a strong competitor.

The Chromebook Duet 3 is built well enough to last for years of service, and its components will keep the streamlined Chrome OS running efficiently for just as long. And the one-year warranty is more than acceptable at this price.

Yes. At $300, the Chromebook Duet 3 makes a great secondary computer for demanding users and a great starter tablet for everyone else.