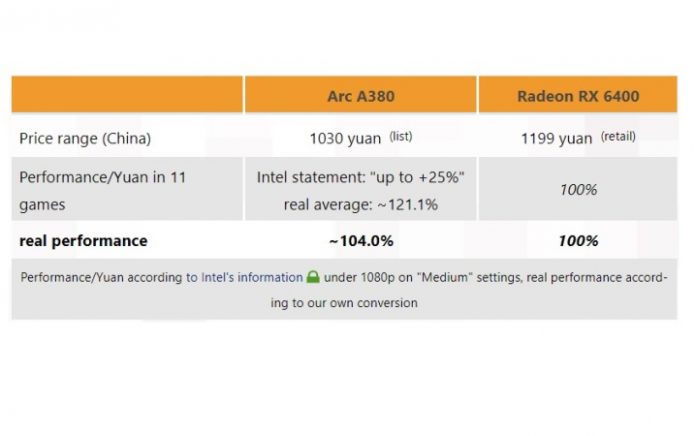 Today marks yet another round of bad news for Intel Arc Alchemist, this time pertaining to the Arc A380, which is the first discrete GPU for desktops that Intel had released. Upon announcing the card, Intel compared it to the budget AMD Radeon RX 6400, all the while promising that the A380 would provide an up to 25% uplift in performance versus the RX 6400.

Intel’s claims have been closely examined, and unfortunately, the A380 fails to meet those expectations. While the Intel Arc GPU is faster than the AMD RX 6400, it only wins by 4%. The other cards from the lineup have also been given another look.

Intel has just recently released its first Arc Alchemist desktop GPU, the A380. For the time being, the card is only available in China, and is only being shipped in pre-built desktop PCs. However, Intel has promised to soon move on to the next stage, which is to release it on the DIY market in China, and then finally, globally.

As part of the release announcement, Intel shared a performance slide for the GPU, showing the average frames per second (fps) when gaming at 1080p on medium settings. With that, Intel promised that the A380 should be up to 25% faster than the AMD Radeon RX 6400 — but the slide didn’t contain any matching figures to back up that statement. This prompted 3DCenter to verify that information, and unfortunately, it’s bad news all around for Intel Arc.

It seems that the general public may have missed an important factor in relation to Intel’s claims — the promise of an up to 25% increase in performance only applies to a performance versus price comparison. In short, since the RX 6400 is slightly more expensive than the A380, the actual performance boost is much smaller than expected.

3DCenter compared the data available for Intel Arc A380 and for the RX 6400. The Intel GPU is priced at 1,030 yuan (around $153) while the AMD graphics card costs 1,199 yuan ($178). According to 3DCenter, Intel’s claims mostly check out when it comes to performance per yuan — the Arc A380 wins by around 21%, making it more cost-effective. However, the raw performance gains are significantly smaller, amounting to around 4%.

As a result of those findings, 3DCenter went on to take a closer look at some of the other claims that were made about the performance of the entire Intel Arc lineup. Although much like Intel’s claims, these comparisons are difficult to verify, it seems that it might be a good idea to keep your expectations muted where Intel Arc desktop GPUs are concerned.

The flagship Intel Arc A780, with the full 32 Xe-cores across a 256-bit bus and 16GB of GDDR6 memory, was often compared to the Nvidia GeForce RTX 3070, and sometimes, even the RTX 3070 Ti. However, 3DCenter now says that the GPU will be “slightly worse than RTX 3060 Ti.” The other GPUs in the range are also knocked down a notch with these updated predictions, with the most entry-level A310 now being called “significantly slower than Radeon RX 6400.”

It’s hard to deny that things are looking a little bleak for Intel’s first discrete gaming GPU launch. After numerous delays, a staggered launch, and most importantly, with questionable levels of performance, it might be difficult for Intel Arc to find its footing in a GPU market dominated by Nvidia and AMD. However, despite the wait, it’s still early days, and further driver optimizations might bring Intel Arc amongst the best GPUs yet — especially if the company keeps the price competitive.

The U.S. government’s USB-C demands are too little, too late

WhatsApp now lets you control who can see your profile