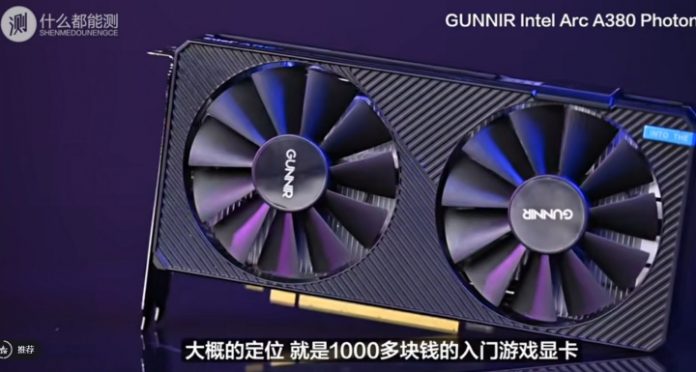 Intel Arc Alchemist A380 is Intel’s first desktop graphics card in the lineup, and as of today, the first reviews of the GPU started rolling in as the embargo had been lifted. Unfortunately, the first look at Intel Arc doesn’t bode well for the card.

According to early reviews, Intel’s A380 struggles to compete even against the most low-end GPUs made by AMD and Nvidia.

After a series of early leaks, Intel Arc A380 appeared in a video posted by Shenmedounengce on Bilibili. The model in question is actually a custom version of the card, the Gunnir A380 Photon. It differs from the basic version of Intel Arc a little bit — it comes with two fans and a slightly higher clock speed of 2450MHz.

The A380 features the full ACM-G11 GPU and comes with 8 Xe-Cores as well as 6GB of GDDR6 memory and a 96-bit memory bus. Although the GPU uses 16Gbps Samsung modules, this model’s memory is configured for 15.5Gbps, which is less than the version offered by Intel. So far, this is the only custom design of the GPU that we’ve seen.

For the purpose of testing, the reviewer paired the Arc A380 with an Intel Alder Lake Core i5-12400 processor, B660 motherboard, and DD4 RAM. The GPU was tested in synthetic benchmarks on 3DMark TimeSpy and Port Royal, but it was also put to the test in real-world gaming environments. In both cases, it was compared to entry-level offerings from Nvidia and AMD, including the GeForce GTX 1650, the RTX 3050, and the Radeon RX 6400 as well as 6500 XT. These are indeed the GPUs Intel can hope to compete against with the A380, but unfortunately, the card seems to fall short.

The synthetic benchmarks went well enough for the A380. It proved itself to be faster than the RX 6400/6500 XT and the GTX 1650. However, Nvidia’s RTX 3050 has it beat in both Port Royal and Time Spy, and in the former, the difference is massive — the RTX 3500 is 3.7 times faster than the A380. The difference between the two cards is much smaller in the TimeSpy test.

It’s all downhill from there when we move on to actual gaming tests. Shenmedounengce tested the GPU in League of Legends, PUBG, Tomb Raider, Forza Horizon 5, GTA 5, and Red Dead Redemption II. In every single one of these games, the Intel Arc A380 was outperformed by both AMD and Nvidia when playing at 1080p. On the upside, the A380 came very close in some games.

Intel Arc Alchemist has been having a pretty rough time. Just recently, Intel’s claims about the performance of the GPU had been closely examined, and it seems that we might need to lower our expectations in regards to the kind of gaming prowess we can expect from Intel Arc. The staggered release of the GPU, which is right now only available in China in pre-built PCs, is also not helping it shine.

Of course, there might be hope yet for Intel Arc. Perhaps further driver optimizations will result in an increase in performance, and as time goes on and the flagship A770 is released, Intel might become competitive. As it stands now, Intel is likely to have a hard time winning over many users, considering that both AMD and Nvidia entry-level options are now readily available, and their prices are nearing MSRP.