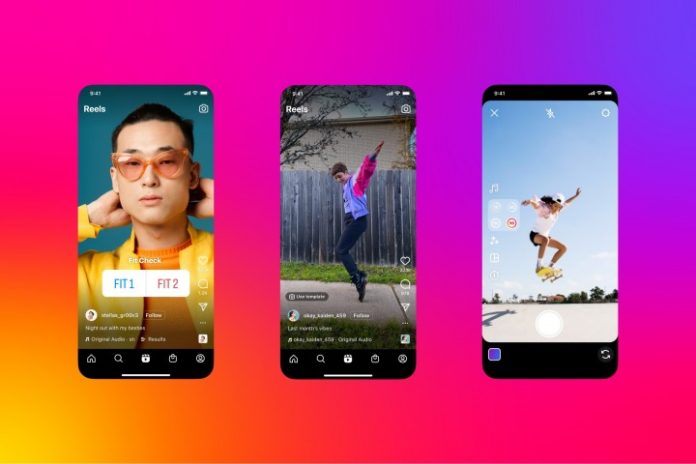 Meta has introduced new tools for the Reels video feature on Instagram and Facebook that are a one-two punch against TikTok. The company announced the new features on Thursday, saying they would make it easier for content creators who prefer one or both of the platforms to their behemoth long-form video competitor to better connect with their audience.

On Instagram, Meta has extended Reels to 90 seconds, giving users more time to express themselves and promote their brands and products. In addition to the extended run time, Reels is also getting stickers that were once exclusive to Instagram Stories. Aside from the captions that are present at the beginning of a video, users will be able to use polls, stickers, and emoji slider stickers when showing their viewers new things or comparing what hairstyle, outfit, or product design they might like best.

To up the ante on TikTok, Instagram is implementing the Template feature, allowing creators to recreate a reel based on an existing template. With a push of the “Use Template” button, they’ll be able to pull the audio and clip sequence from the original reel and edit it with their own content. For more originality, they can use their own audio with the Import Audio feature, which is useful when they want to give commentary on current events and add background music that they can pull from any video on their camera roll that’s at least five seconds long.

Meanwhile, Facebook users will now take their Facebook Reels creation out of the confines of their Android and iOS devices to their desktop, which makes it easier to schedule their Reels posts. Meta is also rolling out video clipping tools on Creator Studio for creators to cut and edit their otherwise longer videos down to 60-second Reels. Audio-wise, it is now allowing Facebook Reels users to narrate their videos, implementing text-to-speech audio, and has launched Sound Sync, which lets users sync video clips to the beat of their favorite songs.

The new Reels features come on the heels of Facebook’s Messenger app adding the Call tab for users to make audio and video calls to their friends and family without going into their chats. Just as Messenger is becoming more like WhatsApp, Facebook and Instagram are turning into TikTok, if not overtaking it.