HomeHow toHow to find the Claymore in Elden Ring
How to

How to find the Claymore in Elden Ring 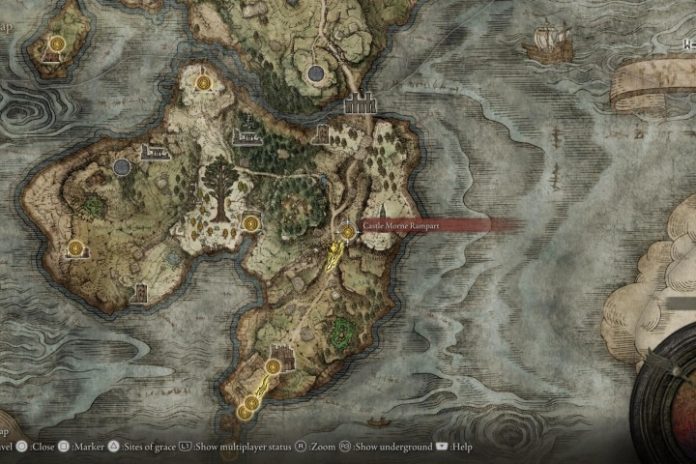 FromSoft did everything right with Elden Ring, which includes carrying fan-favorite weapons over from previous Dark Souls games. So, if you’re wondering if the Claymore is in Elden Ring, you’re in luck! With a little bit of exploration, you’ll find this famous greatsword on the southernmost tip of the Lands Between. Whether you’re an experienced Souls player or a newcomer to the series, you can always rely on the Claymore as an accessible weapon for most builds.

Those playing a more melee-focused role should have the stats to wield it, even early on. In general, mages, sorcerers, and magic-centered builds can still use the Claymore with only minor investments in strength and dexterity. After all, you’ll run out of FP eventually. Here’s where to find the Claymore in Elden Ring, the stats required to wield it, and some helpful tips and tricks for pairing it with other weapons and Ashes of War.

Where to find the Claymore in Elden Ring

To find the Claymore in Elden Ring, you’ll need to head south, deep into the Weeping Peninsula. From Southern Limgrave, cross the Bridge of Sacrifice and follow the road south until you happen upon a woman standing alone off to the side. She’ll tell you of Castle Morne and the uprising that’s since displaced her. The woman’s father stayed behind to defend the castle, and she’ll task you with delivering a letter to him. Side quests like this are a great way to find new weapons and explore new locations in Elden Ring.

While completing this side quest doesn’t reward you with the Claymore, playing through it will grant you a valuable weapon worth pairing with the sword. You will, however, stumble upon the Claymore in Castle Morne, so think of this little quest as a “two birds with one stone” situation. Here’s where to find the Claymore in Elden Ring.

Step 1: Head south from the Castle Morne Rampart site of grace. This site is slightly off the beaten path, so bear left once you see the castle over the horizon. You’ll find a merchant nearby as well. See the image below for an exact location.

Step 2: Continue following the road south. You’ll also find a map fragment for the Weeping Peninsula along this trail. Ride into the castle and activate the Castle Morne Lift site of grace.

Step 3: Ride the lift up and hug the left side of the courtyard. The mob of enemies to the right is too much to deal with, especially for new players looking to find the Claymore in Elden Ring. Instead, hug the left wall of the courtyard and deal with the dogs one by one. Do not go up the short flight of stairs. If you have a bow in your inventory, use that to take them out from a distance.

However, the easiest way to kill dogs in Elden Ring is to equip a shield (preferably one that negates 100% of physical damage) and let them bounce off it. The dogs stagger backward, leaving them open to a flurry of attacks. The Great Turtle Shell, the Jellyfish Shield, and the Brass Shield are all viable options. However, any shield will get the job done.

Step 5: Head up the short staircase and climb the ladder at the end of the path. There’s another bird-beast enemy at the top of the ladder, so be careful. If you still have that shield equipped, just hold it up and let them bounce off it.

From the ladder, walk straight ahead, jump onto the tent, and then jump over the wall. Head through the door and turn left. There, you’ll find a treasure chest containing the Claymore.

Once you’ve found the Claymore, you’ll need to level up the correct stats to wield it. Thankfully, this won’t require too many runes. To use the Claymore in Elden Ring, you’ll need:

The Claymore comes with the Lion’s Claw skill (“weapon art” for you Dark Souls 3 fans) without any enchantments. However, you can equip it with a litany of ashes from any site of grace. You may consider the Endure Ashes of War enchantment if you’re playing a pure strength build. This works exactly like Perseverance in Dark Souls 3, briefly boosting your poise to tank through incoming attacks. Once you’ve equipped your desired ashes, make it a Heavy Claymore to increase your strength scaling.

As mentioned, the Claymore works with all builds (as long as you’ve allocated enough strength and dexterity). Those with high Intelligence can opt for magic or cold enchantments, whereas high faith builds can play with Flame Art enchantments.

Remember that side quest we mentioned earlier? Finding the woman’s father puts you in a position to unlock a fantastic weapon to pair with the Claymore and any other broad-swinging weapon.

Get back up to where you jumped over the wall. Instead of heading straight from the ladder, continue along the wall where that initial bird-beast enemy came from. Deal with a few more flying bird-beasts until you come to another ladder on the left side. Climb down to find some soldiers and bird-beasts fighting with each other. We recommend killing them, as it’ll make the next part a little easier.

Head up the stairs ahead and talk with the knight sitting at the top of the tower. He’s the leader of Castle Morne and the woman’s father whom you’ve been looking for. However, he’ll say he must stay to retake the castle.

Instead of walking away, attack him. You should get a few hits in before he actually gets up and strikes you back. Keep your distance, and let him miss before swinging. Watch out for his yellow blast attack. You’ll notice him glowing before he launches it. The attack has a wide AOE, so roll back a few times to avoid it. Fighting him up on the tower makes it hard to dodge this attack. Instead, lure him down the stairs and fight in the more open area.

After killing him, you’ll get the Banished Knight’s Halberd. This weapon already comes upgraded to +8, and you can equip it with your favorite Ashes of War. We gave ours a poison enchantment, but it’s totally up to you. The best part is the accessible attribute requirement for this halberd. You’ll only need 14 strength and 12 dexterity to use it, attributes you already have if you’re using the Claymore.

With the halberd in your left hand and the Claymore in your right, the duo makes a great poke/slash combo that staggers most enemies.