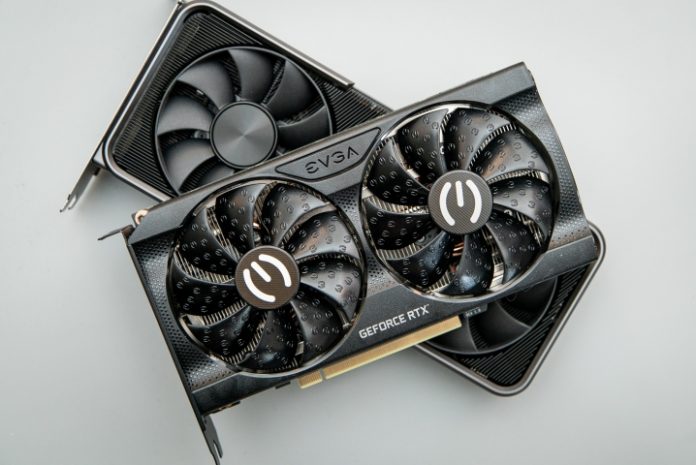 GPU prices are dropping, and they have been for months. A new report from Bloomberg shows just how quickly they’re crashing, claiming that prices have dropped by as much as 50% as the market deals with the crypto fallout.

The report lays out a compelling argument for GPU prices falling alongside the price of Ethereum, which is a trend from the crypto decline we wrote about in June. According to the data, the average price of an RTX 3080 on the secondhand market has dropped by nearly 50% since late April.

It’s a sobering reality check as the GPU shortage comes to a close. Although multiple factors have contributed to the GPU shortage, the demand from cryptocurrency miners seems to be the main driver. In the first half of 2021, for example, a quarter of all GPU sales went to cryptocurrency miners. Some estimates say miners spent $15 billion on GPUs just for mining Ethereum.

The boom from cryptocurrency catapulted the value of Nvidia and AMD last year. Nvidia, in particular, saw 50% growth in revenue in each of the last two years, despite the fact that the company reported that less than 1% of its gaming-related sales came from the company’s mining-focused GPUs. Nvidia added a limiter to its gaming graphics cards to discourage mining, but hackers were able to bypass the limiter completely in May.

If you feel like it’s impossible to tell the impact of crypto on the price of GPUs, you’re not alone. In May, the U.S. Securities and Exchange Commission (SEC) fined Nvidia $5.5 million for not disclosing the influence of cryptocurrency on its revenue over the past several years.

The rapid drop in prices comes on the heels of around $800 billion in crypto value disappearing from the market. Prior to that point, GPU prices were starting to approach MSRP. Now, you can find several of the best graphics cards, brand new, for sale under list price.

It’s an interesting time for graphics cards, not only because they’re becoming cheap, but also because Nvidia and AMD are gearing up to release new generations. Nvidia is working on its RTX 40-series graphics cards and AMD has its RX 7000 GPUs, and we expect to see both before the end of the year.

We could see prices go back up if demand from cryptocurrency miners does. On the other hand, we may see a repeat of the crypto fallout in early 2018. Similar to 2020, crypto boomed in late 2017 and caused a GPU shortage. Once prices returned to normal, Nvidia and AMD were stuck in a tough spot with pallets of GPUs that there was little demand for.

It’s possible that we’ll see a repeat of that later this year, hopefully giving gamers a break from hunting for an overpriced graphics card. Regardless, make sure to keep our roundup of the best GPU deals bookmarked to see where the market is going.