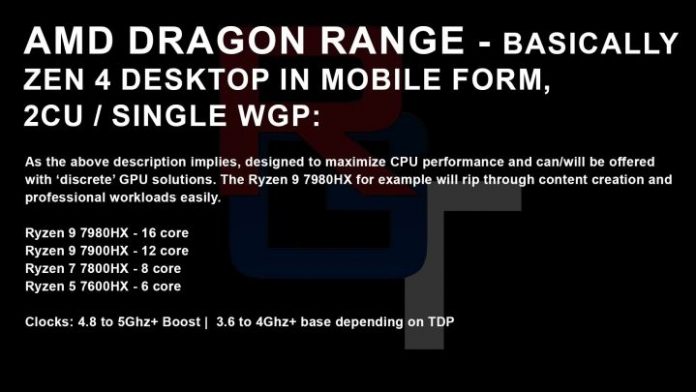 A new leak gives us more insight into the specifications of the upcoming AMD Dragon Range and AMD Phoenix CPUs. Both of these lineups are the next-generation Zen 4 processors made for laptops, although each will have its own niche.

With the specifications of Dragon Range and Phoenix now coming into play, it seems that AMD will be well-positioned to compete against its rivals, Intel and Nvidia, in future gaming laptops.

Red Gaming Tech (RGT) on YouTube talked about the capabilities and specifications of some of the Ryzen 7000 processors for the mobile sector. AMD Dragon Range and Phoenix will each power laptops for gamers, but while Dragon Range will focus on delivering the best possible CPU performance, Phoenix will be competitive thanks to its built-in RDNA 3 iGPU.

Let’s start with Dragon Range. According to Red Gaming Tech, AMD is approaching the lineup much the same way Intel did with Alder Lake-HX. This means that the manufacturer is downsizing its desktop Raphael CPUs to fit inside laptops without needing to compromise on the specifications too much. As a result, the top processor of the four leaked today will have the most cores of any AMD mobile CPU so far.

AMD Dragon Range will be powerful in terms of CPU performance, but it will fall behind when it comes to the integrated graphics card. The idea here is that AMD wants to offer these CPUs in enthusiast gaming laptops, which will typically have one of the best GPUs installed anyway. As such, Dragon Range will only come with two RDNA 2 compute units, which won’t be enough to power any serious gaming. However, it doesn’t really need to — CPUs of this caliber are going to be paired with a discrete graphics card.

Moving on to AMD Phoenix (also known as Phoenix Point), the CPU clearly takes a much different approach. While it’s still a Zen 4 processor, the focus here has shifted to providing a good gaming experience even with thin and light laptops. Seeing as it was made to power lightweight notebooks, Phoenix will run on 35 to 45 watts, keeping power requirements low and battery life higher. This oftentimes translates to poor gaming performance — but AMD has an ace up its sleeve in the form of RDNA 3 graphics.

Compared to Dragon Range, Phoenix is said to serve up to six times more GPU cores, which means up to 12 compute units. As noted by RGT, this means up to 1536 shaders and an iGPU clock frequency of up to 3GHz. AMD may be hoping to rival the Nvidia GeForce RTX 3060 mobile with the top variant of Phoenix.

In this lineup, RGT also expects four different processors, the AMD Ryzen 9 7980HS, the Ryzen 9 7900HS, the Ryzen 7 7800HS, and, lastly, the Ryzen 5 7600HS. These processors would provide better graphics at the cost of significantly lowered core counts, ranging from eight to six cores.

If the rumors prove to be true, next-gen gaming laptops based on AMD CPUs and APUs will have a lot to offer. However, before they ever hit the market, we have the Ryzen 7000 for desktops and the Intel Raptor Lake launch to look forward to later this year.