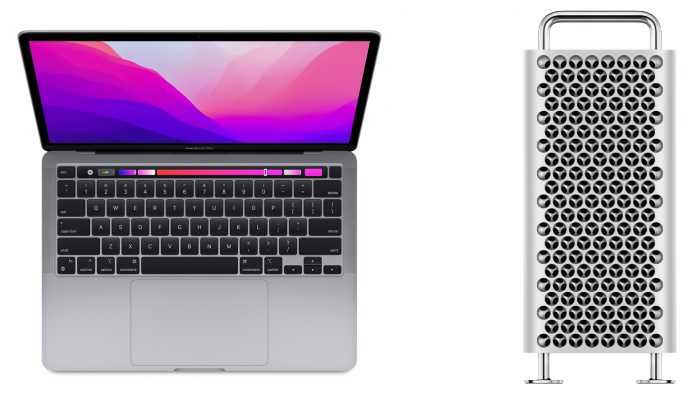 The new 13-inch MacBook Pro with the M2 chip appears to be faster than a base model Mac Pro in benchmarks, despite costing nearly $5,000 less.

In an apparent Geekbench 5 result that surfaced on Wednesday, the new 13-inch MacBook Pro achieved a multi-core score of 8,928, while the standard Mac Pro configuration with an 8‑core Intel Xeon W processor has an average multi-core score of 8,027 on Geekbench 5. These scores suggest the new 13-inch MacBook Pro, which starts at $1,299, has up to 11% faster multi-core performance than the base model Mac Pro for $5,999.

Higher-end Mac Pro configurations are still able to outperform the M2 chip, such as the 12-core model, but at the cost of $6,999 and up.

Given the Mac Pro has other benefits like expandability, configurable GPU options, larger built-in SSD storage capacity options, and much larger RAM options, this certainly isn’t an apples-to-apples comparison, but the benchmarks are nevertheless a testament to the impressive performance of Apple silicon chips in more affordable Macs.

A sample of average Geekbench 5 multi-core scores for various Macs:

The Mac Pro and the high-end Mac mini are the only Intel-based Macs remaining in Apple’s lineup. During its March event, Apple teased that a new Mac Pro powered by Apple silicon is coming, with an announcement widely expected by the end of this year.