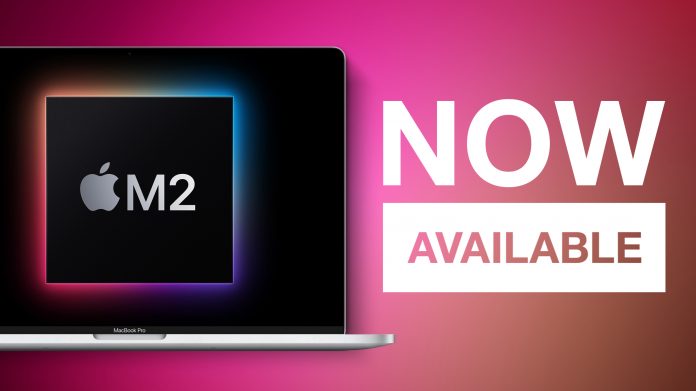 The new 13-inch MacBook Pro with the M2 chip is now available to order worldwide via Apple.com and the Apple Store app. The first deliveries to customers and in-store availability will begin Friday, June 24, according to Apple.

Apple is currently accepting orders for standard 13-inch MacBook Pro configurations, with most upgraded built-to-order configurations listed as unavailable right now, with the exception of a 24GB memory/1TB storage configuration using this link.

The new 13-inch MacBook Pro features the same design as the previous model, including the Touch Bar and two Thunderbolt 3 ports. The only notable change is the M2 chip with an 8-core CPU and a 10-core GPU. Apple said the M2 chip has up to an 18% faster CPU, 35% faster GPU, and 40% faster Neural Engine compared to the M1 chip.

With the M2 chip, the 13-inch MacBook Pro supports up to 24GB of unified memory, whereas the M1 chip maxes out at 16GB of memory. The notebook also supports up to a 2TB SSD. Pricing starts at $1,299 in the United States, with silver and space gray color options available.

Apple is also releasing a redesigned MacBook Air with the M2 chip, but it is not available to order until next month. One notable difference between the notebooks is that the MacBook Air features a fanless design, while the MacBook Pro has an active cooling system to ensure sustained performance for users with more demanding workflows.Related Roundup: 13″ MacBook ProBuyer’s Guide: 13″ MacBook Pro (Buy Now)Related Forum: MacBook Pro
This article, “13-Inch MacBook Pro With M2 Chip Now Available to Order” first appeared on MacRumors.com

Chromebooks might get another great feature from Windows laptops

Do the Pixel Buds Pro have active noise cancellation?