HomeNewsYou can fix your own iPhone screen, but you may not want...
News 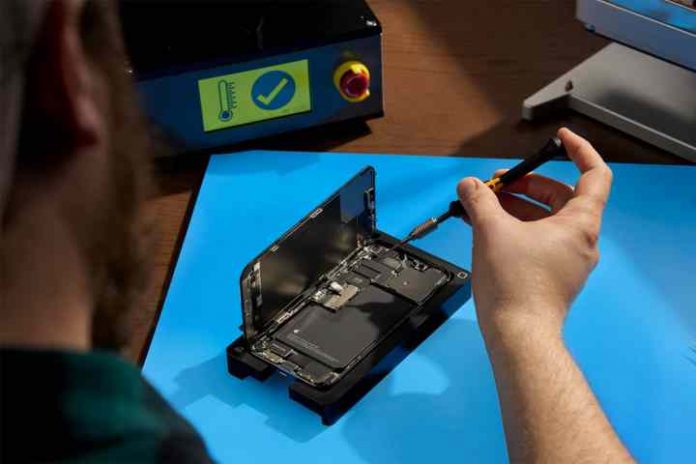 Apple surprised us last year when it announced a new self-service repair program to allow iPhone owners to replace their own broken screens, aging batteries, and other key components.

That program finally launched last month, although, at this point, it’s limited to the iPhone 12 and iPhone 13 families. Nevertheless, if you’re thinking that this may finally let you fix your own screen, you might want to take a closer look at the various other service options available. Apple’s new Self Service Repair program isn’t for the faint of either heart or wallet.

How much does Apple charge to replace a screen?

Unless you have AppleCare+ (more on that later), you’ll need to shell out between $229 and $329 to have your iPhone 12 or iPhone 13 screen professionally replaced at an Apple Store. The exact amount depends on whether you own an iPhone 12 Mini or an iPhone 13 Pro Max.

The cost is more reasonable for older iPhone models, especially those without OLED screens. For instance, while an iPhone 11 Pro screen replacement will set you back the same $279 as the iPhone 12 Pro and iPhone 13 Pro, you can get the LCD-equipped iPhone 11 screen replaced for only $199. Set the Wayback Machine to an iPhone 5S or an iPhone 6, and it drops to $129.

Note that this assumes your screen is the only thing that’s damaged on your iPhone. You’ll pay more if there’s anything else wrong. Apple calls these “out-of-warranty prices,” but except in very rare cases, a damaged screen is never covered by a manufacturer’s warranty, so if you’re walking into an Apple Store, expect to pay. Apple Authorized Service Providers (AASPs) usually follow Apple’s repair pricing, but they aren’t bound by it, so they’re free to charge different rates.

At these prices, you might think Apple’s self-service repair program is a breath of fresh air. After all, shouldn’t it be cheaper to repair your iPhone screen on your own? You’d think so, but in a perhaps misguided desire to ensure that you have everything you need to do the job properly, Apple is making the process nearly as expensive and considerably more cumbersome than visiting your local Apple Store or AASP.

For one thing, genuine Apple parts don’t come cheap. An iPhone 12 Pro display bundle, which gives you a replacement screen and all of the pieces that go with it, costs $270 upfront. That’s only $10 less than having Apple repair it for you, although you will get a $33.60 credit after returning your old display to Apple. This still brings the out-of-pocket cost to $236.35.

A total savings of $42.65 isn’t too bad if you’re already a keen do-it-yourselfer. Still, even then, you’ll probably want to avail yourself of Apple’s repair toolkit, which the company is happy to rent to you for an extra $49 per week — plus a deposit held on your credit card for the replacement cost of the tools.

This kit comes in two separate cases, collectively weighing 79 pounds and measuring 20 inches wide by 47 inches high when stacked. They’re also specific to each iPhone model, so you won’t be able to use the same kit to repair additional phones for friends or family members unless they all happen to be using the same iPhone.

It’s almost as if Apple doesn’t really want you to repair your own iPhone, but what could possibly be its motivation for that? It’s not like it hasn’t spent years lobbying against people’s right to repair their own devices. Apple’s stated rationale for this has always been that it doesn’t want its customers to hurt themselves by trying to fix their own iPhones without the proper tools and “Genuine Apple Parts.” Apple’s new Self Service Repair Program provides both, but in doing so, it also looks like the company wants to tacitly make a case for why its repair services are so expensive.

Screen replacement costs from most AASPs are in the same ballpark as what Apple charges. Large national AASPs like Best Buy charge identical prices, while smaller local and regional AASPs may sometimes charge $10 to $20 less depending on the model and other factors.

However, AASPs generally have stringent requirements they must follow to be approved by Apple. This not only includes regular training and certifications for repair technicians ,but even things like laying out their business in a way that’s “consistent with the Apple brand.” All this drives up their costs.

In 2019, Apple introduced a new program for Independent Repair Providers (IRPs), offering a way for smaller repair shops to get their hands on genuine Apple parts without jumping through the hoops required to become a full AASP. While the Independent Repair Provider Program has been described as somewhat onerous — Apple still reserves the right to conduct surprise inspections, for instance — the lower barrier to entry allows many small businesses or even independent technicians to offer out-of-warranty Apple repairs, bringing the costs of these repairs down.

Unfortunately, these IRPs pay the same prices for genuine Apple parts and the necessary tools that AASPs do, and it’s not much less than what Apple charges in its Self-Service Repair Store. A survey of about a dozen IRPs across the U.S. revealed iPhone 12 and iPhone 13 screen repair pricing in the $230 to $300 range. Yes, some IRPs are charging more than Apple, most often those located in areas far from an Apple Store or AASP.

Some of the IRPs I’ve spoken with since Apple introduced the program have told me that it’s not worth it from a profitability point of view. Many have only remained in the program hoping to use iPhone repairs as a “loss leader” to bring in new customers.

You can shave quite a bit off your repair costs if you’re willing to seek out an unauthorized repair shop that’s not part of one of Apple’s repair programs, but you’ll also be doing so at your own risk. Apple isn’t lying when it says that genuine Apple parts work better for screen and battery replacements, but it is being slightly disingenuous. While there are dangers to using substandard parts, not all unauthorized parts fit into this category.

For one thing, many repair shops will salvage screens and batteries from iPhones that are otherwise unserviceable. Despite being used, these are still genuine Apple parts, and there’s no reason they can’t be repurposed to repair another iPhone as long as the shop is honest about it. There are networks of repair shops that work together to take advantage of trading in these types of replacement parts.

Apple’s repair costs have also created a significant gray market for genuine iPhone screens and batteries. In these cases, the parts are legitimate, but the sources of the parts aren’t. These methods, along with using parts legitimately manufactured by third parties, allow unauthorized repair shops to offer screen replacement prices significantly below those found in the AASP and IRP market. In my research, I encountered iPhone 12 screen replacements offered for as little as $120, although the median price from more reputable repair shops hovered closer to the $200 mark.

Unfortunately, to try and prevent this dealing in gray market and used parts, Apple has made it progressively more difficult each year to use “non-genuine” parts. Replacing a battery, screen, or camera system on recent iPhone models requires the service technician to pair the new component. If that’s not done, the iPhone will regularly alert you that it’s “unable to verify this iPhone has a genuine Apple part” and may even cause features like Face ID to fail entirely.

AppleCare+ and other protection programs

These high repair costs make a good case for buying AppleCare+ for your new iPhone. That will cover you for two incidents of accidental damage every 12 months for a deductible of only $29 per incident for a screen replacement or $99 for other types of damage.

Like most insurance plans, unless you’re accident-prone, you’re mostly paying for peace of mind.

Of course, like most insurance plans, unless you’re accident-prone, you’re mostly paying for peace of mind here. Apple is hoping that you don’t break your screen while you’re betting that you will break it at least once during the life of your iPhone. However, AppleCare+ isn’t the only option. Most carriers offer protection plans for an additional monthly fee on your regular bill, most of which will let you take your iPhone to an Apple Store for the same level of service you’d get with AppleCare+.

There are also independent insurance programs like Allstate’s Squaretrade that may offer better options for your individual needs. For instance, some charge a fixed deductible regardless of the type of repair; these usually work out higher for screen replacements, but can save you money for other types of damage. They may also offer a higher number of incidents or different types of coverage. So, it’s worth shopping around to see what’s available. Repairs under these programs are still conducted by an Apple Store or Authorized Apple Service Provider; either the company has an AASP it deals with, or it reimburses you directly for the cost of the out-of-warranty repairs.

What’s the takeaway here? If you break the screen on your iPhone, you’ll probably wish you had AppleCare+ or a similar extended warranty. What you may not want to do is try to repair it yourself unless you’re very handy with some rented spanners.

Memorial Day Deal: Save $500 on this Alienware gaming PC today