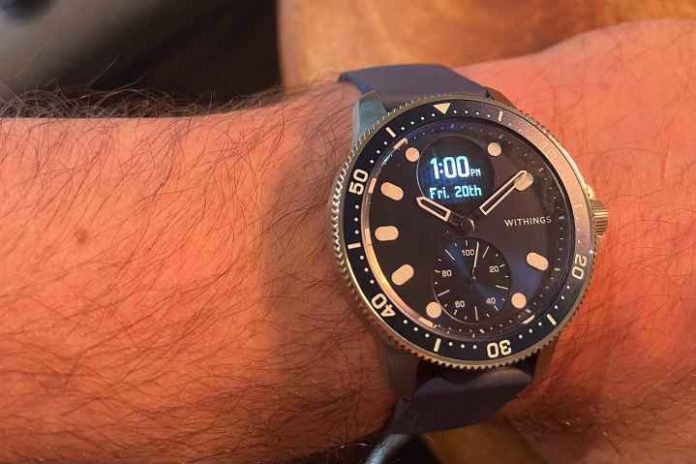 I’ve been wearing smartwatches like the Apple Watch Series 7 for years, so it wasn’t until I tried the new Withings ScanWatch Horizon that I finally realized how great an experience it is to use an analog watch.

If you hate the look of most smartwatches, including the Apple Watch, you might love the rugged Horizon. There’s no touchscreen, only a tiny display hidden inside the analog face, which shows notifications.

The Horizon looks and feels like a tank if that tank were made by Rolex. It has a chunky 43 mm body about half an inch thick. The weight of the Horizon made my arm tired before I got used to it. I got a lot of compliments on the look of the Horizon, though, which I can’t say for the Apple Watch.

The Horizon comes with both a metal and plastic band. I used the artificial band and found it comfortable and easily adjustable.

However, I’ve been wearing the dainty Apple Watch Series 7 for so long that I forgot that even though big analog watches might be heavy, they feel great on my wrist. The bold look of the Horizon made me feel like I could use it to fend off a giant squid on my next diving adventure, even though I spend most of my days in front of a laptop.

The outdoorsy design of the Horizon has practical advantages as well. It’s rated to withstand 10 atmospheres of pressure. I haven’t had a chance to test this extreme depth rating yet, but the Horizon worked fine after a shower.

One of the things I like best about my Apple Watch Series 7 is the plethora of fitness features it has, and I was pleased to find that the Horizon can keep up. The Horizon has sensors to measure heart rate, blood oxygen, and ECG. Withings notes in its instructions that although the ECG is FDA-cleared, it cannot detect heart attacks and other medical conditions.

I downloaded the Withings Health Mate app for iOS, and it synced up with my Apple Health within seconds. I found the Health Mate app a delight with a straightforward yet intuitive interface that beats Apple’s vaunted design. The app was so well done that it inspired me to order one of Withing’s connected scales, which keeps track of your weight.

In my tests, the Horizon did an excellent job tracking my workouts. Whether it was going for a bike ride around New York City’s Central Park or just walking around my neighborhood, the heart rate and step counts seemed to match up with the readings provided by my Apple Watch. Note that the Horizon lacks a GPS, so it won’t be able to record where you do your exercise, a feature that I missed from the Apple Watch.

I did miss the predictive power of the Apple Watch, which gauges when you are exercising and prompts you to measure a workout. With the Horizon, you have to tell the watch you are starting to do an activity.

Perhaps the most significant adjustment to using the Horizon after spending a lot of time with the Apple Watch and various Wear OS devices was that the Withings gadget provides a lot less interactivity. At first, this was annoying as when I barked instructions at my wrist even though the Horizon lacks a voice assistant.

Speaking of which, I also missed the Apple Watch’s microphones which let it function as a speaker for my phone calls. It would have come in handy to make phone calls from the Horizon or ask Siri a question a few times.

After a few days of testing out the Horizon, I realized that I didn’t miss all the functions of my Apple Watch as much as I thought I would. It was rare that I needed to interact with all the many software features of the Apple Watch. Mostly, I use the Apple Watch for its ability to provide notifications, which the Horizon does just as well, albeit in a more subtle fashion with haptic feedback and through the tiny display screen. I should note that the little display is surprisingly legible even though it’s low resolution and monochrome, and it worked fine to inform me of the contents of texts and emails.

One good thing about the lower-tech display on the Horizon is that it results in longer battery life. Withings boasts that you’ll be able to get up to a month between charges. I haven’t had the Horizon long enough to test this claim, but it seems consistent with my usage so far.

The lack of a bright display on my wrist had other benefits. I was less distracted by the analog display on the Horizon than on my Apple Watch. I have become so used to pinging notifications that follow me everywhere that it was a relief to be able to tune out for a while, still knowing that I would get essential messages.

Should you buy the Horizon? That depends on whether you are willing to give up many features of the modern smartwatch, like the ability to use it as a phone and a voice assistant. You also have to be OK with the huge design of the Horizon. Personally, though, the Horizon convinced me that its combination of vintage and futuristic tech is the best of both worlds.