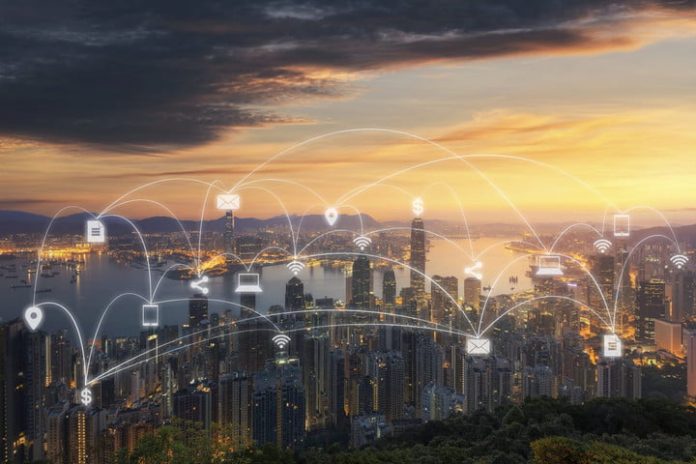 You may have noticed that the rollout of 5G has been much more complicated than prior advancements in cellular technology. Certainly, in the days of the 3G and 4G/LTE rollouts, we weren’t hearing terms like “midband,” “C-band,” “mmWave,” and “sub-6GHz” being thrown around.

Of course, those technologies didn’t promise to revolutionize wireless communications the same way that 5G has. It’s fair to say that even the best 4G/LTE service was mainly limited to use by smartphones and tablets. By contrast, 5G is already becoming a viable replacement for home and business internet services.

After all, 5G can deliver the fast speeds and lower latency that were once the exclusive domain of expensive broadband wired plans. However, all that power comes with its own set of challenges.

Chief among these is finding the best frequencies for 5G radio signals. The airwaves aren’t getting any less crowded, and carriers and regulators have to figure out where to put these 5G signals so they won’t interfere with anything else.

However, for 5G to deliver on its promise, it also needs to break new ground in the radio spectrum, using frequencies that have never before carried cellular services.

There’s a direct relationship between frequency, speed, and range when working with radio frequencies. Higher frequencies provide more bandwidth, which means faster speeds, but they can’t cover nearly as wide an area. Lower frequencies travel much farther and can even penetrate solid objects like walls much more effectively, but they’re comparatively slow.

You’re probably already familiar with this concept if you’ve ever tried to optimize your home Wi-Fi router. The 2.4GHz band gives you better range at slower speeds, while the 5GHz band delivers faster speeds at a shorter distance. It’s the same principle with cellular frequencies.

In your home, this can be solved by moving your Wi-Fi router to a better location or investing in a mesh Wi-Fi system to provide extra coverage. Cellular carriers need to do essentially the same thing; using higher frequencies requires that they build more towers.

Now, since we expect 5G to be significantly faster than the cellular services that came before, it needs to run on higher frequencies than the older 3G or 4G/LTE services did. Although 5G offers some innovations that allow it to make better use of whatever bandwidth it has, it’s still limited by the laws of physics as to how much data it can pack into a given frequency.

The battle for spectrum

Of course, cellular signals aren’t the only things using the airwaves. Even in your home, everything from your Wi-Fi router to your garage door opener operates in the same general radio frequency (RF) spectrum. In the broader world, there are amateur radio services, aviation equipment, maritime radio, GPS, meteorological equipment, and much more.

To prevent all these things from interfering with each other, the U.S. Federal Communications Commission (FCC) regulates which frequencies can be used and who can use them through licensing arrangements.

Before 5G came along, cellular services had always lived in the zone from 600MHz to 2,300MHz (2.3GHz), mainly concentrated around 800MHz and 1.9GHz. Carriers acquired licenses for this spectrum from the FCC many years ago, and since newer technologies like 3G and 4G/LTE operated in the same range, there was rarely any need to buy new spectrum.

That all changed when 5G arrived. While running 5G on these lower frequencies is still possible, that’s not its ideal home. Low-band 5G will only offer incremental performance gains over 4G/LTE for various reasons. To truly benefit from what 5G has to offer, carriers needed to get their hands on some higher-frequency spectrum.

Above the frequencies most commonly used for cellular services sits the “midband” or “midrange” spectrum. While this runs from 1GHz to 6GHz, the “5G midband” is considered to be in the 2.4GHz to 4GHz range. This is also the sweet spot for 5G. It provides the best balance of performance and range; it can deliver significantly faster speeds than 4G/LTE without requiring that carriers deploy hundreds of additional towers.

This is where the “C-band spectrum” that we’ve all been hearing so much about lately is located. “C-band,” in this case, refers to the 3.7–3.98GHz spectrum that the FCC auctioned off in early 2021.

However, technically speaking, the frequencies from 2–4GHz are designated as part of the “S-band,” while the C-band runs from 4-8GHz. When the FCC went looking for some spectrum that could be reallocated for 5G use, it managed to find a chunk from 3.7–4.2GHz that could be freed up, and since that crossed into C-band territory, it chose to use that name for the whole block of spectrum.

The 3.7–4.2GHz band was initially allocated for use by Fixed Satellite Service (FSS) for transferring data from space to Earth-based stations. Since it was paired with the 5.925-6.425GHz band for sending signals back into space, the entire block was known as the “conventional C-band” since that’s where the bulk of the signals lived.

The FCC was able to carve out 280MHz of spectrum in this band — the 3.7–3.98GHz frequencies — for use by 5G operators. This became part of the landmark 2020–2021 FCC auction in which Verizon paid a record-breaking $45.4 billion to get its hands on this essential new spectrum.

Once the dust had settled on the FCC’s spectrum auction, Verizon and AT&T quickly got to work making use of their new frequencies, planning to begin rolling them out on December 5, 2021.

Unfortunately, controversy ensued when the Federal Aviation Administration (FAA) and the U.S. Department of Transportation called for a delay in the rollouts, warning that the new frequencies were dangerously close to the 4.2–4.4GHz range used by aircraft radar altimeters. After a series of delays, on January 19, 2022, the two carriers turned the key on their new midband service, finally delivering true 5G speeds to their customers.

Verizon incorporated the new C-band into its 5G Ultra Wideband Service, initially rolled out using the much higher-frequency and shorter-range mmWave spectrum. The result, the carrier said, was that more than 100 million more people would be covered in more than 1,700 cities.

AT&T has taken a slow-but-steady approach, initially rolling out its C-band spectrum in only seven cities, with plans to expand gradually.

However, AT&T has also played its cards more carefully. While Verizon put all of its money down on the 3.7–3.98GHz auction, AT&T hedged its bets, picking up a bit of the higher-frequency spectrum but holding off until it could fetch a less controversial chunk in a later auction: 40Mhz of spectrum in the 3.45–3.55GHz range.

The rollout of 5G services on the new C-band spectrum is already transforming the 5G landscape by allowing all three carriers to offer the speeds that 5G was born to deliver.

Before the C-band rollout, AT&T and Verizon were stuck using lower-frequency spectrum and sharing that with their 4G/LTE networks using Distributed Spread Spectrum (DSS) technology. The result was 5G speeds that were barely distinguishable from 4G/LTE service.

T-Mobile was the only carrier that was ahead of the game. Thanks to its 2020 merger with Sprint, the Un-carrier had gotten its hands on a larger swath of 2.5GHz spectrum previously used for Sprint’s 4G/LTE services. It quickly decommissioned those Sprint towers and repurposed that spectrum for its Ultra Capacity 5G service.

As a result, T-Mobile reached more than 200 million customers with impressive 5G speeds months before AT&T and Verizon could even begin their C-band rollouts. This is why T-Mobile has been consistently ranked number one in 5G performance, coverage, and reliability.

However, that gap has been closing over the past few months as Verizon and AT&T put their new C-band spectrum to good use. Although T-Mobile also picked up some of that spectrum in last year’s auction, it’s using it to supplement its existing 2.5GHz network rather than to set up entirely new cells.

While T-Mobile has had an obvious head start, AT&T and Verizon may have a decided advantage by exclusively using the higher C-band frequencies. It won’t be as significant as the move from low-band to C-band, but the 3.7–3.98GHz spectrum should still allow both carriers to offer even faster speeds, even if it means they have to build a few more towers to ensure optimal coverage.