HomeNewsThis Microsoft app could help you spice up your desktop
News 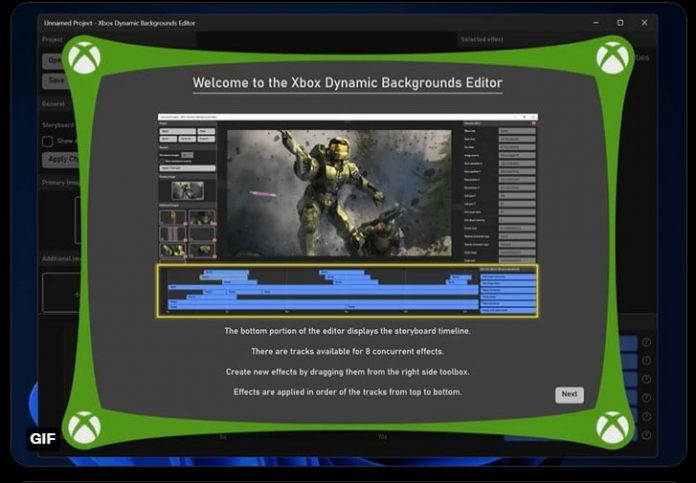 If you’re looking to spice up your Windows desktop in a new way, then you might want to keep an eye out for an item that may be coming from Microsoft soon. Reportedly in the works is an app that can help you create animated backgrounds with custom effects for Xbox consoles, as well as Windows PCs.

First teased as an “unknown project” by the well-known Microsoft leaker Aggiornamenti Lumia a few months ago, it looks as though the leaker has finally managed to reveal what Microsoft was working on. Aggiornamenti Lumia now believes that the project is the Xbox Dynamic Backgrounds Editor app, showcasing it partly in action.

Based on the shared GIF of the app, it looks as though the Xbox Dynamic Backgrounds Editor might work a bit like Wallpaper Engine — an app that lets you create live wallpapers on Windows. It has a storyboard timeline, tracks,  new effects, adjustable attributes, and the ability to adjust an image’s properties. According to Windows Central, it also looks like there’s a way to add eight custom concurrent effects, as well as custom assets and other tools. Any created wallpapers might even be able to be applied to Windows PCs, too, per the publication.

Of course, Microsoft has yet to acknowledge that this app exists. That suggests that instead of being a public app that everyone can download, this could just be an app intended for developers to use to create official Xbox Dynamic backgrounds. Or, it could be an internal app that never will go public. Adding to that is the fact that the app would need to be tested first through the Xbox Insider Program, as many Xbox-related things have undergone in the past. This is done so that Microsoft could gather proper feedback before rolling it out to everyone else.

But don’t be vexed if this app never actually launches. In addition to Wallpaper Engine, you can use Bionix’s GIF Wallpaper, to animate your desktop and make it spicier. Microsoft also has the Bing daily wallpaper app that you can download, so you get a new image from Bing as your wallpaper each day.