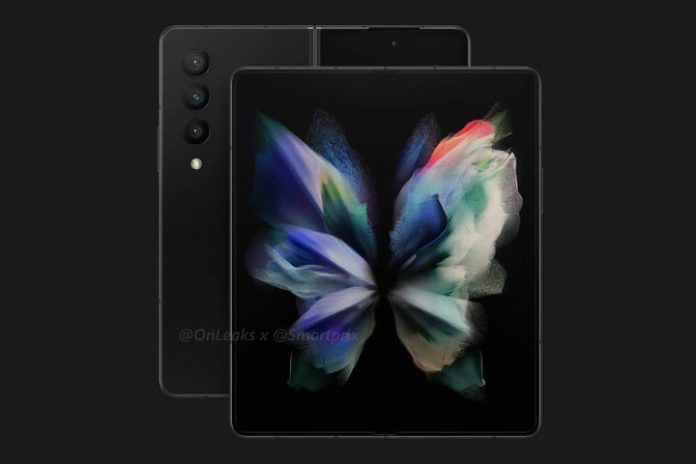 Samsung’s next foldable has finally appeared in alleged CAD-based renders, giving us our first glimpse of the Galaxy Z Fold 4. The latest set of images depicting the Galaxy Z Fold 4 come courtesy of reliable leakster OnLeaks (via SmartPrix) and they show an interesting amalgamation of familiar design elements. The phone appears to lean more toward flat sides and straight lines, without any camera island in sight.

Instead, Samsung is chasing the individual camera lens ring design that we last saw on the Galaxy S22 Ultra. To put it simply, the fresh design approach looks a lot cleaner than the Galaxy Z Fold 3. The dimensions are also changing, as the upcoming foldable will reportedly be 3mm shorter, but nearly 2mm wider and about 0.7mm thicker than its predecessor.

The aspect ratios of both screens have reportedly undergone a slight change, but there is no word on resolution or refresh rate figures. The selfie camera on the cover display is housed in a hole-punch cutout drilled at the top, an approach that falls in line with Samsung’s Infinity-O design language. The selfie snapper on the inner foldable display is said to employ a refined version of the under-display camera tech.

According to an older rumor, the primary camera might get an upgrade to a 108-megapixel sensor. The hinge design looks unchanged, but it’s unclear if Samsung has made any design changes here. From the 360-degree renders that have surfaced online, it appears that Samsung has slightly trimmed the bezels on the cover display, as they now look more proportional and cleaner.

Another leak suggests that the Galaxy Z Fold 4 will come equipped with a 4,400mAh battery, which is the same size as the Li-ion unit fitted inside its predecessor. Obviously, there isn’t any battery capacity upgrade here, but Samsung just might change things around with faster charging speeds.

A closer look at the rear camera array suggests that a periscope-style telephoto camera, which relies on a prism element to deliver a higher optical zoom range, won’t be a part of the package on the Galaxy Z Fold 4. But so far, no reliable leaks have surfaced online that could detail the camera hardware of Samsung’s next foldable.

If one were to take an educated guess, the Galaxy Z Fold 4 would go for Qualcomm’s Snapdragon 8 Gen 1 SoC. The upcoming foldable, alongside the Galaxy Z Flip 4 clamshell phone, is rumored to debut at the next Unpacked event in the second half of 2022.

Notably, the renders don’t show a garage for housing the S Pen despite stylus support on the device. Samsung recognized the demand for stylus input support on a tablet-sized screen, and duly enabled S Pen support on the Galaxy Z Fold 3. But this was no Note-level implementation, as the device still had no garage for keeping the S Pen. Needless to say, it’s extremely easy to misplace the accompanying stylus.

Samsung did some course correction with a stylus silo on the Galaxy S22 Ultra, which sparked speculation that a similar treatment will be given to the Galaxy Z Fold 4, as well. But if the latest leak is anything to go by, Samsung is apparently not yet ready to drill a stylus garage on its phone-tablet hybrid. Yes, it is no easy feat to place a stylus slot on a foldable phone that is already cramped for internal space, but doing so would have elevated the convenience aspect to a whole other level.