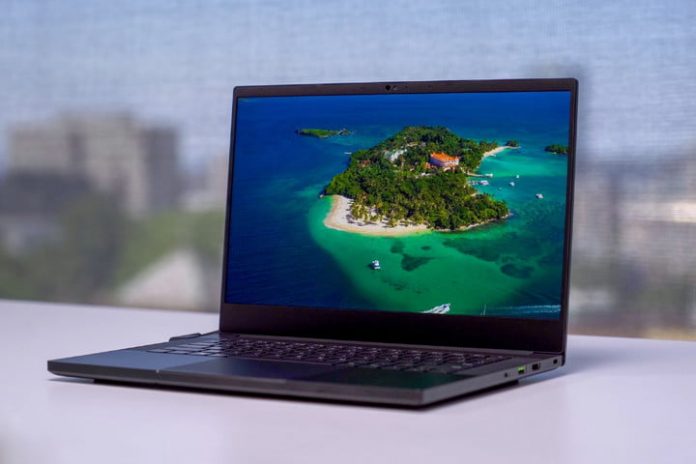 The 14-inch laptop has become increasingly popular in recent years by offering a larger display than 13-inch machines in a much smaller chassis than 15-inch and larger laptops. And two of the best are the Razer Blade 14 and the Apple MacBook Pro 14.

The Blade 14 took its place at the top of our list of best gaming laptops, offering incredible performance in a svelte chassis that no other gaming machine can match. At the same time, the MacBook Pro 14 has taken the market by storm thanks to its incredibly fast Apple M1 Pro and M1 Max CPUs that also offer some of the best battery life around. It sits at the top of our list of best 14-inch laptops. Which of these outstanding 14-inch laptops is right for you?

The Razer Blade 14 follows the same minimalist, all-black aesthetic as the rest of the range, with simple lines and only a green snake logo on the lid, adding some splash. In fact, one might say that its design objective is to match the Apple MacBook’s understated elegance. Outside of its silver color scheme, the MacBook Pro 14 looks a lot like the Blade 14 (or perhaps it’s the other way around), with a similar minimalist aesthetic that avoids any bling. Both are attractive machines, and choosing between them comes down to a preference in color.

Both laptops are also incredibly well-built, constructed from CNC machined aluminum. You won’t find any bending, flexing, or twisting in either laptop — they’re both among the best-built laptops you can buy. This is another criterion that does not assist in choosing between the two.

However, when it comes to the keyboard, there’s a clear distinction. Sure, the Blade 14 has per-key RGB lighting with 15 levels of brightness and a comfortable design with large keycaps and plenty of spacing. The switches are also very good and rank among the best you’ll find on a Windows laptop. However, the MacBook Pro 14 benefits from Apple’s Magic Keyboard, which replaced the butterfly keyboard, a source of tremendous controversy on earlier MacBooks. The Magic Keyboard doesn’t have a ton of travel, but its switches are incredibly precise with the perfect bottoming action, making for the best keyboard you can get on a laptop on any platform.

The touchpad is another distinct win for the MacBook Pro 14. Its large Force Touch haptic touchpad is sensitive, responds to clicks on every square millimeter of its smooth surface, and so closely mimics a physical touchpad that you can’t tell the difference. The Blade 14’s touchpad is very good for a Windows laptop, but it can’t match the MacBook’s.

Connectivity also favors the MacBook Pro 14. It offers three USB-C ports with Thunderbolt 4 support, an HDMI 2.0 port, a 3.5mm audio jack, and an SD card reader. The Blade 14 has two USB-A 3.2 Gen 2 ports, two USB-C 3.2 Gen 2 ports (without Thunderbolt 4 support thanks to the AMD chipset), an HDMI 2.1 port, and a 3.5mm audio jack. There’s no SD card reader available, which is disappointing. Both laptops offer Wi-Fi 6 and Bluetooth 5.0 for wireless connectivity.

The Blade 14 uses AMD’s fast Ryzen 9 5900HX CPU, an 8-core/16-thread chip that provides some of the best processor performance in Windows machines. In our review unit, the Ryzen CPU was paired with an Nvidia GeForce RTX 3070 GPU. You can configure the Blade 14 with up to an RTX 3080 for incredibly fast GPU performance in a relatively small package. We reviewed the MacBook Pro 16 with the Apple M1 Pro with a 10-core CPU (eight performance cores and two efficiency cores) and a 16-core GPU, which is available in the MacBook Pro 14, and both can be configured with up to an M1 Max with a 10-core CPU and a 32-core GPU. For this comparison, we’ll assume that the MacBook Pro 14 will be slightly slower than the 16-inch version but that the performance scores would be close enough to draw some conclusions.

In the real-world Pugetbench Premiere Pro benchmark, which runs in a live version of Adobe Premiere Pro, the MacBook Pro 16 with the M1 Pro scored 956 compared to the Blade 14’s 537. That’s an impressive result, even assuming the MacBook Pro 14 is slightly slower. Premiere Pro can take advantage of discrete GPUs, and the RTX 3070 is faster than the M1 Pro’s integrated GPU.

The only area where the Blade 14 will have a distinct performance advantage is in gaming. If you want a laptop that’s fast for both creative work and for gaming, then Razer’s laptop is a solid choice. However, if you’re strictly a creator, the MacBook Pro 14 will provide better overall performance. Note that Razer has recently introduced a Blade 14 with the new AMD Ryzen 9 6900HX CPU that’s likely to be significantly faster than the version we reviewed, but we don’t yet have benchmarks on that machine.

The MacBook Pro 14’s display is excellent for creators and anyone else who wants a bright and color-accurate display with deep contrast. It also benefits from its 16:10 aspect ratio that’s more productivity-friendly than the Razer 14’s old-school 16:9 aspect ratio.

In width and depth, the Blade 14 and MacBook Pro 14 are within fractions of an inch of each other. The MacBook is slightly thinner at 0.61 inches versus 0.66 inches and lighter at 3.5 pounds versus 3.92 pounds. Both laptops are thin and light enough to carry around without breaking your back, and they’re close enough that you likely wouldn’t be able to tell the difference.

That’s almost twice the longevity from the MacBook Pro 14. You get a ton of power with incredible battery life from Apple’s machine, and the Blade 14 can’t keep up.

The MacBook Pro 14 is the better all-around laptop

If you’re a gamer who wants a fast machine for productivity and creativity, then the Razer Blade 14 is a great option. However, for most users, particularly creators, the MacBook Pro 14 offers better all-around performance, exceptional battery life, and a much better display, making it the overall winner.