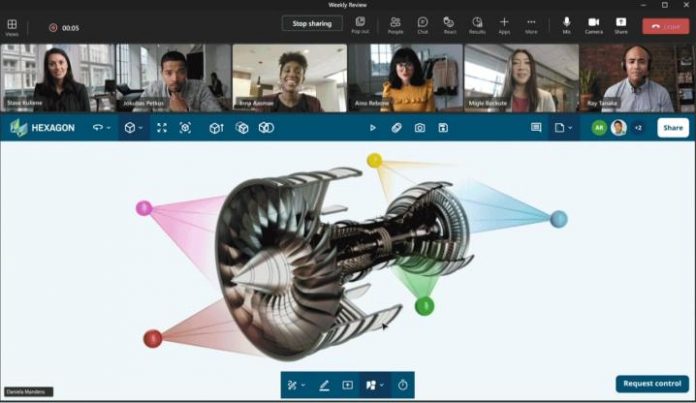 At its annual Build developer conference, Microsoft has announced Live Share for Microsoft Teams, a new feature that could replace boring screen shares. The experience is designed to make your meetings more collaborative and engaging, so that you can interact with and share content in a meeting in new ways.

As seen in the example above, with Hexagon Live Share in Teams, engineers can annotate and edit 3D models and simulations in Teams. The Teams video feed is at the top of the app, where everyone can see each other, and the 3D model is at the bottom, with controls for pointing out a specific viewpoint, and requesting control of the model.

New extensions to the Teams SDK, which is now in preview, will enable developers and independent software vendors to build these capabilities into their apps. The tooling for the experience is based on Microsoft’s Fluid Framework. Partners Microsoft has worked with on the feature include Hexagon, Frame.io, Skillsoft, and Makecode. Extensions for developers to access are already available on Microsoft’s website.

Since Teams is the focus for Microsoft at Build, several other features were announced for the service. For instance, coming this summer, there’s a new Link Unfurling feature. If enabled by an app developer, it will allow users to preview content associated with a link shared in Teams, even if that app isn’t installed.

That is not to forget the other Teams features which Microsoft hopes could offer new ways for developers to grow user engagement in Teams. These include Teams App Store updates to help improve discoverability, APIs for in-app purchases, and new license management capabilities for Teams apps. There are even several new collaborative apps from Microsoft’s partners, like the Bosch Cognitive Service Maintenance app, Figma, and the MURAL app for Teams.