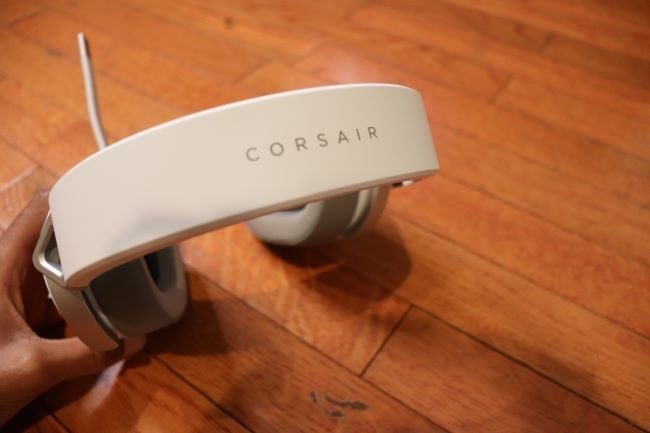 The Corsair HS80 RGB Wireless is one of our favorite gaming headsets at Digital Trends. But it’s expensive — no doubt about that.

Fortunately, Corsair has announced a trio of new wired gaming headsets: The HS65 Surround, HS55 Stereo, and HS80 RGB USB. Each sells for under $100 and offers many of the features and design cues that made us love the HS80 RGB Wireless.

The three headsets are differentiated by price, yes, but also features such as surround sound support, high fidelity audio, microphone optimization, or RGB designs. I tried all three headsets and came away thinking that most gamers are likely to find one among the three that suits their needs.

The new Corsair headsets all have distinctive designs for their price points. They are all corded headsets and made primarily of plastic, but they are all sturdy enough to feel like they will last a long time. Coupled with two-year warranties, Corsair also puts some parts and handling support behind the products.

Corsair appears to be taking cues from its prior models, including the HS50 and HS60. Those models were critiqued for their easy-to-lose parts, such as their detachable microphones, but the new headsets all have built-in mics, which can only be folded up.

As can be expected with gaming most headsets, be prepared for software setup. Some of the models come with dongles to ensure their highlight features work. A unique aspect is the use of USB-A ports and adapters, especially at a time when USB-C connectors have been associated with high-quality sound.

The HS65 Surround model comes in a white, grey, and silver color option. The silver accents shimmer in the light to give a higher-end look, but you can still tell the headset is more midrange. This isn’t exactly a problem — as said, the design isn’t at all flimsy.

The head cushion and earcups are made of a leather-type material and the innermost cups are coated in a cloth. The outermost cups feature the Corsair sail logo embedded in a grate for a design touch that is different from the other models.

At 282 grams, or 0.62 pounds, I found the headset had a bit of heft to it, though it was more tight than heavy. Adjusting the band did help a bit, but I overall wonder how comfortable this headset might be for those with larger heads.

I did notice some scuffs on the matte white parts pretty early on, so that is something to keep in mind. If you’re someone who likes to keep their peripherals clean, keep some wipes handy.

The HS65 Surround features a volume toggle on its left cup and its Dolby 7.1 Surround sound USB adapter aids the headset in maximizing audio for PC gaming. Installing Corsair’s accompanying software unlocks other features, such as SoundID audio customization. Without the dongle, the headset supports a 3.5mm audio jack.

The HS55 Stereo model has the most simple design of the three. The all-black matte frame with a black faux leather head cushion and ear cups, and shiny black logo accents on the outermost cups give the headset an appeal.

The headset is designed to be lightweight at just 273 grams. Its primary port is a 3.5mm audio jack, but it also includes a Y-cable adapter with a microphone and audio ports for PC input. The HS55 Stereo does not require any additional software support.

The HS80 RGB USB is the most premium of the models with an RGB logo to highlight its design. The headset comes in an all-black, matte texture, with an interesting adjustable velcro inner headband and a faux leather cushion. They’re slightly challenging to detach and adjust in comparison with a more standard method of adjustment.

I’d imagine there’s some ergonomic purpose to this design, as, at 373 grams in weight, the headset doesn’t feel nearly as heavy as it seems. It also includes plush earcups in a deeper black than the rest of the headset. Its port selection is strictly USB-A, with no additional adapters available.

Each of the different headsets includes some different software features. In particular, the SoundID feature is highlighted on the HS65 Surround model, and the RGB lighting effects on the HS80 RGB USB model.

The HS65 Surround SoundID is essentially an audio test that allows users to create their ideal sound experience, using different audio styles as a base tune. I kept this in mind, especially when listening to the music.

I chose Electronics Beats 1 and Cymatics as my base track among different tests. You’ll have to identify any changes in the audio until the test is complete. You can retake the test at any time to reset your audio preferences for SoundID. You can also turn the feature off entirely to enjoy standard stereo or surround sound audio.

The HS80 RGB USB RGB lighting effects settings are also available to customize the Corsair logo on the headset. There are a number of preset options, including watercolor spectrum, color pulse, color shift, and rainbow, and a lighting link section with more elaborate and editable designs such as color wave, rain, rainbow wave, and spiral rainbow. There is also a custom section where you can create your own designs.

All of the headsets have complimentary audio that most will find pleasing. The HS65 Surround, though, definitely stood out in terms of quality. The Dolby 7.1 surround sound USB adapter truly makes a difference in nearly all states of use.

I didn’t get too deep into a session of Destiny 2, but running the courtyard really took advantage of the surround sound ability, picking up various voice and step details from all around my character. There was a noticeable difference in the stereo audio when I plugged in the 3.5mm audio jack. While some of the detail can be recaptured by bringing up the volume, it’s not quite the same.

With the HS65 Surround, I preferred the audio experience with SoundID off.

Next, I played music to test the SoundID feature, using the song Believer by Imagine Dragons as my track for all of the headset models. However, for the HS65 Surround, I found that I preferred the audio with SoundID off. I enjoyed both states, but I favored the surround sound, which overall sounds richer and fuller.

As mentioned previously I repeated the test multiple times, and with different base tracks. However, SoundID appears to be a user orchestrated equalizer. Notably, the preset equalizer cannot function while SoundID is enabled.

The HS55 Stereo has great audio as the option with no bells and whistles. I found myself adjusting the volume for a better experience. Similar to the HS65 Surround without its adapter, voices and footsteps in gameplay sounded ever so slightly further away, but I was still able to catch details.

With the music, the heaviness that can be present when listening to surround sound was stripped away, but the quality was still present. I did have to tweak the volume on the headset and computer to get it right.

The HS80 RGB USB audio is also pretty good. I found I could settle at lower volumes than the other two headsets when listening to the music. The built-in surround sound on this headset is a bit muffled compared to the attached surround sound on the HS65 Surround, but I still found myself enjoying the audio experience while exploring a new game or watching a movie. Details were pronounced and easy to decipher.

I found that with the software installed the headset takes over the primary volume of the computer. I was able to use the volume rocker and see a dial appear on the screen, showing what I was listening to and the volume level.

The HS65 Surround will sell for $80, the HS55 Stereo for $60, and the HS80 RGB USB for $100. The headsets are currently available at Corsair.com, Amazon, and Newegg in limited quantities.