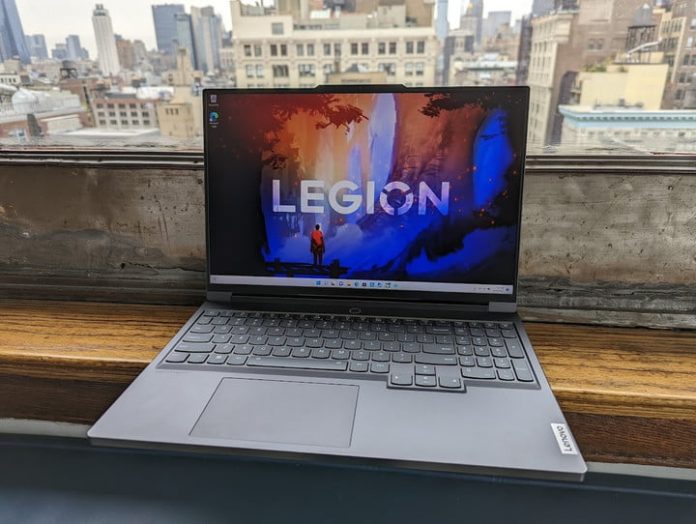 Lenovo’s Legion machines have been a popular gaming laptop option over the past couple of years. That’s thanks to the combination of great thermals compared to other options and the fairly affordable price.

This year, the Legion 7 is not getting a full reboot — just a small update. Notably, the battery is going from 80 watt-hours up to the max of 99.99. Lenovo has also enabled the laptop with a host of quick charging and slim adapter options.

The Lenovo Legion 7 and Lenovo Legion 7i refer to the AMD and Intel configurations, both of which feature the same 16-inch WQXGA screen with high refresh rates. At a preview event in New York, I got to check out the new system in the flesh ahead of its upcoming release.

I got a chance to try put the Lenovo Legion 7 and was especially fascinated by the build quality of the laptop. Earlier this year, I went hands-on with the much cheaper IdeaPad Gaming 3 models, which took inspiration from the aluminum-build Legion series to which this device belongs.

In comparison, the Legion 7 is nice and sturdy, and only slightly heavier at 5.5 pounds. But the bells and whistles that come with a premium design are definitely apparent in this system. The RGB “Legion” logo at the upper-right corner contrasts well with the sole Storm Gray color option. The metal trim around the base also adds to a high-end look.

The system is doused in color thanks to its per-key RGB lighting design. Lighting shines through various openings on the rear and sides of the laptop. Keep in mind that this feature can be turned off. Though it’s entertaining, I’m sure it can become distracting after a while and a battery drain for those doing intensive functions.

Other improvements include a 1080p built-in FHD webcam with a privacy e-shutter, which is among the ports along the sides of the system.

The dimensions of the laptop are 14.1 inches by 10.37 inches by as thin as 0.76 inches — the thickness can vary due to the component customizations.

The laptop models have 16-inch WQXGA IPS displays with a 16:10 aspect ratio and 500 nits of brightness. The base panel starts at a 165Hz refresh rate, however, there is also a configuration with a 165Hz to 240Hz variable refresh rate, which is surely excellent for gaming. The display also features a 3 millisecond response time, 100% sRGB color gamut, certification up to VESA DisplayHDR 400, Dolby Vision Support, AMD FreeSync Premium, and TÜV Rheinland certification.

While the display quality overall isn’t bad, ISP panels can leave certain viewing experiences feeling a little washed out, especially those with a lot of white or light colors. This was the experience I had watching some fan theory videos about Avatar the Last Air Bender and Avatar: Legend of Korra on YouTube, where there was a lot of white space for the standard viewing window.

I also viewed a video of some high-definition images on full screen, which had more dark tones and high-contrast tones, and found those presented much better on the display. This might be reflective of a user’s experience when gaming, with more dark colors when in a battle or strategy game or bright colors in a kid-friendly game.

The Lenovo Legion 7 features a full-sized keyboard and large trackpad, which is notable for the Legion series. There’s a lot of open space next to the trackpad, despite its size. Whether this is good or bad remains to be seen in the long term, but it was comfortable during my time handling it.

The manufacturer has made tweaks to the keyboard, bringing its travel up from 1.3 millimeters to 1.5 millimeters. Lenovo said this should translate into users experiencing a more cushioned feeling when typing.

The brand has also updated its software, which controls its RGB lighting, from its original Corsair IQ to a new proprietary program called Lenovo Spectrum. The software allows users to turn the per-key RGB lighting on and off, as well as customize it.

The laptop’s latest sub-keyboard vapor chamber cooling technology features 67% thinner fan blades, not only to consistently regulate the GPU and CPU temperature, but to also maintain the overall thin design of the system.

Other keyboard highlights are a 0.2-millimeter ditch for the keys, 100% anti-ghosting, and WASD force sensors with the option to swap keys.

Like on previous models, the input setup on the Lenovo Legion 7 is likely to please. Not only is there an array of ports, but they also feature light-up descriptors so users know which ports to access. The power doc shines red when plugged in, for example.

The Lenovo Legion 7 connects to 2×2 Wi-Fi 6E (802.11 ax), and I had minimal issues. There was some slight buffering, however, the demo space was not completely set up for Wi=Fi.

The Lenovo Legion 7 is powered by either the AMD Ryzen 9 6900HX or AMD Ryzen 7 6800H processor, depending on the configuration. Similarly, the Lenovo Legion 7i model features either a 12th Generation Intel Core i9-12900HX or a 12th Generation Intel Core i7-12800HX processor. Despite the difference in components, the laptop models are intended to perform similarly.

Obviously, this was just a preview event, so we’ll have to wait for the full review before we can evaluate the performance of this gaming laptop.

As previously mentioned, the Lenovo Legion 7 features a 99.99 watt-hour battery, which is the largest capacity legally allowed in a computer system when flying.

The Lenovo Legion 7 is also compatible with 300W and 230W slim adapters, and a 135W USB-C Power Delivery charger to aid in keeping the laptop light and easy to carry.

The 16-inch Lenovo Legion 7i with the Intel Core processor will be available starting in May 2022 with a starting price of $2,449.

The 16-inch Lenovo Legion 7 with the AMD Ryzen processor will be available starting in June 2022 with a starting price of $2,059.