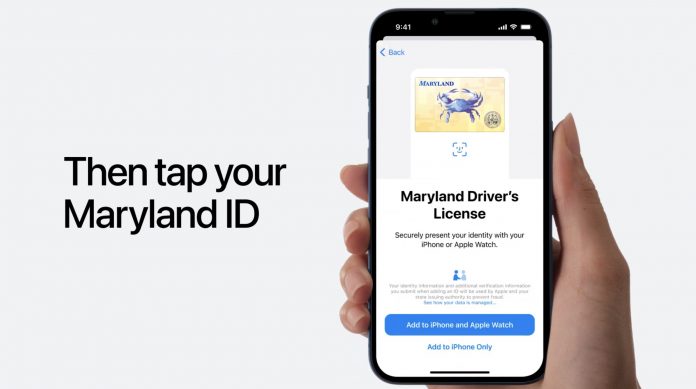 Maryland residents can now add their driver’s license or state ID to the Wallet app on the iPhone and Apple Watch, providing a convenient and contactless way to display proof of identity or age. The feature first launched in Arizona back in March.

When the feature launched in Arizona, Apple said additional U.S. states would offer driver’s licenses and state IDs in the Wallet app soon, including Colorado, Hawaii, Mississippi, and Ohio, as well as the territory of Puerto Rico. Apple also previously announced that Georgia, Connecticut, Iowa, Kentucky, Oklahoma, and Utah planned to offer the feature to residents, but it is unclear when each state plans to roll out the functionality.

To add an ID to the iPhone, Maryland residents can tap the “+” button in the top-right corner of the Wallet app, select “Driver’s License or State ID,” and follow the on-screen instructions. The user will be asked to take a photo of their face and scan the front and back of their driver’s license or state ID card, which will be securely provided to the issuing state for verification.

The feature is available in the U.S. only and requires an iPhone 8 or later running iOS 15.4 or later, or an Apple Watch Series 4 or later running watchOS 8.4 or later. Apple has yet to indicate whether the feature will launch in additional countries in the future.Tag: Apple Wallet
This article, “iPhone Driver’s License Feature in Wallet App Now Available in Maryland” first appeared on MacRumors.com