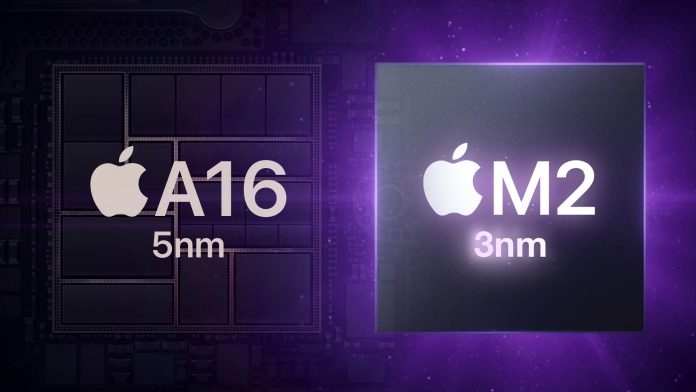 The iPhone 14 Pro’s “A16” chip may be a minor upgrade over the iPhone 13’s A15 Bionic and there are growing questions around the nature of the “M2” chip, according to reputable Apple analyst Ming-Chi Kuo.

Earlier this week, the leaker known as “ShrimpApplePro” postulated that the A16 chip for the ‌iPhone 14 Pro‌ models will be manufactured with the same process as the ‌iPhone 13‌’s A15 Bionic, with Apple potentially saving a bigger performance leap for M-series chips designed for its next-generation Macs instead. In a thread on Twitter quoting ShrimpApplePro, Kuo today corroborated these rumors about the A16 and ‌M2‌ chips.

Kuo said that since TSMC’s significantly better N3 and N4P fabrication processes will not be available for mass production until 2023, N5P and N4 are the latest viable technologies available for new Apple chips set to launch this year. Kuo believes that N4 has no meaningful advantages over N5P, the process currently used to manufacture the A15 Bionic chip in the ‌iPhone 13‌ lineup and the iPad mini, so Apple reportedly plans to stick with N5P for the A16 chip. The A16 chip’s performance and efficiency improvements over the A15 are therefore “limited,” according to Kuo, leading to the claim that naming the ‌iPhone 14 Pro‌’s chip the “A16” is “more of a marketing purpose.”

Kuo added that the redesigned MacBook Air, another device expected to launch this year, faces “the same technical limitations as A16” with N5P. He suggested that the 2022 MacBook Air’s complete redesign is “already a big selling point,” which may mean that boasting a major chip improvement could be less important for this device.

Instead, Kuo proposed that Apple may see more advantage in debuting the first ‌M2‌ chips in the next-generation 14- and 16-inch MacBook Pro models. While Apple could call the chip in the redesigned ‌MacBook Air‌ the “‌M2‌” to boost sales, despite it only minor upgrades over the existing M1, it may opt to save the “‌M2‌” name for a much more substantial upgrade over the previous generation in 2023 to further enhance Apple silicon’s brand image.

ShrimpApplePro previously claimed that Apple is working on the “final SoC of ‌M1‌ series,” featuring updated cores. The ‌M1‌, M1 Pro, M1 Max, and M1 Ultra chips use energy-efficient “Icestorm” cores and high-performance “Firestorm” cores – just like the A14 Bionic chip. Apple’s final ‌M1‌ variant will instead allegedly be based on the A15 Bionic, featuring “Blizzard” energy-efficient cores and “Avalanche” high-performance cores.

Kuo said earlier this year that the 2022 MacBook Air would retain the M1 chip rather than feature the ‌M2‌, so it is possible that ShrimpApplePro’s rumor relates to a new version of the entry-level ‌M1‌. Offering devices with a mid-generation iteration of the standard ‌M1‌ chip could help Apple buy time before releasing Macs with the ‌M2‌ chip.

Based on this information, it may be the case that the “true” ‌M2‌ chip does not emerge until 2023, with the chips in upcoming devices like the ‌iPhone 14 Pro‌ and redesigned ‌MacBook Air‌ bearing a strong resemblance to the A15. Moreover, the standard iPhone 14 models are rumored to retain the same A15 chip from the ‌iPhone 13‌ lineup. As a result, 2022 may be a year of more minor, iterative Apple chip upgrades, with bigger upgrades on the horizon for 2023 thanks to the availability of more advanced fabrication processes.Related Roundups: iPhone 14 Pro, 14 & 16″ MacBook Pro, MacBook AirTags: TSMC, Ming-Chi Kuo, M2, 2022 MacBook AirBuyer’s Guide: 14″ & 16″ MacBook Pro (Neutral), MacBook Air (Don’t Buy)Related Forums: MacBook Pro, MacBook Air
This article, “iPhone 14 Pro and Redesigned MacBook Air Reportedly Stuck Using Technology Behind A15 Chip” first appeared on MacRumors.com