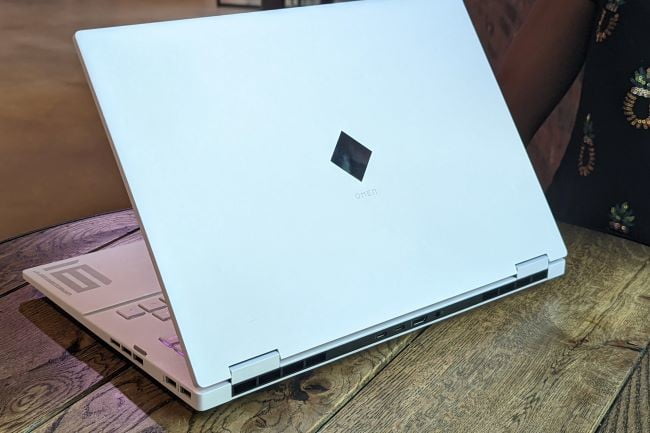 The HP Omen 16 was originally relaunched last year, sporting the company’s new premium branding and some slick design choices. HP’s second-generation is less of a revival and more of a refinement.

As the follow-up to last year’s Omen 16, which was held in fairly high regard, the new Omen 16 has focuses less on introducing flashy features and more improving its thermal system and every-day comforts for users. It comes in Intel and AMD configurations, but the new white color option is exclusive to Intel.

I got to check out the new Omen 16 (2022) and handle it up close at a preview event in New York ahead of its upcoming release to see if HP sweetened the deal enough to make this among the best gaming laptops available.

When it comes to design, the new white color option is certainly the biggest change over last year’s model. It’s striking at first glance, especially against the moving RGB lighting under the individual keys. Despite being made of aluminum, the light color with a shiny yet textured finish gave a plasticky impression up close. I didn’t get the same feel from the darker model that was on display, which I thought looked more high-end in comparison. However, I consider this mid-ranger will have had to have made some sacrifices somewhere, and it is easy to make a common laptop color like black look sleek.

At 16-inches, the Omen 16 isn’t small, but it was easy enough to carry around at 5.29 pounds. I took it to different areas in the studio for capturing images and had no issue with handling it.

The laptop has dimensions of 14.53 inches by 9.76 inches by as thin as 0.89 inches — the thickness can vary due to the component customizations. It’s not quite as thin as other gaming laptops like the Razer Blade 15 or MSI GS66 Stealth.

The other major change to the design is in the positioning of the ports. HP mentioned the movement of its main ports from the right side on the original Omen 16 to the rear on the new Omen 16 to make room for thermal heat vents and radiators. This also allowed for additional ports to the system with greater capabilities.

The updated design of the new Omen 16 has moved many of the main ports to the rear of the system. This was enough to add an additional USB-C port to the chassis, but overall the ports remain the same.

It includes two USB-C ports, which power Data, DP, PD, and Thunderbolt 4, depending on the model, an HDMI 2.1 port, and a DC-in port, all located in the rear. On the left is a USB-A port, RJ45 Ethernet (2.5G) port, a 3.5mm audio jack, and an SD media card reader, and on the right are two USB-A ports. Users can find this configuration on the Intel model in particular.

I found the new Omen 16 to work well connected to Wi-Fi 6E 2×2, despite sharing a connection with several other devices in the space; especially several other gaming systems. Loading websites, including DigitalTrends.com, was quick, and without issue.

While the display specifications on the new Omen 16 remain relatively unchanged year-over-year, the laptop does include some tweaks for comfort and safety. The display is a 16.1-inch monitor with a QHD maximum resolution, a 16:9 aspect ratio, and brightness between 250 and 300 nits depending on the model. It also features a 3-millisecond response time and a 100% sRGB color gamut. The flicker-free display supports refresh rate options of 60Hz, 144Hz, and 165Hz.

HP counts the addition of an auto-brightness sensor as its main upgrade to the new Omen 16 display. This feature allows the display brightness to adjust to its environment. I found this adjustment to be accurate as I moved from areas around the studio that were very dark to areas that had open, natural lighting and found no difference in how I experienced the display.

For an ISP panel, you’re not going to get that pop that you might from a different display type, like OLED, for example. However, the colors were consistent, and I found no glares or washed-out experiences in the different environments.

The display is also certified TUV Eyesafe for blue light for comfortable gameplay in dark settings.

The new Omen 16 also remains similar to the older model in terms of its keyboard and trackpad. Both models include a signature four-zone set-up for their RGB lighting. The keyboard has a per-key build to its RGB lighting. When users hit keys in one of the four zones: left, right, up, or, down, it sets off the RGB color in that area. It makes for a unique lighting aesthetic.

The trackpad, which is a little wider on the new model, at 135 by 86 millimeters in dimension, features a one-zone lighting trigger, meaning one click of the trackpad will light up the entire keyboard.

The biggest update on the new Omen 16 would have to be with its internals. HP explained its complete redesign of the thermal architecture after prior reviews noted the Omen 16 2021 was slightly noisy after being run for an extended time. Not enough to be overly annoying, but still noticeable.

Users can also implement features in the accompanying Omen Gaming software to maximize the performance of the new Omen 16. The Omen Dynamic Power feature reads real-time workload information from the system’s CPU and GPU in three-second intervals to decide which components should get the most power at any given time.

When gaming, the feature can decipher between a more GPU-intensive game, such as Witcher or Red Dead Redemption, and an AI-focused game that might use more processor power, such as Stellaris, HP noted.

For power, the new Omen 16 packs a four-cell 70-watt-hour battery, which sounds surprisingly low, considering the original system featured a six-cell 83-watt-hour battery. However, I consider this is a part of the brand’s power optimization of the laptop, or that the thermal redesign didn’t leave a lot of room for a bigger battery.

The system is also accompanied by a 200-watt smart AC power adapter.