HomeHow toHow to watch Nvidia’s Computex 2022 keynote
How to

How to watch Nvidia’s Computex 2022 keynote 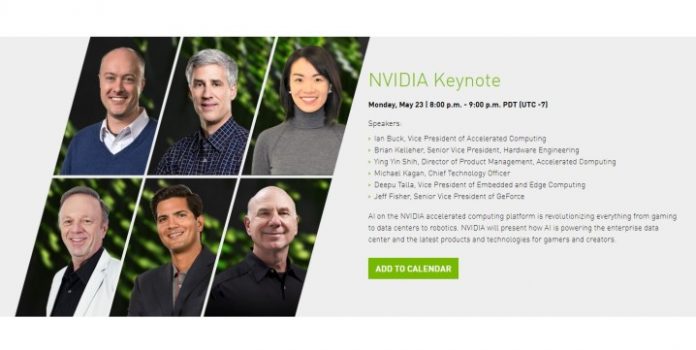 Next week, Nvidia will be presenting its Computex 2022 keynote, where the company will discuss current and upcoming products for data centers, professional applications, and gaming. It’s not entirely clear what exactly the company will be talking about, and although rumors range from a new low-end GPU to an announcement of next-gen GPUs, Nvidia is always very secretive so we’ll just have to wait and see.

Here’s where you can watch Nvidia’s Computex keynote and what you can expect the company to announce.

How to watch Nvidia’s Computex 2022 keynote

Six different Nvidia executives will speak at Nvidia’s keynote, which starts at 8 p.m. PT on May 23. Computex is hosted in Taiwan, which means their afternoon is America’s late night, so you might have to stay up late to catch the presentation.

Nvidia is likely going to stream the presentation on its YouTube channel, as it typically does for Computex and events like GTC. After the stream is over, we expect a recording to be available on the YouTube page.

Following the presentation, Nvidia will host a talk specifically about Omniverse, hosted by Richard Kerris, Nvidia’s vice president of Omniverse. The talk will cover “the enormous opportunities simulation brings to 3D workflows and the next evolution of A.I.”

What to expect from Nvidia’s Computex 2022 keynote

Nvidia is notoriously tight-lipped about its upcoming products. In fact, ever since the GTX 10-series, Nvidia has always announced new gaming GPUs just weeks before launch, which is very different from rivals AMD and Intel, as they tend to announce big products more than a month away from launch. So, we’re either on the cusp of the next generation (presumably the RTX 40-series) or still some months away.

One hint comes from the list of speakers. When it comes to gaming news, we’re really interested in Jeff Fisher, Senior Vice President of GeForce. He previously announced the RTX 3090 Ti at CES 2022, which has led some to claim that this is proof he’s back again to announce the RTX 40-series. But it’s hard to imagine Nvidia CEO Jensen Huang not announcing the launch of a new generation of gaming GPUs in his famous kitchen. If Fisher is announcing a new gaming GPU, it’s more likely to be the rumored GTX 1630.

There are five other speakers at Nvidia’s keynote, but they’re expected to talk about data centers, professional GPUs, and automotive, not gaming GPUs. Unfortunately, if you’re not really into enterprise-grade hardware, you probably aren’t the target demographic of this keynote. Still, Nvidia does what Nvidia wants and we can never be too sure what it’s going to show at a big event like Computex.