HomeHow toHow to watch AMD’s Computex 2022 keynote
How to 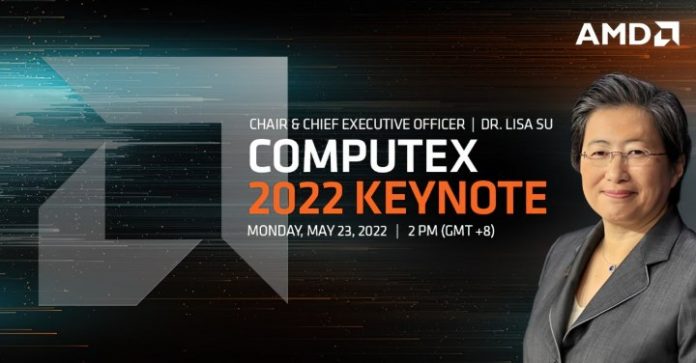 AMD is kicking off Computex 2022 with its annual keynote, which is almost sure to hold announcements for the company’s upcoming CPUs and GPUs. As usual, the company will be hosting a digital event, so we rounded up how to watch AMD’s Computex 2022 keynote and what you can expect out of it.

AMD CEO Lisa Su will deliver the company’s Computex 2022 keynote at 2 p.m. (GMT +8) on Monday, May 23. Because Computex takes place in Taipei, that means U.S. watchers will have to stay up late to catch the keynote live. It goes live at 11 p.m. PT on Sunday, May 22 (have to love those time zones).

The keynote is titled “Advancing the High-Performance Computing Experience.” Although we know the event will be led by Su, AMD hasn’t said if other executives will present at the event. We imagine they will, as the keynote is expected to last about an hour.

As AMD did last year at Computex, this year’s keynote will be digital. AMD hasn’t said where it will stream the talk, but we expect it will be live on AMD’s YouTube channel as has been the case for the last several AMD Computex keynotes. A replay of the event should go up after, as well, so you can catch the presentation in the morning if you’re based in the U.S.

If you want to watch live alongside us, you can sign up for notifications on AMD’s website.

What to expect from AMD’s Computex 2022 keynote

Only AMD and Nvidia will deliver keynotes at Computex this year, as Intel opted to make announcements at its own Vision event earlier this month. Out of the two, AMD’s keynote is shaping up to be stuffed full of announcements. We normally see new GPUs or CPUs, but this year, we may see both.

In addition, AMD’s current-gen Ryzen 5000 processors are starting to show their age. The recently launched Ryzen 7 5800X3D is the final processor in the range, and the current generation is missing features like DDR5 and PCIe 5.0. Rumors suggest Ryzen 7000 chips won’t include DDR4 support at all, instead opting for DDR5 only, which lines up with a recently leaked roadmap.

The other details about Zen 4 are fuzzy. AMD has all but confirmed the chips will use chipmaker TSMC’s 5nm manufacturing process, but we still don’t know what’s in store for core counts and clock speeds. There’s a good chance the new chips will utilize AMD’s 3D V-Cache technology, but the company has yet to confirm that detail.

CPUs are almost a sure bet, but we could see a glimpse at AMD’s upcoming RX 7000 graphics cards, too. We’ve long expected AMD’s next-gen cards to arrive at the end of 2022. There’s a good chance we’ll see them considering AMD just recently refreshed several cards in its RX 6000 range.

It’s possible we’ll only get a tease, but we could get a full reveal. Leaks are already circulating for AMD’s RDNA 3 architecture, suggesting performance that could rival Nvidia’s upcoming RTX 40-series cards.

Based on what we know now, it looks like Zen 4 for sure and perhaps a small look at RX 7000. It’s possible we’ll see both, however, and that’s exciting for Team Red. We’ll be covering all of the major announcements out of the event, so stay tuned to our Computex 2022 announcements page for all the details.