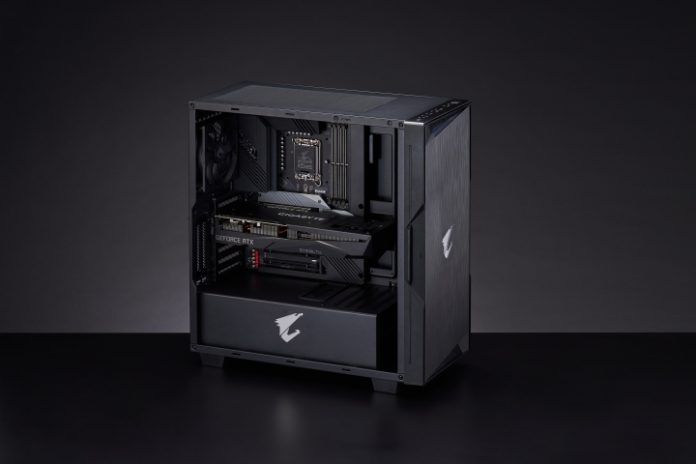 First revealed late last year, Gigabyte’s Project Stealth promised to solve the problem of cables once and for all. Now, the project is launching. Gigabyte has partnered with custom PC building company Maingear to sell a custom motherboard, GPU, and case bundle focused on making PC building easier and better looking.

If you’ve ever built a PC, you know how annoying and even physically painful it is to plug all the connectors in. The basic problem is that there’s often very little room inside a PC, even in the largest of chasses. So, what did Gigabyte and Maingear do to solve this decades-old problem? They reversed the direction of all of the connectors. All cables plug into the back of the motherboard and GPU in this build. Zero cables are plugged into the front of the motherboard, leaving everything in the back and hidden from view.

The Project Stealth bundle comes with a Z690 Aorus Elite Stealth motherboard, an RTX 3070 Gaming OC Stealth, and an Aorus C300G Stealth case. This barebones bundle comes from Gigabyte, and it’s available without the other components. This isn’t a proprietary solution, so you can pair this bundle with normal, off-the-shelf parts (maybe the of the best processors and some of the best RAM).

Gigabyte recommends a Core i5 or Core i7 CPU, but you could go all the way to a Core i9-12900KS if you have a good enough cooler.

Although these parts are not technically proprietary, they are probably best used together. The case can probably be reused for a future build, but the GPU’s power connectors could pose compatibility problems for some cases. The motherboard is very unlikely to be compatible with cases not specifically designed for it since all the connectors are on the back, and in most cases, the back of the motherboard is totally covered.

On the other hand, as long as you keep the case, there’s nothing stopping you from upgrading the GPU or motherboard. That would compromise the cableless aesthetic of Project Stealth, but that’s better than not being able to upgrade at all. And if Project Stealth is successful, perhaps we can expect more Project Stealth compatible boards, GPUs, and cases in the future.

The Project Stealth bundle is expected to arrive in early summer, but Gigabyte hasn’t confirmed a street date yet. The barebones bundle runs $1,200, which is about the same amount you’d spend on an RTX 3070, Z690 board, and a full-sized case. We don’t have word on pricing for the Maingear prebuilt machines yet.