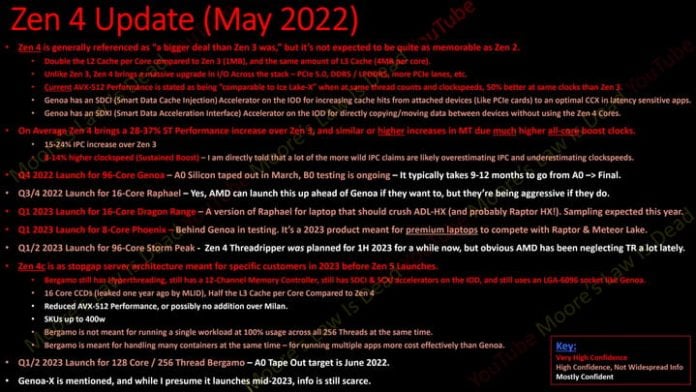 We’re still months away from the launch of AMD Ryzen 7000 “Zen 4” processors, but new leaks tell us more not just about Zen 4, but also about its successors: AMD Zen 5 and Zen 6.

Although there’s plenty to be excited about with the Zen 4, AMD seems to have even bigger performance jumps in store for us in the future, if the rumored architecture of Zen 5 is anything to go by.

This massive round of leaks comes from YouTube channel Moore’s Law is Dead. Citing anonymous sources, the YouTuber talked about what we can expect in terms of architecture from the upcoming AMD Ryzen chips. This includes both consumer-level chips (AMD Zen 4, Zen 5, and Zen 6) as well as Zen 4C, which is aimed at data centers.

The upcoming AMD Ryzen 7000 Zen 4 CPUs are said to retain a similar architecture to Zen 4 and will bring an upgrade in terms of cores and clock speeds. Zen 4 may bring a significant instruction-per-clock (IPC) boost, ranging from 15% to 24%. Single-threaded operations may see an uplift of 28% to 37%, and the same will be true for multi-threaded performance, although the boost may be even bigger.

As mentioned, clock speeds will definitely be higher in the Zen 4 lineup than they are in AMD’s current arsenal. Twitter user Petykemano has recently spotted what appears to be a very early benchmark of the AMD Ryzen 7 7800X. The processor hit 5.2GHz, marking a significant upgrade over its predecessor — the Ryzen 7 5800X can only hit up to 4.7GHz. However, it appears that the Zen 4 CPU retains the same number of cores as the Ryzen 7 5800X, appearing with eight cores and 16 threads in the benchmark. Keep in mind that the listing has since disappeared, so all of this is subject to change.

Zen 4 is also said to double the size of the L2 cache while keeping the L3 cache the same as in Zen 3. Another huge change for AMD, which is not news at this point, is the fact that the processors will finally support PCIe 5.0, DDR5, and LPDDR5. This will remove the edge Intel Alder Lake has had over AMD throughout the year, seeing as Zen 3 doesn’t support these technologies. On the downside, the rumor mill has been buzzing with the news that Zen 4 may have no DDR4 support whatsoever.

Lastly, the Zen 4 lineup will cover a vast range of processors. The DIY market will receive a full range of Ryzen 7000 Raphael CPUs sometime in the second half of 2022. Laptop users have AMD Ryzen 7000 Dragon Range and Phoenix to look forward to, with both set to release in early 2023. There are also AMD EPYC Genoa 7004 processors set to launch in the fourth quarter of 2022 and Threadripper 7000 Storm Peak in the first half of 2023.

Following Zen 4, AMD will release the 5nm-based Zen 4C, which will target data centers. While the AMD Genoa will utilize Zen 4 cores, the follow-up AMD Bergamo will switch to Zen 4C, bringing the core count up to 128 cores (whereas Genoa will max out at 96). Bergamo will also offer up to 256 threads, and it will be compatible with the same LGA 6096 socket as its predecessor. We can also expect 12-channel memory support.

We’re done with Zen 4, but there’s more to talk about, namely the future. AMD Zen 5 is still a while away, but all the sources cited by Moore’s Law is Dead expect it to arrive only 11 to 15 months after the launch of Zen 4. While that’s a short time, the CPUs are said to bring major upgrades, with a performance leap as big as Zen 2.

Zen 5 is said to come with a full architectural redesign, resulting in a huge IPC boost, seemingly larger than what the switch from Zen 3 to Zen 4 will bring. On the other hand, the clock speeds will not change much, but we will see changes made to the data fabric and a fully reorganized cache design. AMD’s Zen 5 processors are rumored to be based on TSMC’s N3 or N4P process node.

The first Zen 5 product line to ship may be the EPYC Turin CPU, set to arrive in the second half of 2023. The consumer-level products won’t appear for a while, with Ryzen 8000 Granite Ridge (desktop) expected in late 2024 and Ryzen 8000 Strix Point (laptop APU) in early 2025.

As for AMD Zen 6, we’re still a long while away from its launch, and by the time it’s released, it may not even be called “Zen” anymore. The naming convention seems to be a bit up in the air, but things on the specification front are quite exciting, including higher core counts and clock speeds, a new cache design, new accelerators, and more.

We can expect some degree of truth from the above information — Moore’s Law is Dead has delivered plenty of legit leaks in the past. Even so, as always, it’s best to take it all with some skepticism. That’s especially true for rumors about products that are still a couple of years or more away, such as the alleged Zen 5 and Zen 6. Even if the leaks are true now, AMD may still make some alterations along the way.