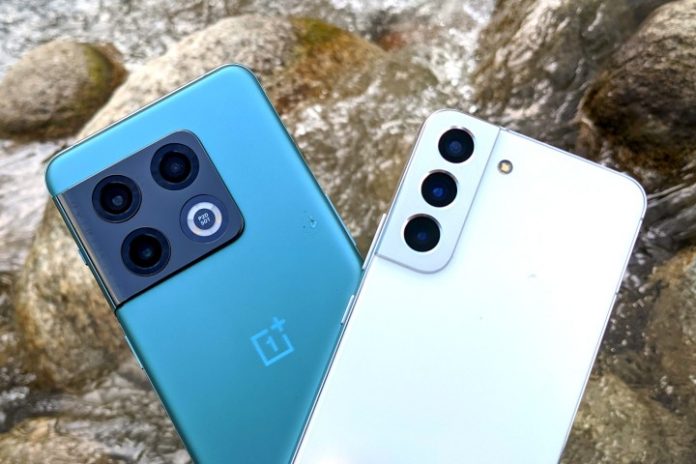 The OnePlus 10 Pro is turning heads with its brave new design, top-tier specifications, and upgraded camera hardware. Samsung, on the other hand, has armed the Galaxy S22 with a bigger primary camera without paying much attention to its outer garb. The OnePlus offering wants to make a splash as the company’s best phone on the market, while the Galaxy S22 is Samsung’s entry-level flagship, with far modest camera hardware compared to its Ultra sibling. But they are both similarly priced. Wondering how the two would fare in a camera shootout? Read on to find out.

On their own, both the phones feature a very capable primary camera, but the Galaxy S22 edges its OnePlus rival in some key areas. The Samsung Galaxy S22 goes for a more saturated look in daylight photos by default and produces a better contrast than the OnePlus 10 Pro’s main camera, which struggles with white balance under natural light. Both the phones produce terrific photos on their own, but the Galaxy S22’s camera algorithms race ahead when it comes to retaining surface textures. There is also less noise in pictures produced by the Galaxy S22.

The OnePlus 10 Pro, however, scores points with its more restrained approach to color science. The Galaxy S22 tends to go overboard with depicting the sky in daylight, which often looks far bluer in photos than it really is and also blows out the highlights. Under softer light, the Galaxy S22 aims for a warmer look in photos, a strategy that somewhat makes up for its struggles against harsh daylight compared to the OnePlus 10 Pro, which occasionally produces muted and whitewashed colors.

With HDR, it’s a different picture. OnePlus does a better job at bringing out colors and surface textures compared to the Galaxy S22 in daylight. Colors look punchier and finer details are sharper with HDR enabled on the OnePlus 10 Pro. At close range, the Galaxy S22 retains its superiority with better color contrast.

Neither phone comes equipped with a macro camera, but the telephoto lens does help capture fantastic shots with steady hands. Again, Samsung goes for a more pronounced contrast and higher saturation in close-up shots captured by the telephoto camera, which makes the photos look more appealing, even though the amount of surface details is almost at the same level for both the phones.

Edge separation for portrait selfies is neck and neck between the phones, with a fantastic bokeh effect in tow. The pixel-binned selfies taken by the OnePlus 10 Pro go for more contrast, which makes them look more appealing compared to the distinctly pale look in daylight selfies taken by the Galaxy S22.

However, lowlight selfies prove to be a mixed bag here. Samsung does a significantly better job at bringing out the colors — both in the foreground and background — but in doing so, the night mode algorithms perform aggressive smoothing of the skin texture and make the self-portraits look soft.

Some users might actually prefer a lowlight selfie that brings out more colors and shows more elements in the frame, while others would go for a more realistic appearance. At the end of the day, it’s a matter of personal preference.

But overall, the OnePlus 10 Pro turns out to be a better selfie snapper by a very small margin over the Galaxy S22.

The superiority of the OnePlus 10 Pro’s 50-megapixel ultrawide camera becomes apparent from the get-go. With its latest flagship, OnePlus has done a much better job at minimizing the color disparity between photos coming from the main and ultrawide-angle cameras. Compared to the Galaxy S22, the 4-in-1 pixel-binned ultrawide photos taken by the OnePlus 10 Pro do a much better job at retaining highlights and colors, especially around bright elements like clouds.

The ultrawide shots turn out sharper and when zooming in, finer details are more easily discernible in photos taken by the OnePlus 10 Pro than the Galaxy S22. OnePlus’ phone also does a better job at exposing edge elements in the frame.

Surface textures are better preserved, and objects in the background are noticeably sharper and discernible in photos taken by the OnePlus 10 Pro’s wide-angle camera compared to the Galaxy S22.

Ultrawide daylight image taken with the OnePlus 10 Pro.The denoising is quite aggressive and elements like tree foliage look choppy when the OnePlus 10 Pro’s 50-megapixel mode is enabled in challenging scenarios like indoors. When zooming in to the ultrawide shots, it becomes apparent that the Galaxy S22 does a better job at retaining surface details than the OnePlus 10 Pro in such situations.

The Samsung Galaxy S22 does a noticeably better job at illuminating objects in photos when night mode is enabled. The photos captured by the OnePlus 10 Pro lack sharpness and turn out noticeably grainier and noisier compared to those produced by the Galaxy S22.

I also noticed that the OnePlus 10 Pro routinely defaults to higher ISO and higher exposure time compared to low-light shots clicked by the S22’s main camera, and the difference is stark.

The Galaxy S22’s camera engages in some aggressive oversaturation when night mode is enabled, which tends to deviate from the real colors of objects, but the results are more pleasing.

This becomes evident while taking night sky shots. After all, night mode is about bringing out what’s hidden in darkness, and Samsung’s offering excels at highlighting those elements in the frame. Samsung’s phone does a significantly better job at showcasing surface textures, and the photos look crisper as a result.

One advantage of using the Galaxy S22 in lowlight scenarios is that it generally takes a few seconds longer to capture a night mode photo, and lets users manually go up to 8 seconds of data capture for capturing the scene. OnePlus doesn’t offer that luxury, and it reflects in the pictures, which are noticeably darker and lacking in detail.

A 3.3x optical zoom image taken with the OnePlus 10 Pro.

The OnePlus 10 Pro’s telephoto camera goes for a warmer look in photos with a distinguishable red tint, while the Galaxy S22 opts for a neutral look. But the zoom shots at the native magnification range turn out to be sharper with more surface details in the case of the Galaxy S22, compared to those I got from the OnePlus 10 Pro.

Thanks to the higher contrast in photos, the 3x optical zoom shots taken by the Galaxy S22 look more crisp and pleasant compared to the 3.3x zoom photos from the OnePlus 10 Pro, which appear softer.

A 10x hybrid zoom image taken with the OnePlus 10 Pro.

Both the phones excel at portrait mode, with great subject separation and exposure. But the Galaxy S22 edges past the OnePlus 10 Pro with a more natural depth effect and retention of surface details.

A Portrait mode image taken with the OnePlus 10 Pro.

In harsh daylight, the OnePlus flagship slightly struggles with white balance in portrait shots produced by its main camera compared to the Galaxy S22. When tested against nonhuman subjects like the puppy above, subject separation is again on point with impressive edge clearance and surface details.

A Portrait mode image taken with the Samsung Galaxy S22.

It is hard to choose one over the other. However, Samsung takes the lead in portrait photography in challenging scenarios such as indoors with dim light.

An indoor portrait image taken with the OnePlus 10 Pro.

Take a lot at the chessmen in the portrait shots below to see the difference. The Galaxy S22 does a much better job at recognizing the subject and detecting the edge compared to the OnePlus 10 Pro, while also delivering a more refined bokeh effect.

An indoor portrait image taken with the Samsung Galaxy S22.

The OnePlus 10 Pro is a vast improvement over the OnePlus 9 Pro on parameters such as camera lens color disparity, handling of shadows, and a vastly improved selfie camera. But the Galaxy S22 also comes with guns blazing to the battle with a 50-megapixel camera upgrade of its own and a more refined color algorithm compared to its predecessor.

Both the phones offer a ton of features to play with, and they are both extremely capable at their respective imaging games. But the Galaxy S22 takes the cake here with superior retention of surface textures, more vibrant colors, higher contrast, and a noticeably better night mode output. OnePlus takes the victory with better selfie performance, but its superiority over the Galaxy S22 at ultrawide photography isn’t very large.

The Samsung Galaxy S22 just turns out to be a better camera at more tasks than the Galaxy S22. Another important consideration is the price. The Galaxy S22 starts at $799 in the U.S., but can be purchased for much lower with an exchange offer or carrier deal. The OnePlus 10 Pro comes in at a premium of $100, which makes sense if one covets other goodies like a much faster charging experience, a bigger battery, a more advanced OLED display, and a fresh design. But when it comes to raw camera prowess, the Samsung Galaxy S22 proves to be the superior phone.