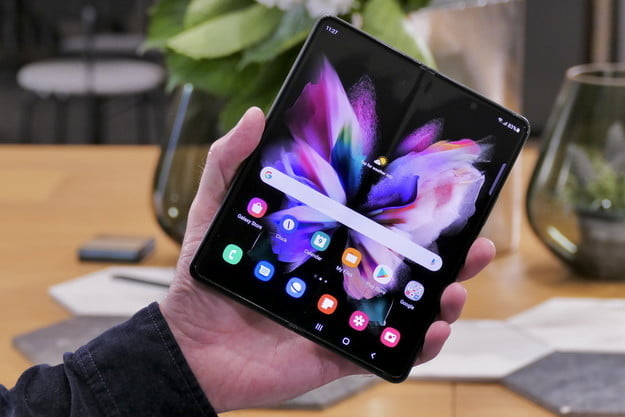 What you need to know about the Galaxy Z Fold 3

The Samsung Galaxy Z Fold 3 is a truly premium high-end smartphone so it kind of makes sense to buy directly from Samsung. The foldable you’ve been waiting for while technology has slowly figured out how to do things best, it’s a dream to use and look at. It has the same design and functionality of its predecessors but it’s far more durable than before. It has a limited 6.2-inch Cover Display on the outside before opening up to provide you with a huge 7.6-inch display on the inside. Basically, it turns into a form of tablet with the hinge mechanism making it a breeze to fold and unfold. If you’re bored of conventional looking smartphones, this one just made the world way more exciting than before.

The display is fantastic, as helped by its 120Hz refresh rate but that wouldn’t matter if the performance wasn’t great. Fortunately, the packs a lot in with its Qualcomm Snapdragon 888 chipset ensuring that it flies through whatever you happen to be doing. Samsung has improved app pairing and its slide-out dock so it’s simple to arrange the interface to use multiple apps at once without a problem. Unfolded, it really does feel like a fantastic Android tablet.

Elsewhere, the Samsung Galaxy Z Fold 3 lacks some camera prowess but it’s still pretty good. It offers a 12MP f/1.8 main camera along with a 12MP f/2.2 ultrawide lens and a 12MP f/2.4 telephoto camera with 2x optical zoom capabilities. None of that is fantastic compared to something like the most expensive of Samsung phones, but it still provides you with sharp imagery with great colors. Including S Pen support also means you can spend plenty of time sketching out designs or writing up notes, meaning you feel far more in control of what you’re doing.