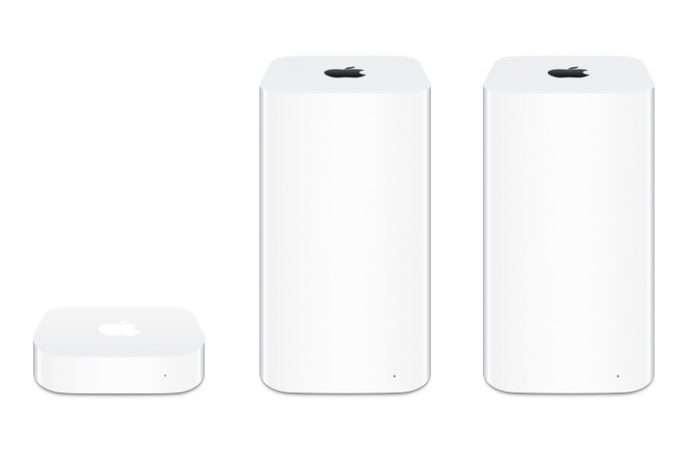 Apple earlier this year sent a “Network Adapter” to the FCC for approval, an unearthed filing has revealed, although suggestions that it could be an AirPort successor or other unannounced networking product for consumer use are likely wide of the mark.

Consumer networking products from Apple’s discontinued AirPort range
Whenever a company designs a device for use in the United States that uses radio frequencies like Bluetooth or Wi-Fi, it must get FCC regulatory approval. According to documents shared by the FCC, Apple sent a “Network Adapter” with the model number A2657 to the agency on January 22, with the following description.

A2657 is a network adapter. It has an integral battery, two gigabit ethernet ports, USB-C connector and antenna. The device supports IEEE 802.11b/g/n radio, Bluetooth radio, and NFC. The network adapter comes with 32 GB memory storage and 1.5 GB RAM.

The device is intended to be connected to a host computer and receive its power through a USB-A port during normal use.

The documents suggest that the device runs “19F47” firmware, which matches an early internal version of iOS 15.5, suggesting it is powered by Apple silicon. The FCC tested the device by connecting it to an iMac, but other than that, no other details are given, and Apple has requested a non-disclosure agreement that runs until November 2022.

The filing doesn’t include any images of the device either, but there are some telltale signs in the description that it is unlikely to relate to a forthcoming consumer product.

For one, the device appears to lack support for the 802.11ac wireless networking standard. Also known as Wi-Fi 5, 802.11ac was announced in 2014 and has been superseded by Wi-Fi 6, which is already supported in newer iPhones, iPads, and MacBooks.

Secondly, the device only uses the 2.4GHz Wi-Fi band, whereas most modern commercial routers and consumer Apple devices support both 2.4GHz and 5GHz bands, with the 5GHz spectrum usually offering the best performance. For example, the discontinued sixth-generation AirPort Extreme base station operated on both 2.4GHz and 5GHz radio bands.

Lastly, the device is “intended to receive its power through a USB-A port during normal use.” Apple has replaced USB-A with USB-C connectivity on all of its MacBooks and iMacs, and the idea that it would launch a consumer device with a legacy port as a primary connector is unrealistic.

Apple officially ended development on its AirPort line of products in 2018, and the company has since sold third-party routers. Apple has many FCC-certified devices that are solely intended for internal use, and this filing very likely relates to another device that falls into that category.

(Via 9to5Mac.)Tag: FCC
This article, “Apple’s Mystery ‘Network Adapter’ Found in FCC Filing Likely for Internal Use Only” first appeared on MacRumors.com