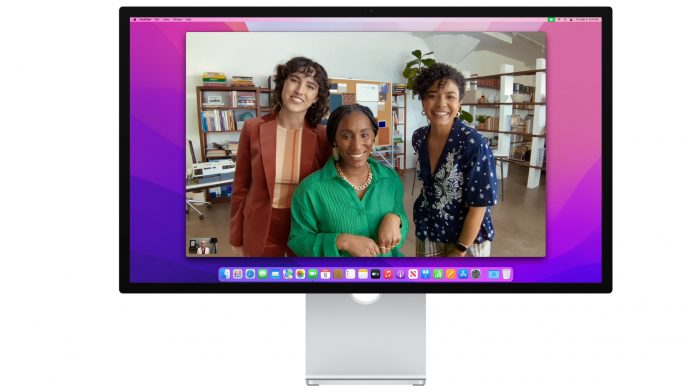 Apple today released a new 15.5 firmware for the Studio Display, with the update coming after a few weeks of beta testing. The Studio Display Firmware improves the performance of the webcam.

The Studio Display firmware can be updated by connecting it to a Mac running macOS Monterey 12.4, which was also released today. After installing the new Mac software, Studio Display owners can go to System Preferences > Software Update to install the firmware.

Apple has been working on a firmware update for the Studio Display since March, to address complaints about the quality of the webcam.

The Studio Display is equipped with a 12-megapixel Ultra Wide camera that supports Center Stage, but Studio Display reviewers and owners discovered that the camera consistently produces grainy, washed-out images, which Apple has said is the result of the system not behaving as expected.

According to Apple’s release notes, the firmware refines camera tuning, offering improved noise reduction, contrast, and framing. We tested out the firmware update when it was in beta, and there is a clear difference in camera quality, mostly as it pertains to the way the framing works.

In addition to better framing, colors are not quite as pale, the contrast has been improved, and the overall look is more vibrant. Skin tones are also better than before, and there is less de-noising for more clarity, but ultimately Studio Display owners should not expect dramatic changes.Related Roundups: Apple Pro Display XDR, Apple Studio DisplayRelated Forum: Mac Accessories
This article, “Apple Releases Studio Display Firmware 15.5 With Webcam Update” first appeared on MacRumors.com