HomeNewsAndroid 13 is all about big screens, privacy, and payments
News 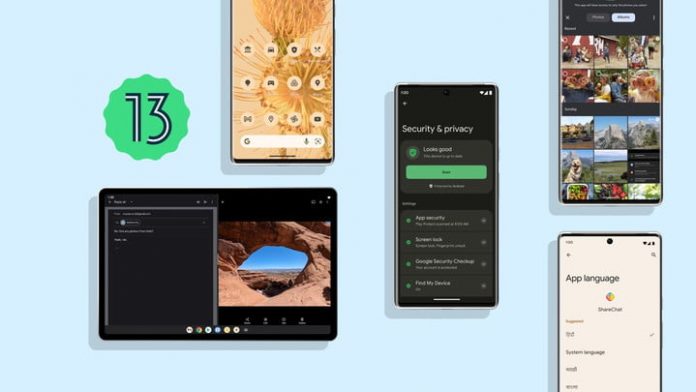 Google announced Android 13, its next big software update, today at I/O 2022. Unlike Android 12L’s low-key release earlier this year, this one comes with something for everyone — phone, watch, and tablet users alike. As with Android 12 before it, Google is continuing its focus on privacy and security, while adding more customization options to its Material You theming system.

To start with, Material You is once again taking the lead here, with Google highlighting enhanced customizability. You’ll see a lot more color options than before when theming your phone, and Google says that more apps will be able to take advantage of Material You’s themed icons feature.

Google will also ramp up Android 12’s privacy, including requiring apps to ask for permission before sending out notifications, automatically wiping clipboard history, and including a new Security and Privacy page that lets you see how safe your phone is at a glance.

Android 13 is also getting a lot better for larger-screen devices. Google started this work with Android 12L, and it’s continuing it with Android 13. There’s now built-in drag-and-drop support for select apps, a more flexible taskbar, and an intuitive split-screen by way of app pairs. Google is also taking care of its app problem, updating more than 20 of its Google apps to support larger screens. Apps from Facebook, TikTok, Canva, and more are expected to follow over the coming months,

Google also introduced the new Google Wallet, an upgrade to the Google Pay app that makes it a lot more like Apple Wallet, adding support for driver licenses, student IDs, and much more. It’s good to see Google pick it up and upgrade its currently lackluster Pay app. The company says this new app would be coming to Android devices around the world in the coming weeks.

With mobile operating systems being as mature as they are now, it’s not a very huge update. A lot of it simply builds on and evolves what Google already started working on with Android 12. It’s not exciting or sexy, but it’s necessary.

Android 13 will roll out this summer first to Google’s Pixels. Brands like OnePlus, Realme, and Oppo are already working on testing the developer preview. A new Android 13 Beta will roll out later today.