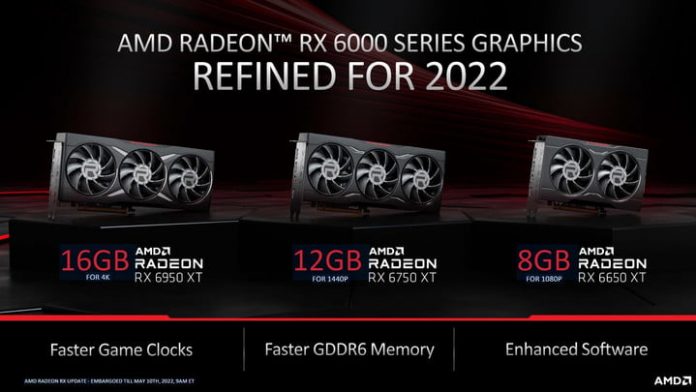 AMD is refreshing its RX 6000 series lineup with three new graphics cards. Based on existing models, the new cards boost memory bandwidth and clock speed to deliver a 5% to 6% increase over the base models, according to AMD.

Although the new versions come with boosted clock speeds, the boost isn’t that significant. The RX 6950 XT leads with a 4.4% bump, while the RX 6600 XT trails with a measly 2.1% increase. Those gains aren’t what we hoped for, as Nvidia was able to boost the RTX 3090 Ti’s clock speed by nearly 10% over the base RTX 3090.

Similar to Nvidia’s most recent release, though, the refresh RX 6000 graphics cards come with slightly faster memory, boosting their overall bandwidth. Short of the RX 6600 XT, AMD’s RDNA 2-based GPUs haven’t had an issue with bandwidth in the past. And according to AMD’s own numbers, the new cards perform similarly to the old.

The RX 6950 XT lead in Borderlands 3 and F1 2021, for example, though it fell short of the RTX 3090 Ti. In Far Cry 6 and Assassin’s Creed Valhalla, however, AMD’s new card even beat the RTX 3090 Ti. That was likely on the back of AMD’s Smart Access Memory, which was enabled during the tests.

That’s not the case for the RX 6750 XT, which only showed clear leads in Doom Eternal and F1 2021. This card, according to AMD’s benchmarks, underperforms compared to the RTX 3070 in a number of titles, including Forza Horizon 5 and Fortnite.

Although AMD’s newest cards are priced higher at list and don’t universally outperform their competitors, AMD is stressing its power advantage. The RX 6950 XT consumes 335W of power, for instance, while Nvidia’s flagship RTX 3090 Ti draws a massive 450W.

The cards are available to purchase now, either in the Midnight Black versions directly from AMD, or from several board partners. AMD says models are available from Gigabyte, ASRock, MSI, Asus, Sapphire, and XFX, among others.

Along with the new cards comes an update to Radeon Software. The big addition is Radeon Super Resolution, which allows you to use AMD’s FidelityFX Super Resolution upscaling technology with any game, as long as you have a supported GPU.