HomeNewsAMD vs. Nvidia at Computex 2022: Where were all the GPUs?
News

AMD vs. Nvidia at Computex 2022: Where were all the GPUs? 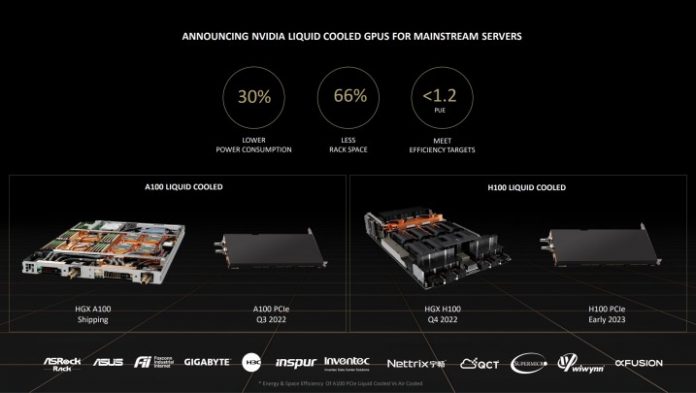 Computex 2022 might be in full swing, but if you were hoping for exciting news from the two big graphics card manufacturers, then the show’s already over. AMD’s keynote contained tantalizing teases of next-generation processors and a few laptop showcases, while Nvidia’s focused on AI developments and datacenter graphics cooling.

For two companies that are supposed to be launching their next-generation cards in the next few months, there was a surprising dearth of GPU news that made the whole event feel a little underwhelming.

Nvidia: GPUs for me but not for thee

Maybe it’s unfair to say that Nvidia didn’t have any graphics card news at Computex, it’s just that it was almost completely irrelevant for gamers and PC enthusiasts. It debuted new CPU and GPU hardware for the data center, which isn’t overlty exciting for home gamers, although it should enable much greater game performance for game streaming, which Nvidia is banking on heavily with its GeForce Now platform.

It’s also adding water cooling to some of these cards, helping to improve energy efficiency in GPU-heavy servers. With data centers accounting for around 1% of global electricity usage, and half of that going on cooling, this could have a sizeable environmental impact.

There was a lot of talk of AI developments, which Nvidia has been pouring billions of dollars into in recent years, providing the underlying hardware and software for self-driving cars, and various simulations. Its only real nod to gaming at all was a few extra games adding DLSS and ray tracing support, and a new 500Hz gaming monitor from Asus.

As has been clear for a few years now, Nvidia is increasingly looking at its gaming business as a side hustle to its burgeoning AI empire, an industry in which it looks poised to be a major player for many years to come. When RTX 4000 cards drop in a few months, they’ll no doubt be impressive, performative, and probably more power-hungry than ever, but even then it may feel like an aging industry that Nvidia is happy to coast in. Especially since it’s made a killing on the global silicon shortage and price hiking in recent years.

AMD: Onboard graphics, anyone?

As if it had a gentleman’s agreement not to talk GPUs while Nvidia had nothing to show, AMD went hard on its next-generation Zen 4 processors at Computex 2022. Ryzen 7000 is set to raise clock speeds, cache counts, and FPS in turn, likely delivering the fastest gaming processors the world has ever seen. At least until Raptor Lake gives it some added competition this Fall.

AMD also showed off a few new laptops which look gorgeous and, thanks to AMD’s ongoing “Smart” technology developments, will be able to fully leverage their AMD CPU and GPU combinations to make for impressive performance — when they launch, later this year. It’s great and all, but these are some of the same laptops that we were excited about at CES 2022 almost six months ago and we’re still waiting on a number of these designs to become widely available.

The only real graphics news from team red at this show was the inclusion of RDNA2 graphics cores on all of its upcoming processors. Considering AMD has restricted that to its mobile chips and underperforming desktop APUs in the past, this is welcome news, especially since RDNA2 integrated graphics has proved so impressive on Xbox and PlayStation consoles, as well as the new Steam deck.

But RDNA 3 is supposed to be mere months away from launching, and there wasn’t even a whisper. Nor even a victory lap for the recently unveiled Radeon 6X50 cards which have proved relatively effective, especially now that costs are finally coming down on GPUs across the board.

With Nvidia having almost nothing of interest for PC gamers, this seems like a missed opportunity to steal the hearts, minds, and headlines of every gamer and journalist waiting on new GPU news at one of the year’s major shows. It seems like we’ll need to wait a little longer to learn what AMD has planned for RDNA3, but the lack of even a hint of the future does raise questions about when we can expect AMD’s long-awaited next assault on Nvidia’s GPU dominance to materialize.

Does this mean delays?

The question that arises from the ashes of an uneventful Computex 2022 is a big one: If Nvidia and AMD aren’t ready to talk about their new graphics cards yet, how can they be almost ready to launch them? For well over a year the narrative has been that we could expect RDNA3 and  RTX 4000 cards to debut sometime in the latter half of 2022, and that may still happen, but the complete wasteland of debuts, showcases, or even hints at anything new generation at Computex puts to bed the idea of an Nvidia launch in July.

With AMD only just having launched its refreshed RDNA2 GPUs, it’s possible that it didn’t want to overshadow its recent launch with a peek over the horizon, but it’s also possible that we might be looking at a close of 2022 release for RDNA3, potentially bleeding into an early 2023 full launch.

Rumors for the next-gen cards from AMD and Nvidia have been rampant over the past few months, ranging from very positive, to the downright depressing, which may be an indication that both camps are trying to get ahead of the leakers by releasing a lot of phony information. Keeping quiet at Computex may be part of that plan.

Unfortunately, that leaves us guessing too, so for now we’ll just have to bathe in the excitement of upcoming processors and keep our eyes peeled for more information making its way to us in the months to come.

How much GPU memory do I need?

How to use Discord spoiler tags

How to use Discord spoiler tags

AMD vs. Nvidia at Computex 2022: Where were all the GPUs?