All the new Chromebook features quietly announced at Google I/O 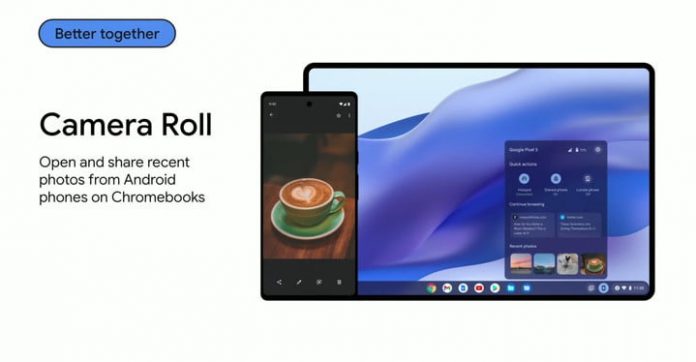 At the annual Google I/O developer conference, Google announced several new features coming to Chrome OS later this year. The majority are designed to bring Android phones and Chromebooks closer together with cross-device synergies like communication and app streaming.

As discussed in a 23-minute-long breakout session video, one of the top talked-about features coming to Chrome OS soon is Camera Roll. With this one, you can open and share recent photos from your Android phone on your Chromebook. It will be coming “later this year” and will live in the Chrome OS Phone Hub. From there, you can simply drag and drop the listed photos as needed.

The other big Chrome OS feature Google discussed is communication and app streaming. Coming “later this year,” this is a new way to access messaging and other communication apps from an Android 13 phone on all Chromebooks without reinstalling the app on a Chromebook.

When describing the feature, Google said that if you’re writing an email on your Chromebook, you’ll be able to respond to messages by opening your phone chat app on your device. Your Chromebook will mirror that app, in an open window from Phone Hub, and show you the content exactly as you have it on your phone.

Capping out the list of major features is one known as Fast Pair. As the name suggests, it is designed so your Chromebook can seamlessly discover and connect to compatible headsets, headphones, and earbuds with one tap. Google believes this feature can help you avoid losing audio and avoid going through additional setup when moving between different audio devices.

As for app developers, Google is working on a new app discovery service. This has three goals: Elevated app discovery, consistent app experiences, and stable app fidelity. For you, this means finding apps more easily through curated collections, including Linux, Android, and traditional web apps. The app discovery service will be powered by machine learning and will be tailored to factors like user preferences, type of device, form factors, and computing power, according to Chrome Unboxed.

Google’s developer video also dives into some interesting Chromebook stats, with Google claiming that Chromebooks are the number one device in K-12 education. Other stats revealed that there were 20% more monthly active Chromebook enterprise users than in 2021. There are also more than 75 new Chromebook models planned for release in 2022, per Google’s data.

All the new Chromebook features quietly announced at Google I/O