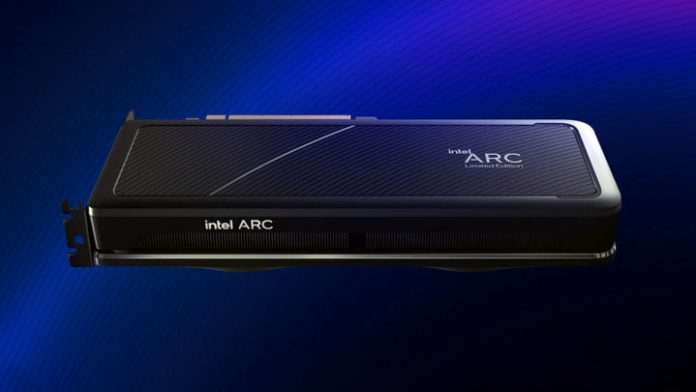 Contrary to rumors suggesting otherwise, it seems that Intel’s Arc Alchemist GPU desktop series could arrive as soon as the end of May.

Wffctech’s sources in Taiwan have said that Team Blue has seemingly accelerated its launch plans for the desktop range of its Arc boards by recently reaching out to supply chain partners.

The A750 variant is reportedly scheduled for a release either at the end of May or sometime during the opening stages of June. That same timeline was also mentioned for the A580 model.

As for the A750 GPU, this version is said to come with a manufacturer’s suggested retail price (MSRP) of $350, while the A580 will apparently be available for $280.

Intel’s Arc Alchemist A750 is expected to be one of the company’s mid-range boards from the A-series. Wccftech says it will offer similar performance levels to Nvidia’s popular Geforce RTX 3060.

Furthermore, Intel has seemingly notified partners that drivers are still progressing, which should be followed up with additional enhancements after the GPU’s launch. In terms of a price comparison to the RTX 3060, Nvidia’s gaming card has a recommended retail price tag of $330. However, it’s being sold at a price range of between $479 and $599 on Newegg.

Elsewhere, Wccftech also received information pertaining to the A580 video card, which is believed to be aimed at the budget/entry segment of the market. The RTX 3050 is the card that was mentioned as its closest comparison when it comes to performance. The MSRP for Nvidia’s product, meanwhile, is $250.

Although GPU prices are returning to normal, this particular RTX 30-series board is listed for $329 on Newegg.

Could Intel gain some momentum in the GPU market?

Intel may have found a gap in the market it can target in order to lure potential customers away from its rivals’ GPUs if the $350 and $280 price tags prove to become a reality.

Due to the current situation in the GPU market, prices below $200 for any GPU are still a rarity. Even so, another GPU that was discussed in the report, the A380, will reportedly launch with a $150 price tag. The card is said to be comparable to Nvidia’s GTX 1650, which sports an MSRP of $150, although current costs are slightly inflated (around $220) on Newegg.

Lending credence to the aforementioned report is a previous rumor indicating that Intel was indeed planning to bring sub-$200 graphics cards to the GPU industry.

Intel could confirm all these Arc desktop GPUs at the upcoming Computex trade show, according to Tom’s Hardware.

Computex 2022 will commence on May 24, so it does make sense that the company might wait to introduce the A750, A580, and A380 at that event as opposed to a more regular, press release-based unveiling.

In terms of Arc Alchemist’s laptop GPUs, they have finally started to become available in major markets like the U.S., but the first systems equipped with the mobile variants of the GPU will be fairly expensive.

Facebook
Twitter
Pinterest
WhatsApp
Previous articleThis Lenovo ThinkPad X1 Carbon laptop is $1,429 off today (seriously)
Next articleThe iPad Mini is at its lowest price of 2022 — but for how long?
- Advertisment -