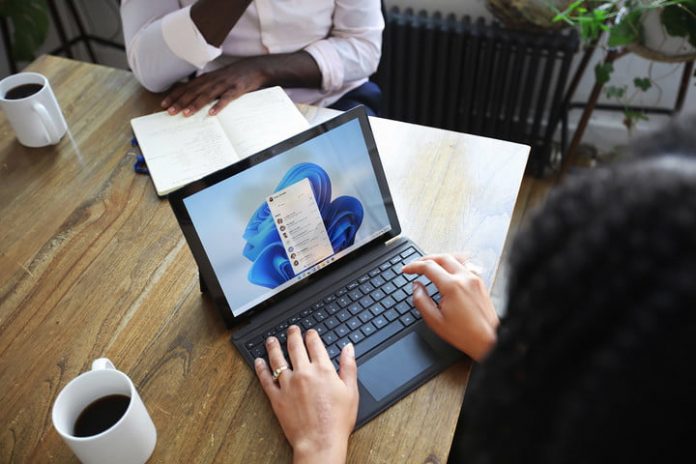 Coming soon to Windows 11 are some features powered by A.I. that can help make you better connected with the folks on the other end of your Teams calls. Also in the works are added security features, to protect against malware and phishing.

Announced by Panos Panay, the first set of features includes voice clarity, automatic framing, portrait background blur, and eye contact for meetings on Windows 11. Some features might be hardware-dependent, and Panay didn’t get into the specifics or give a release date. He instead mentioned that “we want to make that [meeting] experience feel more personal and more human.”

Microsoft previously partnered with Qualcomm on some of these same technologies. The new  Snapdragon 8cx Gen 3 ARM-based chip has features in the integrated GPU that can support faster camera start-up time, support for auto-focus, auto white balance, and noise cancellation. The Lenovo ThinkPad X13s has these features built-in, including A.I.-based auto framing, intelligent noise impression, and the ability to mute out background noises on both ends of the calls.

These A.I.-powered meeting features promised for Windows 11 pair up with two new security enhancements. In these areas, Windows 11 is getting better protection against phishing and targeted malware.

“We’re continuing on our Windows journey to empower IT to continuously raise the bar against attack patterns from the chip to the cloud,” explained Panay.

With the phishing protection, Microsoft Defender SmartScreen can identity and alert you when you’re putting your Microsoft information into a malicious application or a hacked website. In a separate post announcing the feature, David Weston, VP, Enterprise & OS Security at Microsoft, suggested that this makes Windows the world’s first operating system with phishing safeguards built-in, and shipped out of the box to help users stay productive and secure.

The malware protection, meanwhile, comes with Smart App Control, which was previously tested with Dev Channel Windows Insiders. This feature uses code signing alongside A.I. models to ensure that only trusted applications are running on your PC. The feature will come shipped on new Windows 11 installs only, and devices running previous versions of Windows 11 will have to be reset to get it.

Other security features coming to Windows 11 include Hypervisor-Protected Code Integrity (HVCI) being turned on by default on more Windows 11 devices. This can ensure that attackers can’t inject their own code with drivers and ensure all drivers being loaded are trustworthy.

Alongside all this, Microsoft is also announcing updates for its Windows 365 service, which allows enterprises and businesses to access PCs from the cloud. It’s now coming closer to Windows 11. Windows 365 boot will let users log into a Cloud PC at the startup of a Windows 11 PC, and Windows 365 Switch will let users move between Cloud PCs and desktop spaces with the Windows 11 Task switcher. A Windows 365 app is also in the work for Windows as well as Windows 365 Offline, which enables work in Windows 365 when disconnected.

You can learn more about these features, and more updates for Microsoft Endpoint manager, at Microsoft’s dedicated Windows powers the future of Hybrid Work website.