HomeNewsWhat is going on with the Galaxy S20’s screen?
News

What is going on with the Galaxy S20’s screen? 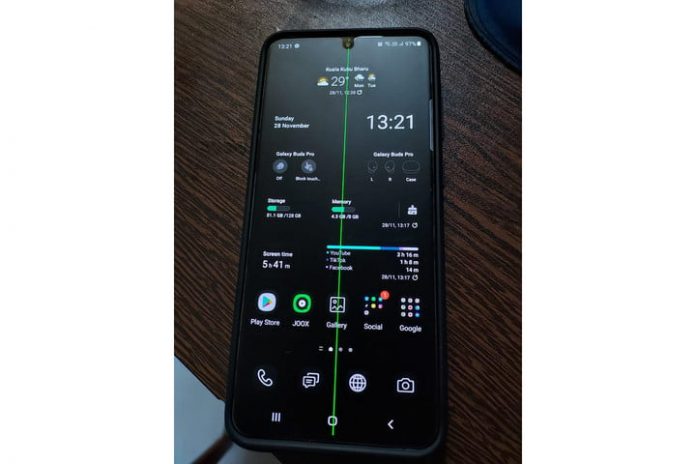 Some owners of the two-year-old Samsung Galaxy S20 have been complaining about the screen showing random green lines, and have linked the problem with a recent software update. Online discussion platforms, including Samsung Community and Reddit, are packed with complaints about the issue, which is affecting the Galaxy S20 and the Galaxy S20 Plus.

While this may first appear to be a hardware defect, many are claiming their smartphones did not suffer any damaging impact or from being drenched in liquid. Judging by the images, the displays on the phones are intact, without any signs of obvious physical damage. What has caused it? Curiously, there seems to be a common denominator in most of the cases, as apparently the line appeared right after the November 2021 Google security patch was installed.

Others also claim the line tends to disappear with continuous usage but reemerges after a while. The line has changed colors for some others, from green to white and pink. Because the issue may have surfaced following a software update, some have tried wiping the cache on their Galaxy S20 devices or resetting them to the factory condition, but to no avail.

With no easy solution, the next course of action for some is to get the screen replaced, but because the devices are no longer under warranty the cost is reportedly upwards of $200. Samsung has so far not commented, leaving affected owners not wanting to put money into an aging phone to continue having to use it without getting the screen replaced.

But at the same time, some seem to have gotten lucky and received a free upgrade from Samsung. Redditor u/Acomplished_Baby285 claims the display on their Galaxy S20 Plus was replaced free of cost at a service center in the Philippines.

This isn’t the first time Galaxy S20 users have had issues with their displays. In 2021, several owners reported seeing a green tint on the display, which in some cases progressively increased and rendered the devices completely useless.

The increasing price of high-end smartphones and longer periods of software support means we are upgrading our phones less frequently, making concerns over the longevity of a flagship smartphone like the Galaxy S20 disconcerting.

Whether this is a manufacturing defect, a hardware fault, or an odd software bug isn’t clear yet. One Samsung Community member claims a Samsung representative informed them this is a factory defect. But this has not been officially confirmed and no recall or replacement program is in place. In the meantime, if you are facing this issue, you may find it easier — and lighter on your pocket — to get the Galaxy S20 repaired by a third-party vendor or to do it yourself.