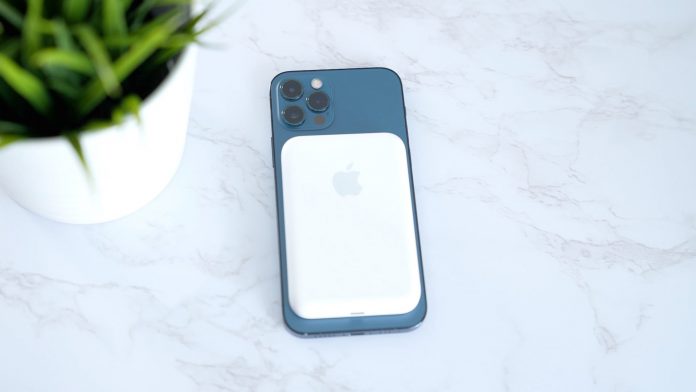 Apple yesterday released a firmware update designed for the MagSafe Battery Pack, and it turns out the new firmware enables 7.5W charging while on the go, up from the previous 5W limit.

In an support document, Apple says that ‌MagSafe Battery Pack‌ owners can update their firmware to the new 2.7.b.0 release to get the faster 7.5W charging capabilities.

Updating the ‌MagSafe Battery Pack‌ can be done by attaching it to an iPhone and waiting (a process that can take up to a week), or using a Mac or an iPad to update within five minutes. Apple suggests users attach a Lightning cable to a ‌MagSafe Battery Pack‌ and then plug in the USB side to an ‌iPad‌ or Mac to initiate the update process.

As of now, those who install the firmware update can charge their compatible iPhone 12 and iPhone 13 models at a faster 7.5W rate. It’s still not as quick as the 15W ‌MagSafe‌ charging, but it is equivalent to the fastest available Qi charging speeds on the ‌iPhone‌.Tag: MagSafe Battery Pack
This article, “MagSafe Battery Pack Now Able to Charge at Faster 7.5W Speed After Firmware Update” first appeared on MacRumors.com