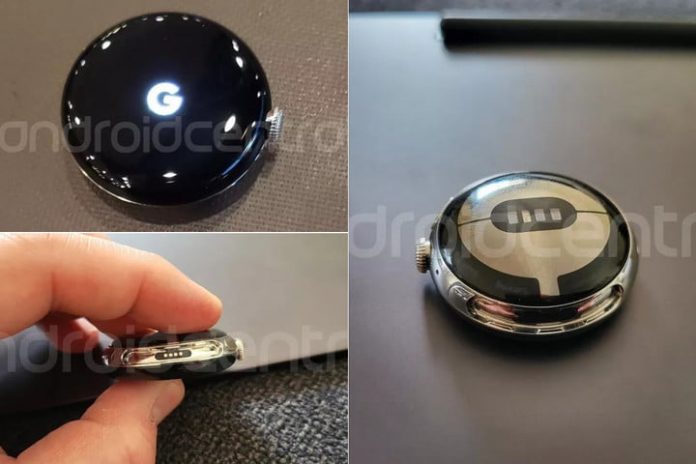 In 2010, an engineering prototype of the iPhone 4 was left at a bar by an Apple engineer, giving the world a glimpse of the phone months ahead of its official debut. Now, a test unit of Google’s upcoming Pixel Watch was reportedly left at a restaurant, and we now have what appears to be our first detailed look at the smartwatch from various angles.

So far, the barrage of leak-based renders has painted the picture of a round dial with a curved periphery. The new set of real-life images, which come courtesy of Android Central, shows a screen that is dramatically curved and imitates the “waterfall” curved screen aesthetics that smartphone makers like Vivo were chasing a few years ago.

But given the massive glass curvature, Google just might use the curved edges for flashing notification lights without interrupting the on-screen content. Relatedly, another leaked image that appeared last week revealed the Pixel Watch’s home screen with some sort of Fitbit (which Google owns) integration clearly visible.

It looks like the case is metallic with a glossy finish, and the sensor array is neatly arranged in a rectangular bar at the center. The rotating crown also rocks a metallic finish. There allegedly are two physical buttons on the Pixel Watch’s main body — one on either side of the crown. It is unclear if these buttons are for interacting with the user interface or for health-related features.

The Pixel Watch in question was apparently devoid of functional software as pressing the buttons reportedly flashed only the boot screen with a ‘G’ logo. The unit, which could be “a testing model for the Internal Pixel team,” also relies on proprietary connection points for attaching a strap, just like the Apple Watch. That means buyers won’t be able to just buy any standard 22mm strap for the Pixel Watch to match their style. The leaked live images show only a blue strap that appears to be rubberized silicone, but more color options will likely be on the table.

Currently in development under the codename Rohan, Google’s first smartwatch reportedly will rely on a custom chip that shares its DNA with Samsung’s Exynos family and will support cellular connectivity, too. However, there is no word regarding size and case material options.

The possible side of the Pixel Watch, along with strap, as leaked to Android Central.

The box in which the Pixel Watch was found states that the unit is for “internal testing and development only” and that it might not be the final design for the retail package. However, it’s curious that someone (read: Google employee or contractor) would carry the packaging box publicly while secretly testing a highly-anticipated product.

Rumors suggest that the Pixel Watch will offer a supercharged version of Google Assistant, and that means faster response times and some exclusive features, just like the Pixel smartphones. Whether it will bundle advanced health-centric capabilities such as electrocardiogram facility and blood oxygen-saturation level measurement remains to be seen.

Google hasn’t said a word about the Pixel Watch yet, but rumors suggest that it might debut at the upcoming I/O event in May alongside the Pixel 6a. However, if Google decides to launch it alongside the Pixel 7 series phones, we might have to wait until 2022’s fourth quarter to find out what Google has to offer with its first smartwatch.

Until then, watch this leak with skeptical (albeit curious) lenses.

Perfect for school, this Lenovo 2-in-1 laptop is a steal at 31% off