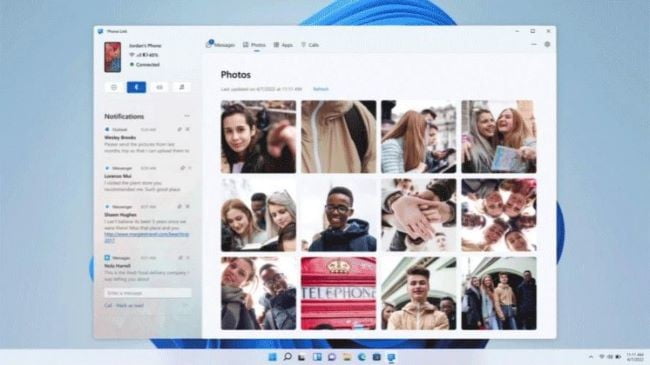 Microsoft has announced a rebranding of its Your Phone app to the name Phone Link, alongside the latest Windows 11 update.

With the new name comes a redesign of the Phone Link app, with new controls, colors, icons, and illustrations to go along with the Windows 11 update.

Microsoft has also introduced a new setup method, which allows users to scan a QR code from their phones to pair the feature. The Android companion app has also been renamed Link to Windows, which can still be downloaded in the Google Play Store. Both the Windows 11 and Android apps will have the same icon for easy identification.

First introduced over three years ago, Your Phone has been an option for accessing your phone’s functions directly from your computer. First, it was limited to just photos and texts, but later came notifications, phone calls, and other app integrations.

The partnership started with Microsoft’s own Surface Duo phone but more recently has extended to the most popular Android company, Samsung. Samsung announced its partnership to bring the feature to the Galaxy S22 series in February. As part of that collaboration, Samsung models including the Galaxy Z Fold, Galaxy Z Flip, Galaxy S series, and the Galaxy Note series are also compatible with Your Phone, now known as Phone Link.

The Phone Link rebrand is just one spotlighted feature Microsoft has confirmed ahead of its April 5 event, which is expected to showcase more new developments in Windows 11 in addition to more of the brand’s software. The event is expected to have a productivity focus, with word that Microsoft will likely discuss updates to its Microsoft Edge browser, Microsoft Teams, as well as other Microsoft 365 applications.