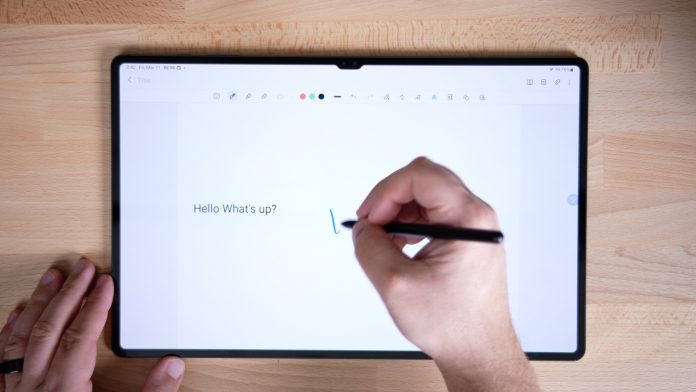 Samsung in February unveiled the Galaxy Tab S8 Ultra, a high-end tablet that’s meant to outshine the iPad Pro with its 14.6-inch OLED display. In our latest YouTube video, we went hands-on with Samsung’s Galaxy Tab S8 Ultra to see if the company has indeed created something that’s better than the 12.9-inch ‌iPad Pro‌.

Subscribe to the MacRumors YouTube channel for more videos.
Priced starting at $899.99 for 128GB of storage and 8GB RAM, the Galaxy Tab S8 Ultra is more affordable than the $1,099 128GB 12.9-inch ‌iPad Pro‌, even though it’s bigger with its 14.6-inch AMOLED display. Apple’s ‌iPad Pro‌ uses mini-LED technology, and both have the same 120Hz maximum refresh rate. 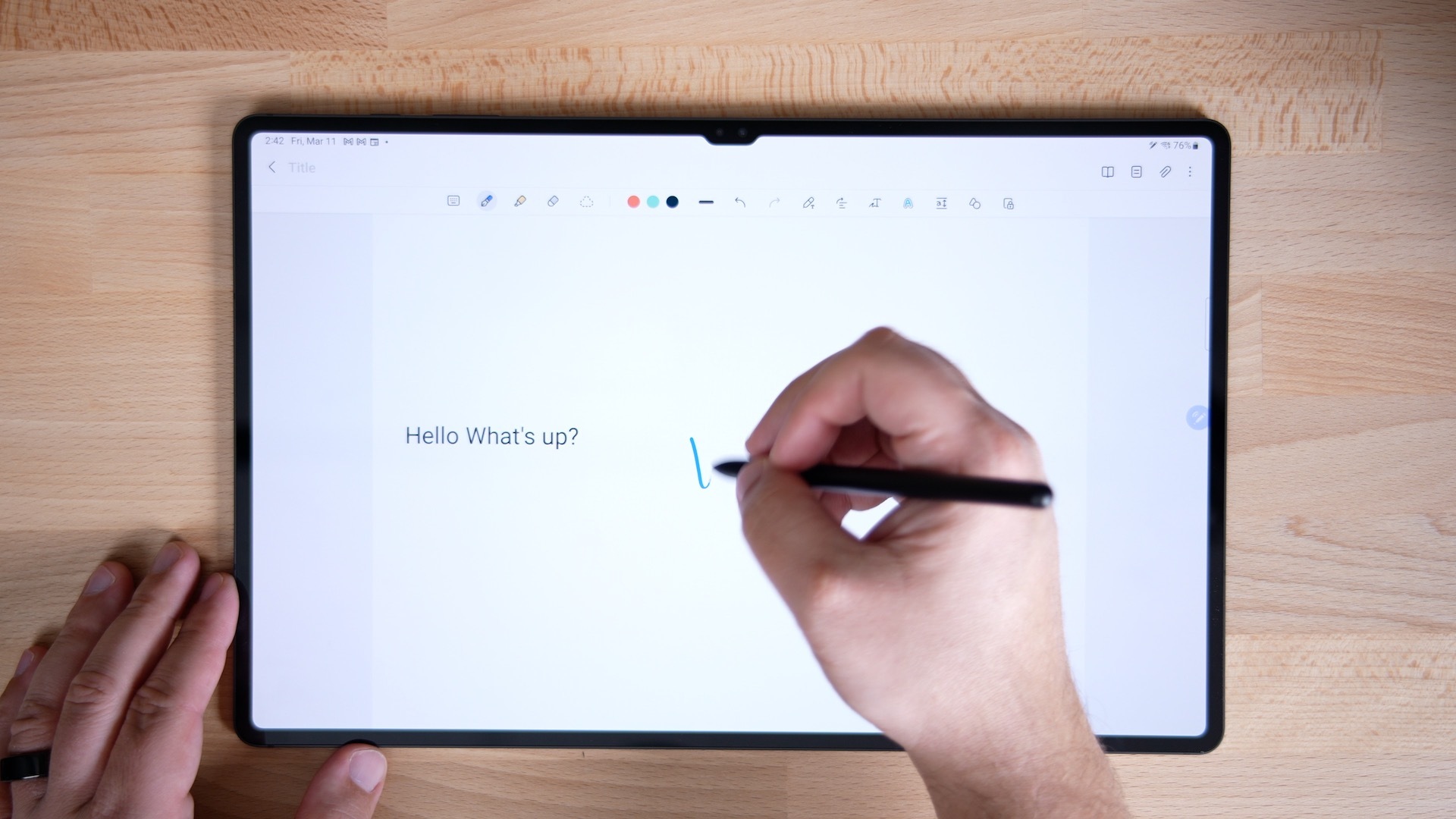 Samsung designed the Galaxy Tab S8 Ultra with slim bezels, but it’s worth noting that there is a notch for the front-facing camera, even though Samsung has previously made fun of Apple for including a notch on some of its devices. Apple’s iPads don’t have a notch at this time, so Samsung is breaking ground on the tablet notch front.

Despite the notch, the Galaxy Tab S8 Ultra’s display is its best selling point, and the OLED panel has an edge over the ‌iPad Pro‌’s mini-LED panel because of blooming, or light leakage that can cause some on-screen elements to have an unwanted glow effect when viewing high contrast content. 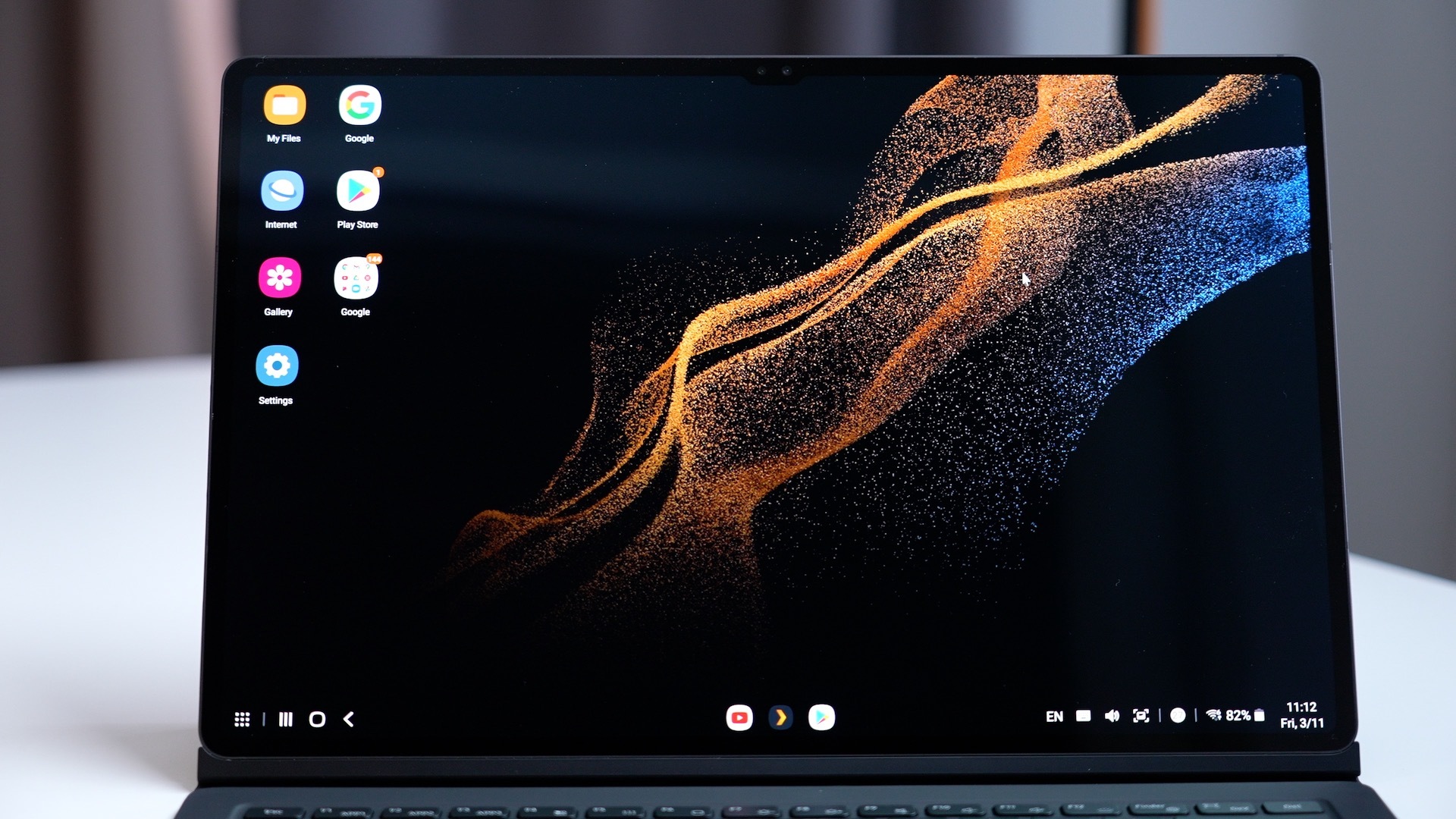 Samsung put the front camera on the Galaxy Tab S8 Ultra in a landscape orientation, which makes sense on a tablet this size as it’s more of a desktop-like experience. The ‌iPad Pro‌ has the cameras positioned for use in portrait orientation, which is awkward on a larger display. 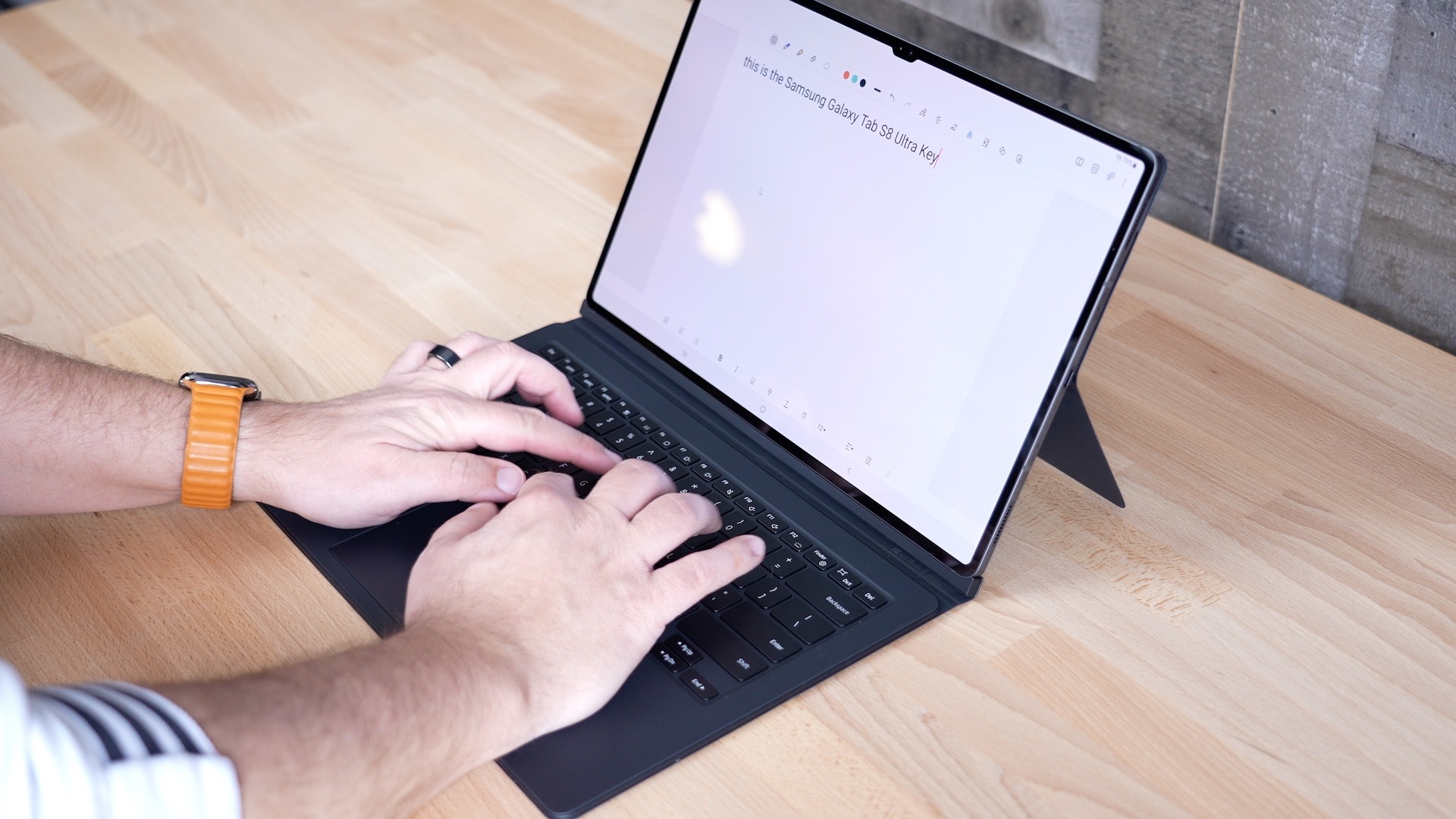 There is a built-in facial recognition system, but Android device makers have not mastered technology equivalent to Face ID, so it’s limited in scope and can’t be used for purchases or password authentication. Instead, there is a fingerprint reader built into the power button, similar to Apple’s iPad Air. 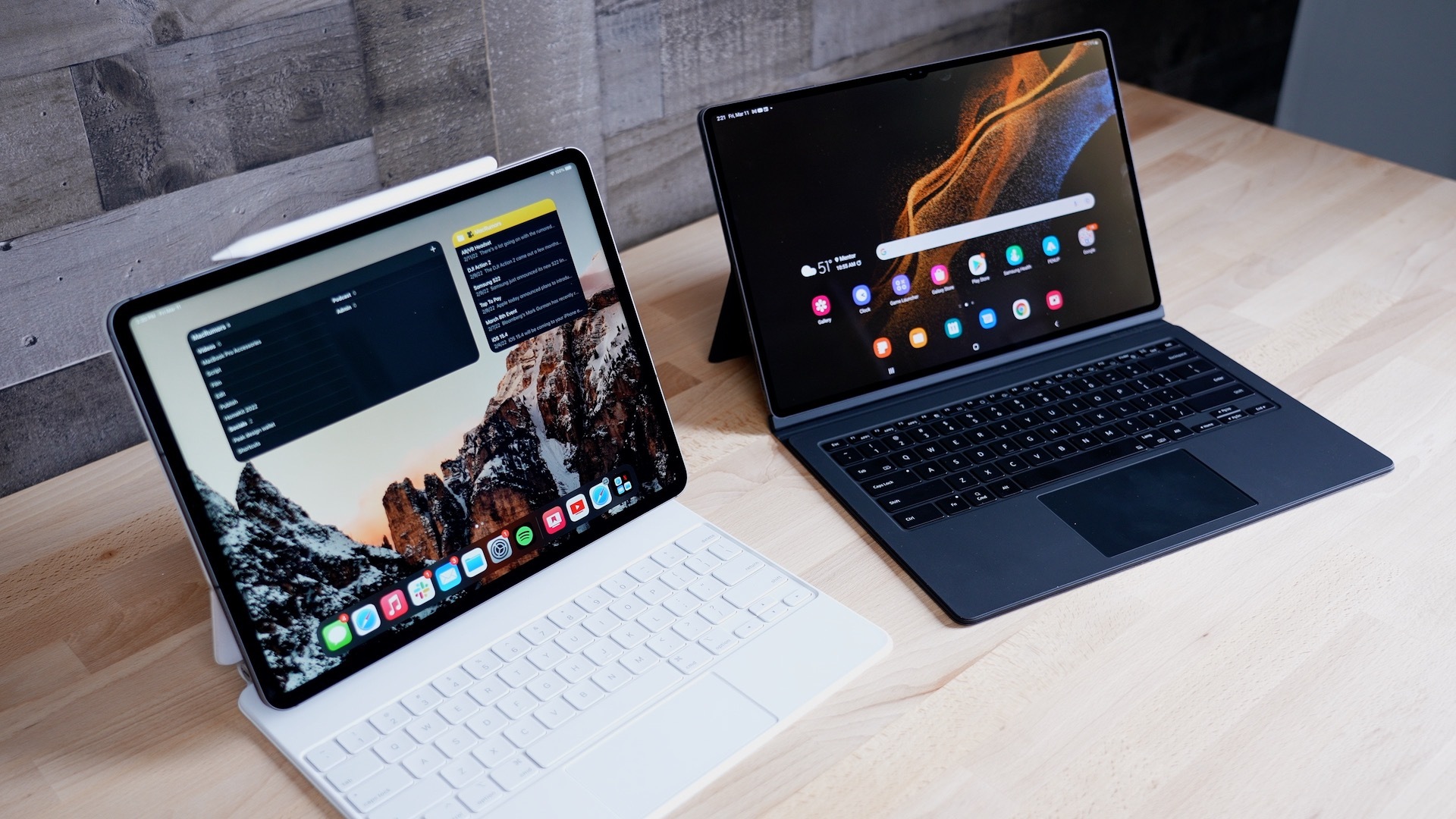 The ‌iPad Pro‌ has the Apple Pencil as an input device, and the Galaxy Tab S8 Ultra has the S-Pen, which is actually included in the box with the tablet so it doesn’t require an extra purchase. The S-Pen is more feature rich than the ‌Apple Pencil‌ with air commands in addition to standard stylus support. Both the ‌Apple Pencil‌ and the S-Pen perform similarly, with minimal lag and the same palm rejection capabilities. 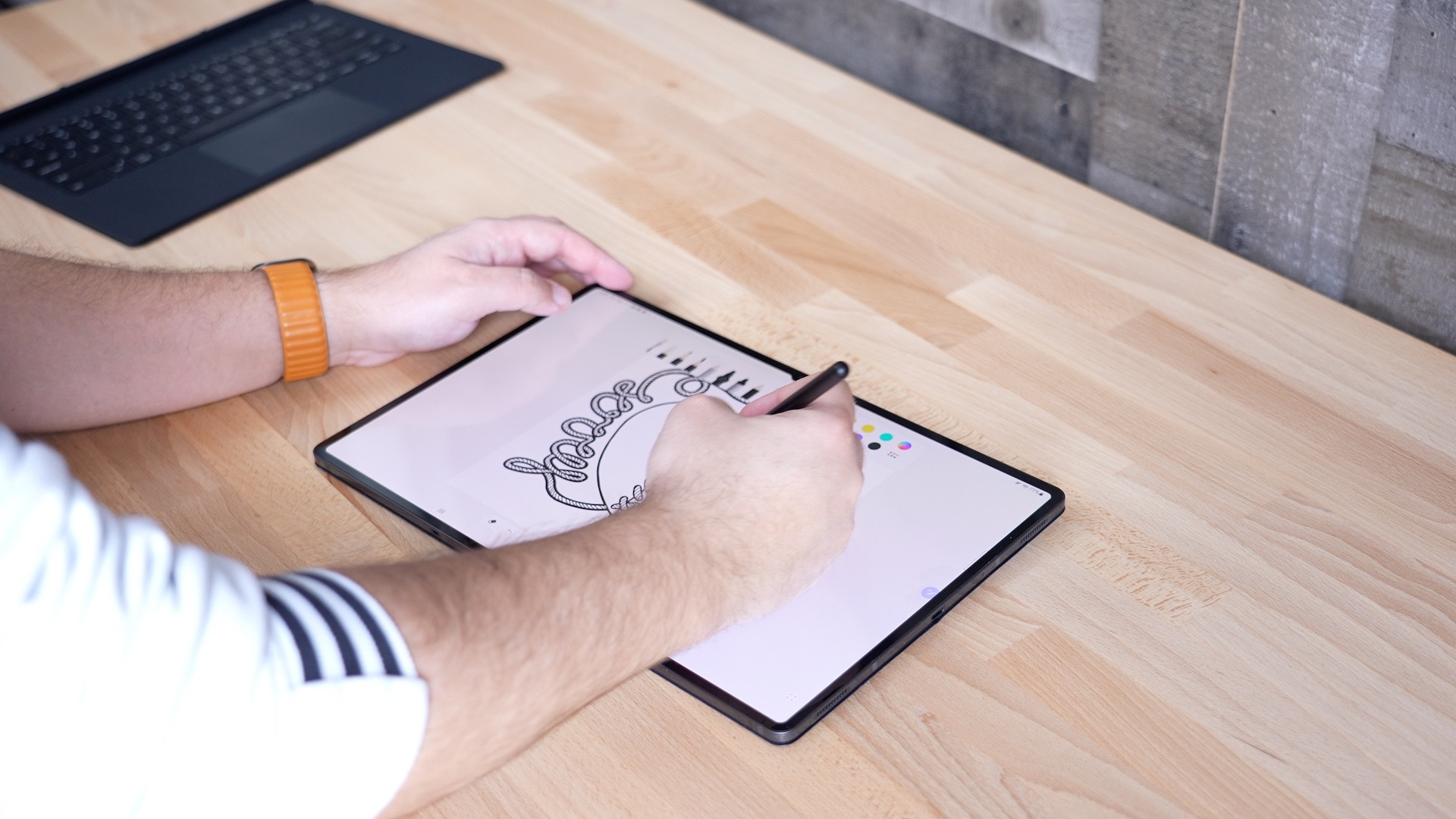 You can get a keyboard with a trackpad for the Galaxy Tab S8 Ultra for an extra $350. The keys are fine, but the trackpad is way behind Apple’s Magic Keyboard in terms of usability. Battery life is similar, but Samsung offers 45W fast charging so it can charge up quicker. 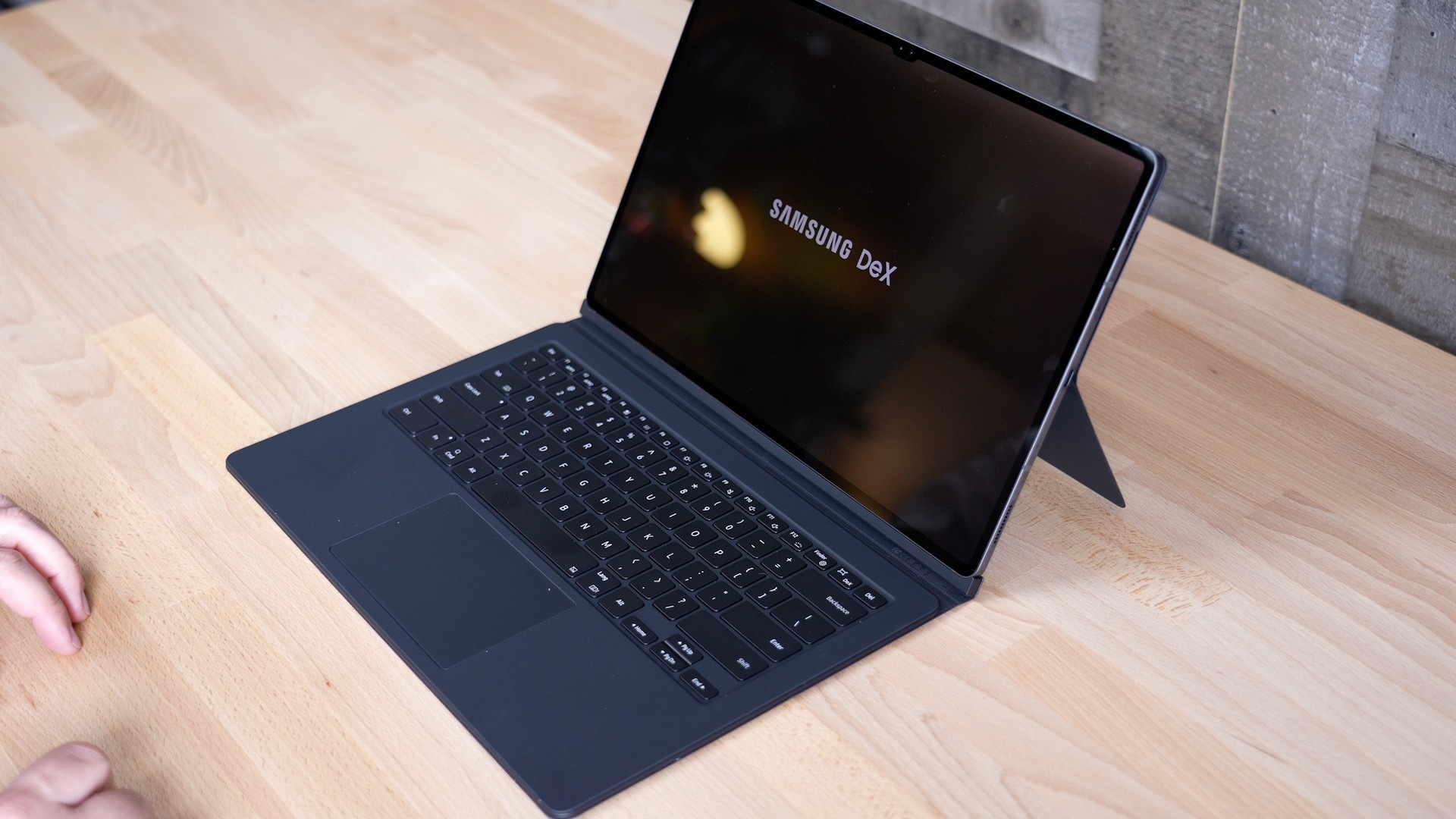 When it comes to hardware, the Galaxy Tab S8 Ultra and 12.9-inch ‌iPad Pro‌ are similar and are both excellent tablets, but software is what sets the two apart. The iPadOS operating system could offer a better desktop experience, but it still outshines Samsung’s Android-based tablet software. Apps don’t always work properly, the scale is off, and there are several other issues.

Samsung did develop DeX for a better desktop multitasking experience, and it’s similar to something like Chrome OS with a dedicated dock, but it’s still not a full computer replacement, much like the ‌iPad Pro‌. As for performance, the M1 chip is significantly faster, and there’s no real competition. 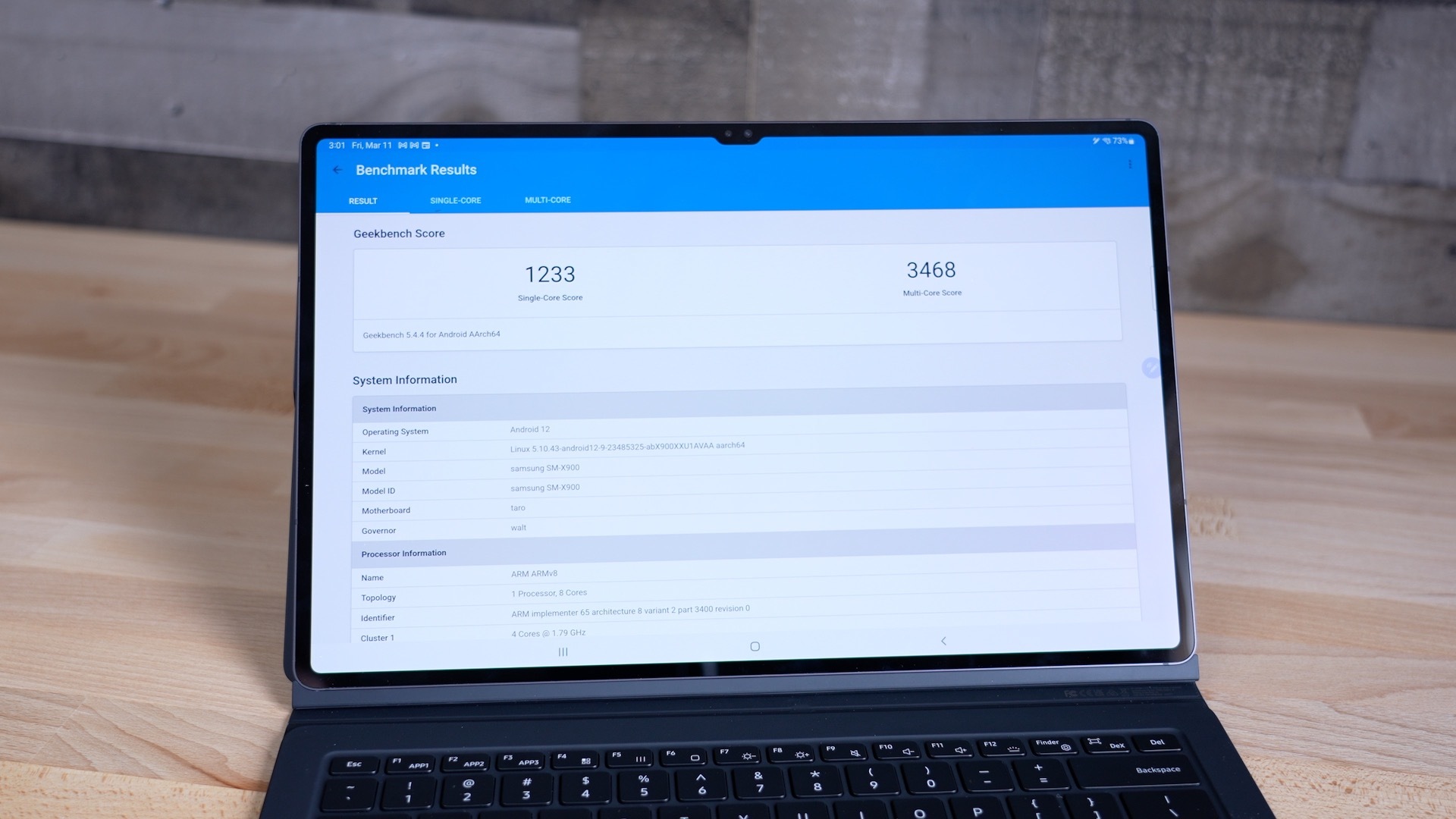 All in all, the ‌iPad Pro‌ wins out because of the software experience and the ‌M1‌ chip’s performance, but ecosystem is an important factor. No dedicated Samsung user is going to want to pick up an iPad, and the same goes for Apple device users who are locked into Apple’s ecosystem.