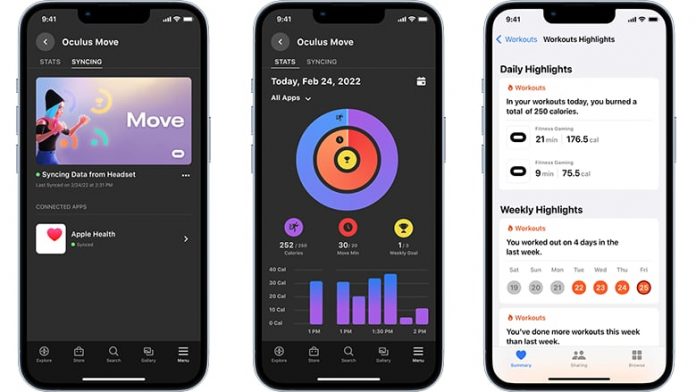 Facebook parent company Meta today announced an upcoming fitness update for the Oculus Quest 2, which will allow fitness data captured during VR workouts to be integrated with the Apple Health app.

Right now, when people exercise with interactive games like Liteboxer, Beat Saber, or Dance Central using the Oculus Quest 2, the data can only be viewed on the Oculus Mobile app on the headset itself, which is not particularly useful for those who like to track their fitness metrics.

Starting in April, fitness data from the Oculus Quest 2 will sync to the Oculus Mobile app on iOS devices or with the Apple Health app. Users will track minutes spent working out and calories burned while wearing the VR headset.

If you have an iOS device, you’ll be able to choose to sync your VR fitness progress with the Apple Health app to automatically track your VR workouts on your iPhone, iPad, or Apple Watch without having to manually input information about your exercise. This means all your exercise stats, including your activities both in and out of VR, can be tracked and available in one place.

Syncing Oculus Quest 2 data to either the Oculus Mobile app or the Apple Health app is opt-in, but choosing to connect to the Oculus Mobile app will see Move stats stored on Meta’s servers. Meta says that Oculus Move stats will not be used to “inform the ads you see on any Meta services.”Tags: Facebook, Meta
This article, “Oculus Quest 2 Movement Data Will Sync With Apple Health App Starting in April” first appeared on MacRumors.com