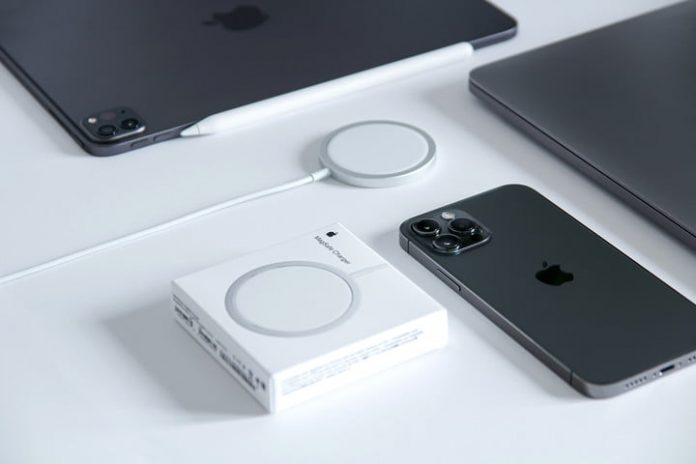 Unfortunately, if you want the best charging experience and speeds possible, things can get a bit complicated. For folks using Apple’s latest iPhone models, that means getting an Apple-certified MagSafe charger.

Apple introduced support for the Qi standard to its iPhone lineup in 2017 with the iPhone 8 and iPhone X. For whatever reason, though, it also limited the maximum Qi charging speeds to 7.5 watts. That meant charging wirelessly was about 50 percent faster than using the included five-watt USB power brick, but it still fell short of the iPhone’s maximum 18-watt wired charging speeds.

This didn’t change until three years later when Apple released the iPhone 12 lineup with its new MagSafe technology. Suddenly, an iPhone 12 could be wirelessly charged at up to 15W — speeds that were at least somewhat comparable with a wired fast-charging adapter.

Unfortunately, this also required a proprietary Apple-certified adapter. When using any other Qi-compatible wireless charger, the iPhone 12 and iPhone 13 still only offer the same 7.5-watt charging speeds as older iPhone models.

To be fair to Apple here, though, just about every smartphone manufacturer that offers higher-speed wireless charging has developed its own standards to get there. Apple’s not unique in this respect, although its use of magnets has also muddied the waters a bit.

Apple’s MagSafe technology isn’t just about charging. The ring of magnets introduced in the back of the iPhone 12 can also be used for attaching everything from stands to wallets. Charging is only one part of that equation, although it’s arguably the most important part.

The catch, however, is that it’s also created some confusion as to how to get the fastest charging speeds. While anybody can stick a ring of magnets in a Qi charger, only one that’s certified by Apple as part of its Made-for-iPhone program can actually deliver the twice-as-fast 15W charging speeds.

This means you have to be careful when shopping for MagSafe chargers. Just because a charger magnetically attaches to the back of your iPhone doesn’t mean it will support the fastest charging speeds. Apple can’t patent the laws of physics, so anybody can make a standard Qi charger that contains magnets, but unless it’s certified by Apple, it will only offer 7.5W charging speeds.

To be clear, you don’t need to care about fast charging in every situation. For example, if you only need something to charge your iPhone overnight, the standard Qi charging speeds will suffice. For topping up wirelessly on the go, however, nothing beats a proper MagSafe charger.

This is precisely where Mophie’s 3-in-1 travel charger with MagSafe comes in. MagSafe-certified chargers are still fairly uncommon, and that’s even more true for those designed for multiple devices. We reviewed one from Belkin just a few weeks ago, but it’s not a travel charger.

Until recently, if you wanted a travel charger for your iPhone and Apple Watch, you had to go with Apple’s own MagSafe Duo. This compact folding charger offers both a 15W MagSafe disc and a place for your Apple Watch. It includes a Lightning to USB-C cable, but you’ll have to supply the power adapter yourself.

Now, Mophie has an alternative solution to give you everything the MagSafe Duo can and more in a much better package.

As the name implies, Mophie’s 3-in-1 travel charger offers spots for charging your iPhone and Apple Watch, plus a third charging pad for another device. It is designed to hold an AirPods or AirPods Pro case, but it’s actually a standard 5W Qi wireless charger that can be used for any Qi-compatible device. It won’t be as fast as a typical stand-alone Qi charger, but it should be enough to charge most smartphones overnight.

To my eyes, Mophie’s travel charger also has a more attractive design than Apple’s MagSafe Duo — or even most of the other travel chargers I’ve encountered.

While the charger looks pretty utilitarian when open, it will typically be covered with your Apple devices anyway. It also folds down to a third of its size for compact travel when not in use, giving it a footprint that’s only slightly larger than the MagSafe Duo, although it’s naturally thicker.

The outside uses a soft heather gray microsuede fabric finish, which is more stylish and feels pleasant to the touch, but what’s even better is that it comes with a matching carrying case that lets you keep the charger and included power adapter and cables together in a single package.

This brings up another important point: Mophie’s travel charger includes the necessary 30W USB-C PD wall adapter. With Apple’s penchant for cutting back on bundled accessories, this is something you’ll need to buy separately with the company’s first-party MagSafe chargers — or even the iPhone itself.

If there is one complaint I have about Mophie’s travel charger, it’s the length of the included USB-C to USB-C cable. The three-foot run should be enough for most nightstands, but it’s not hard to imagine scenarios where that might not work, particularly since the size of the unfolded charger may limit where you can put it. The cable also connects to the right side of the charger, behind the Apple Watch section, which can further complicate things if your power outlet is on the left side of your desk or table.

Other than the Apple Watch and MagSafe charging discs, the top pads use a plastic construction that feels a bit cheap. It’s a stark contrast to the rest of the design, but as a travel accessory, it’s also understandable that Mophie wanted to keep things as lightweight as possible.

Since it’s officially MagSafe-certified, Mophie’s 3-in-1 travel charger naturally offers the same 15W charging speeds as Apple’s standard MagSafe charger. This proved true in my testing, where it topped up my iPhone 12 Pro Max in just over three hours. That’s still about twice as long as using a wired 20W adapter connection, but you can chalk that up to the general inefficiency of wireless charging.

Either way, the MagSafe pad for the iPhone doesn’t offer any real surprises. It performs identically to an Apple MagSafe charger and can also double as a standard Qi charger, offering 7.5W speeds for older iPhone models or other smartphones.

In my opinion, Mophie’s charger beats out the only other competitor — Apple’s MagSafe Duo — in almost every conceivable way. The MagSafe Duo is more compact by itself, but that’s offset by the need to carry a 20W power adapter and Lightning cable around, which is much more awkward to do without a case.

You’re also getting more bang for your buck with Mophie’s solution. It costs $20 more than the MagSafe Duo, but it offers a third charging pad and includes the 30W USB-C power adapter and case.

For frequent travelers who tote an iPhone, Apple Watch, and set of AirPods, Mophie’s new 3-in-1 travel charger is about as close to a must-have travel accessory as you’re going to find. It gives you everything you need to keep your devices juiced up wherever you may land, organized into a single compact package.

Mophie’s 3-in-1 travel charger is exclusively available from Apple.com or Mophie.com for $150. It can also be found in stock at many Apple Retail stores.

Facebook
Twitter
Pinterest
WhatsApp
Previous articleLeo’s Fortune for Android is classic adventure platforming at its best
Next articleIs It a Good Idea To Use VPN? Here are the Answers
- Advertisment -