HomeNewsMeetings in the metaverse? 52% of employees are open to it
News

Meetings in the metaverse? 52% of employees are open to it 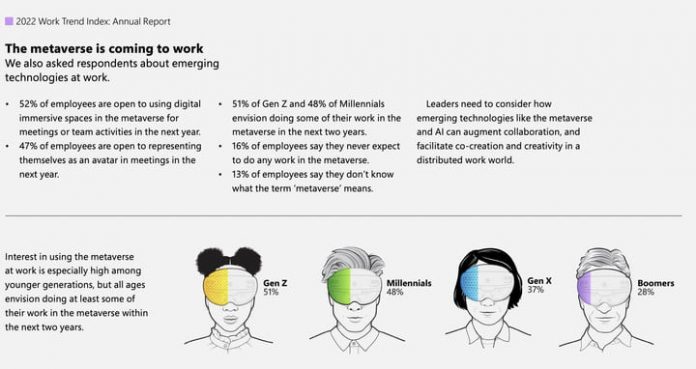 Hesitancy to accept the idea of working in the metaverse is a genuine concern for the proponents of such an idea. But according to a recent Work Trend Index report from Microsoft, most workers are open to doing at least some of their work in the metaverse.

According to the report, 52% of workers “are open to using digital immersive spaces in the metaverse for meetings or team activities next year.” Slightly fewer (47%) are OK representing themselves with a digital avatar in these meetings.

Sixteen percent of workers don’t want anything to do with the metaverse, and about 13% aren’t even sure what it is. That’s just under one-third of the workforce. Given how new the metaverse is (in a mainstream sense, that is), it’s interesting to see how many people are open to the idea of using it, especially for work.

Debates over the merits of remote work have been going on ever since the pandemic began. The metaverse could bridge the gap between managers who want to stay connected to their team and workers who want the flexibility of working from home.

The metaverse — as it’s been discussed in recent years — is a VR or augmented reality social environment that allows friends, family, and even co-workers to interact with each other in a digital space.

If you have seen Ready Player One, you probably understand the basic core concept, though the metaverse is nowhere near that level of sophistication (at least not yet).