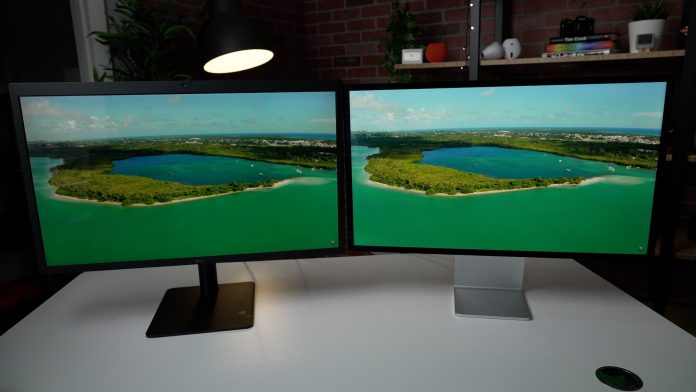 With the unveiling of Apple’s new 27-inch 5K Studio Display earlier this month, it immediately drew comparisons to LG’s similar UltraFine 5K display that’s been on the market for a number of years.

The LG display is $300 cheaper than the Studio Display, and while availability has been spotty, LG says it will continue to be available, so we decided to compare the two displays to determine which is a better value. With both displays coming in at 27 inches and the same 5K resolution, the overall viewing experience is similar between the two displays, although the Studio Display can hit a brightness of 600 nits while the UltraFine maxes out at 500 nits, which translates to a noticeable difference. 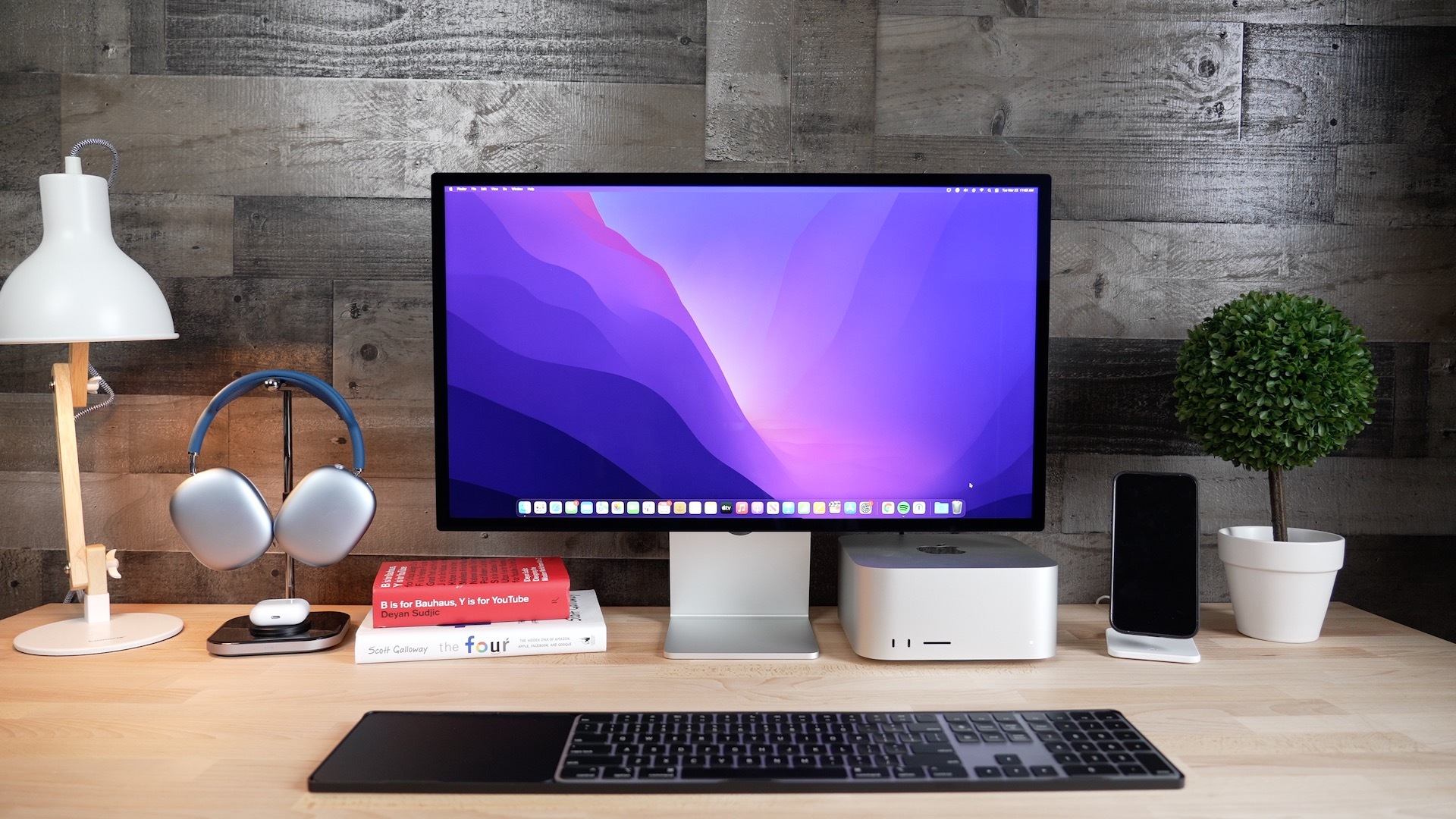 The Studio Display also wins out when it comes to color and contrast, as it looks just a bit more vibrant than the UltraFine while offering deeper blacks and crisper bright areas without blowing out the highlights. The UltraFine has also seen a lot of complaints over the years about image retention or “burn-in,” something we’ve definitely experienced with our own units, and we’ve yet to see any issues with that on the Studio Display. Moving beyond the display itself, both models include several additional features, with one major one being a webcam. Both displays feature 1080p webcams, but the Studio Display’s 12-megapixel Ultrawide camera with Center Stage driven by the onboard A13 chip is designed to help keep you centered in the frame and incorporate additional people as they come in and out of view. 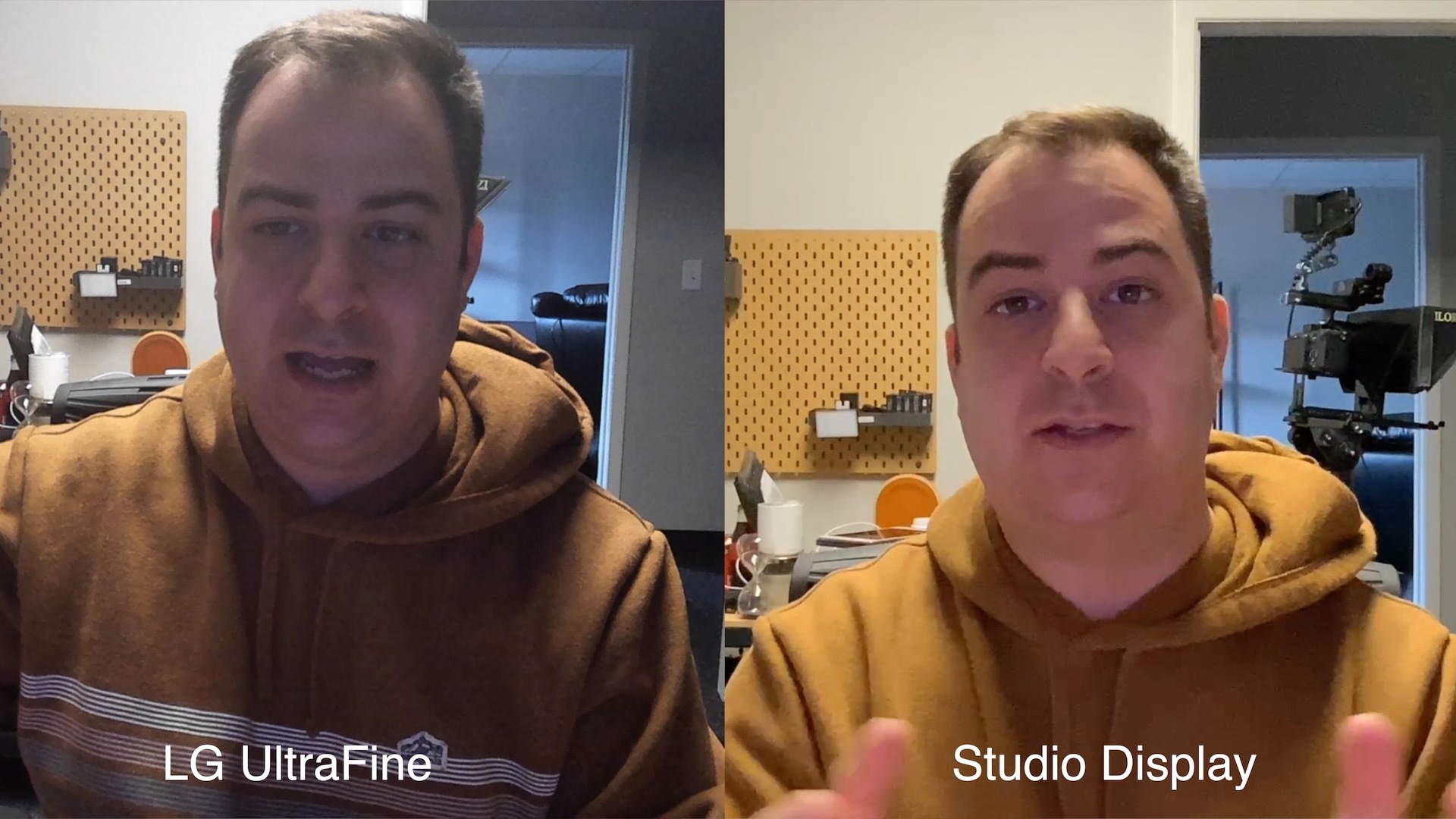 Unfortunately for the Studio Display, we’ve seen the same poor image quality issues many earlier users have complained about, so until the issues are addressed with updates, we have to say that the UltraFine and the Studio Display have pretty similar webcam quality, which is to say not great. When it comes to audio, the Studio Display’s speakers easily take the win, offering a decent amount of low end and a full sound that should be sufficient for most users. The microphones on both displays performed well in our testing, and we didn’t have much of a reason to prefer one over the other, though audio captured by the Studio Display perhaps sounds a bit more full. 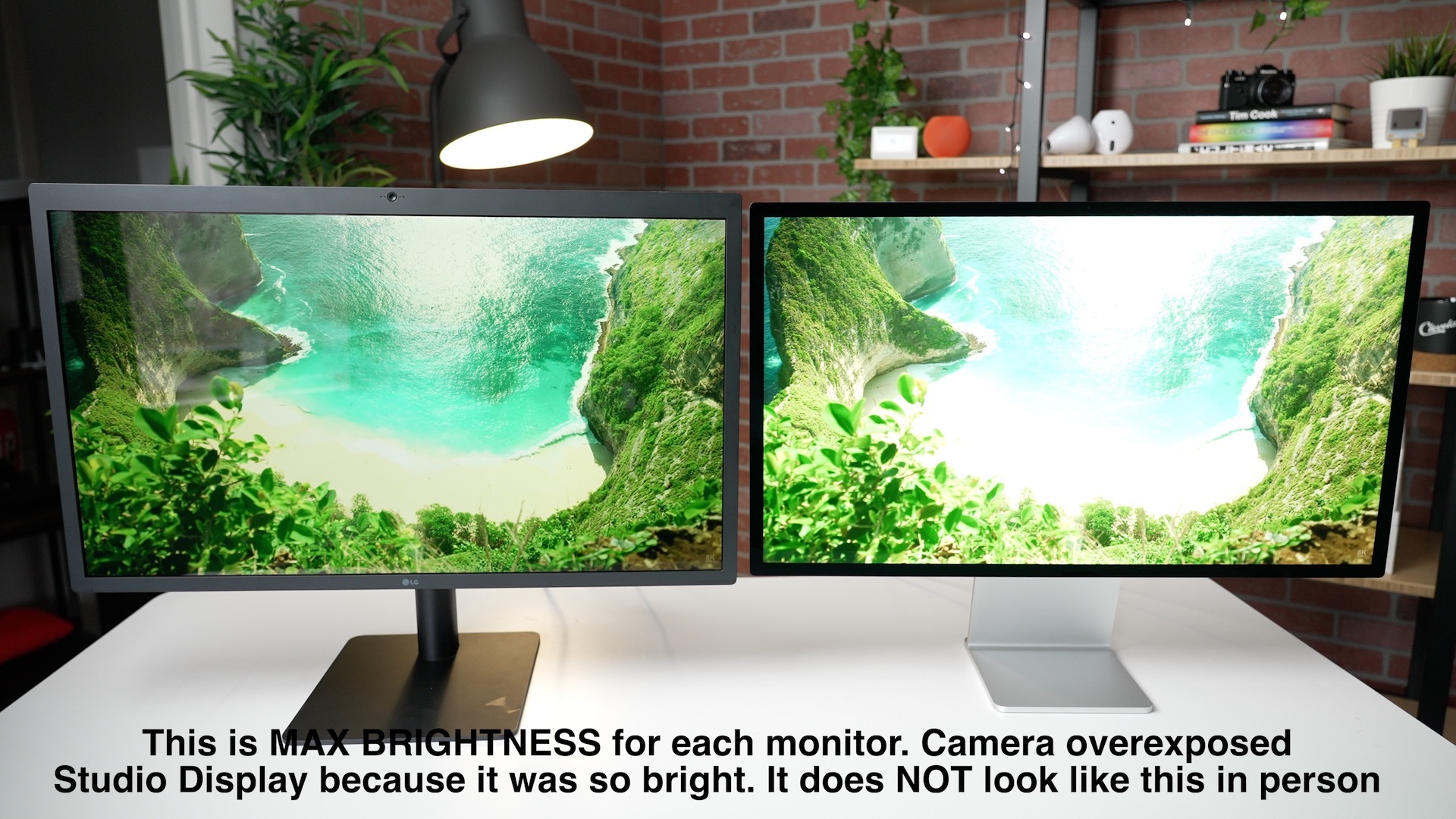 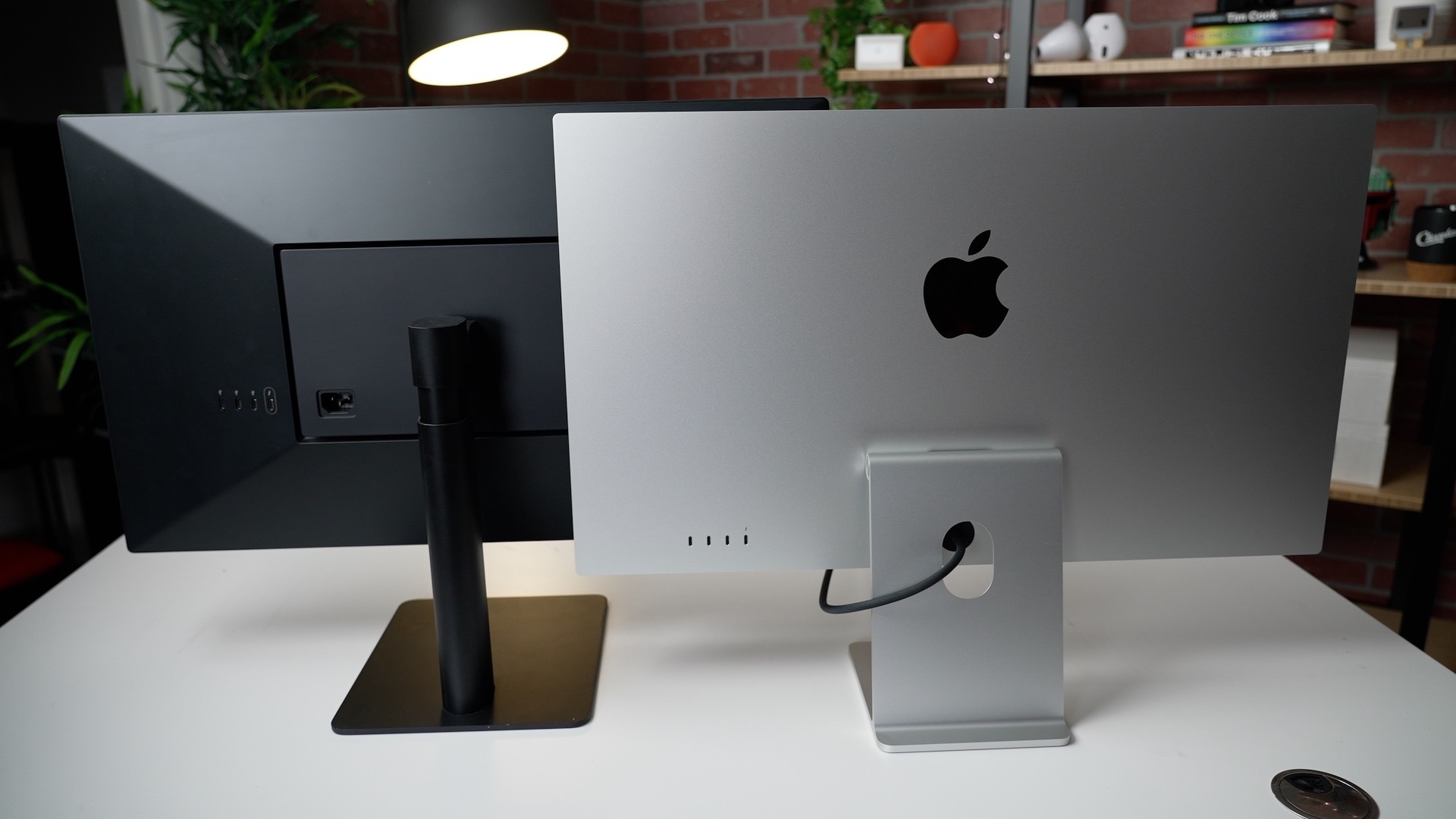 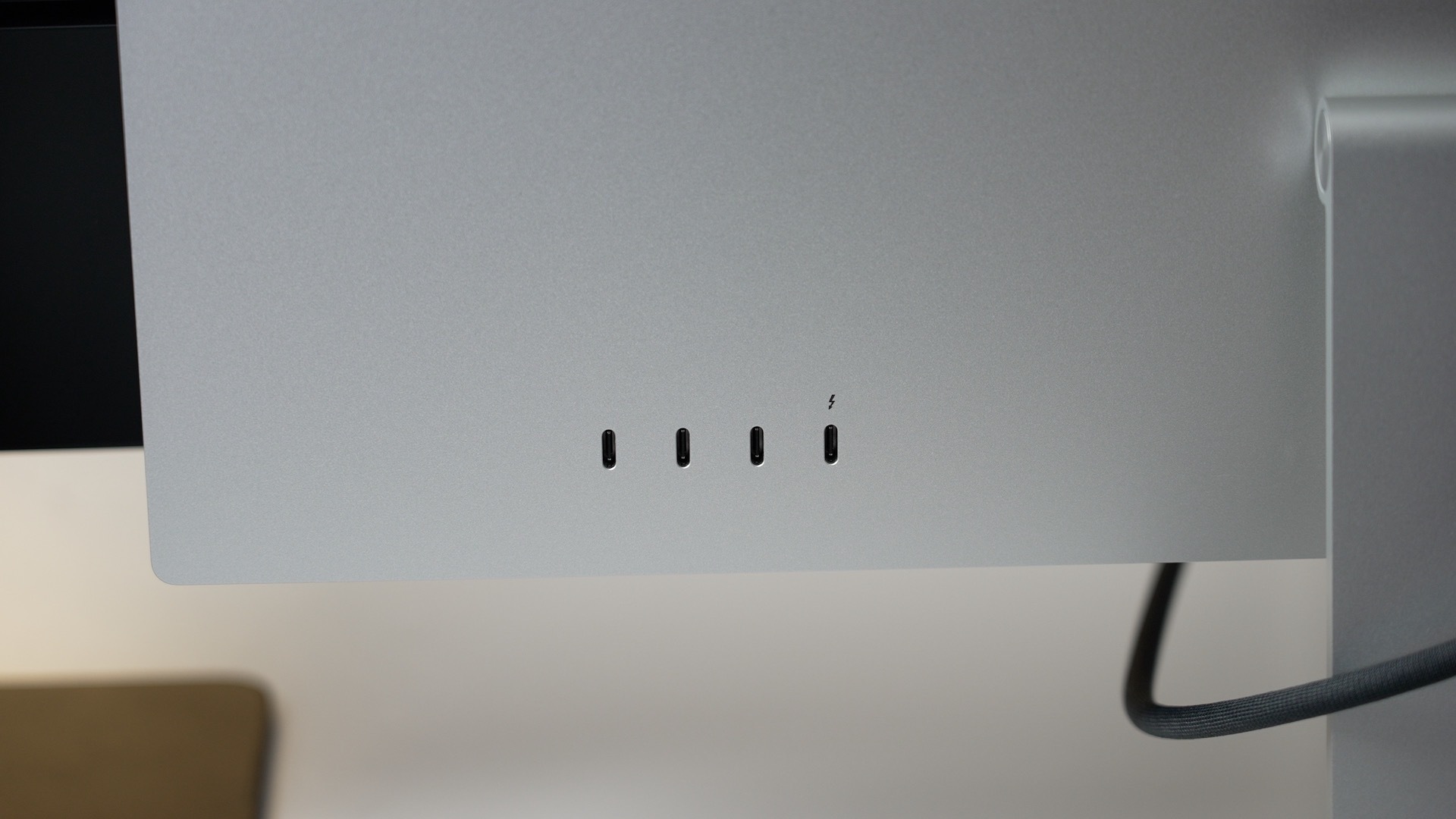 The Studio Display has received criticism for the fact that by default it only comes with a tilt adjustment, with an upgraded tilt- and height-adjustable stand being a $400 upgrade. The LG UltraFine includes the ability to adjust both tilt and height and the stand can be easily removed if you want to convert to a VESA mount, but the display does have a fair bit of wobble. 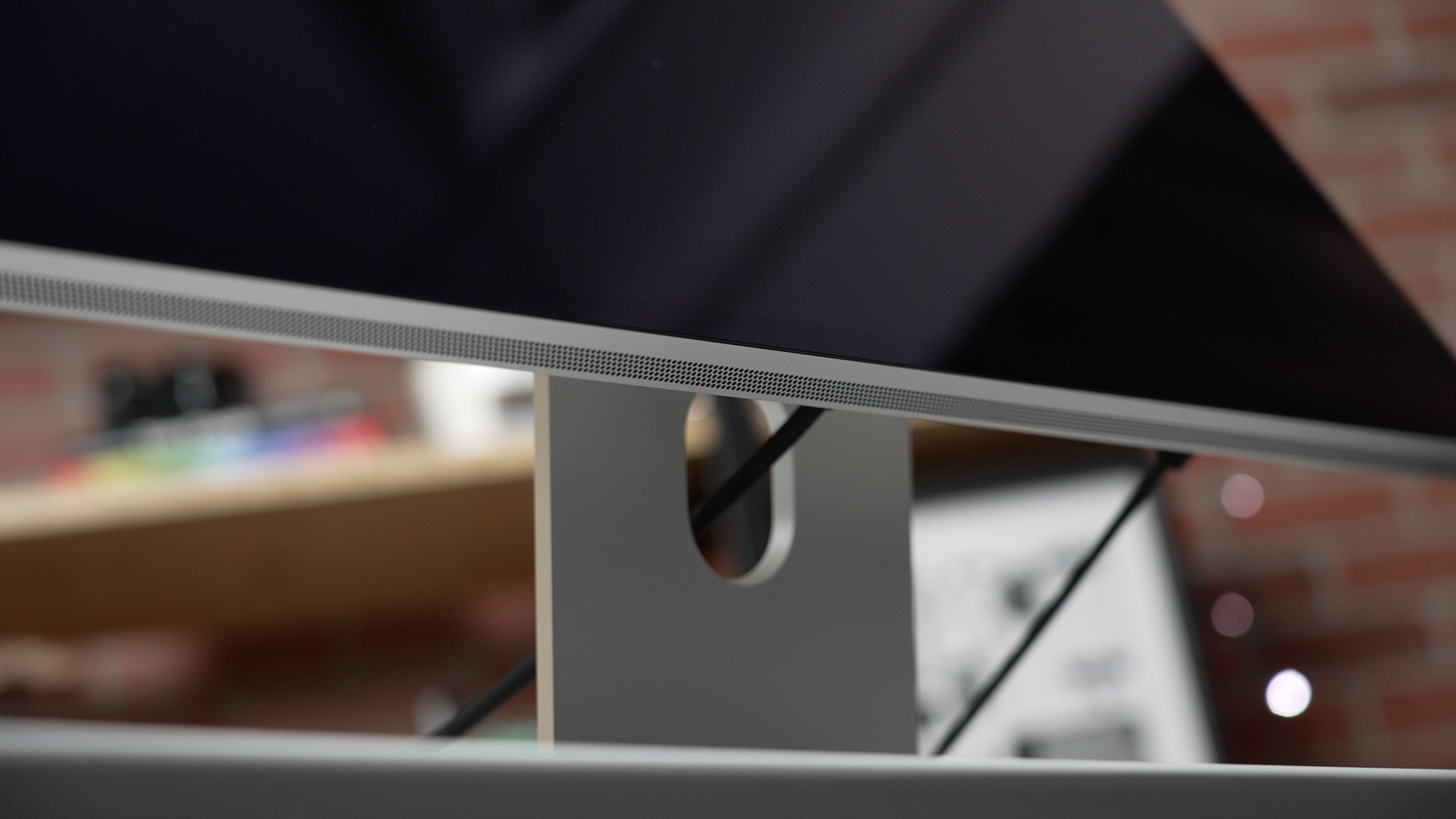 Overall, the Studio Display feels like the better buy, even taking into account the $300+ price premium over the LG UltraFine. With a better design and build quality, a superior display panel, and LG’s history of issues like image retention and reports of compatibility issues, the Studio Display has fewer compromises and should last users for many years. The webcam remains a key issue that needs to be addressed, but that’s something Apple should be able to fix through firmware updates.Related Roundups: Apple Pro Display XDR, Apple Studio DisplayTags: LG, UltraFineRelated Forum: Mac Accessories
This article, “Apple’s Studio Display vs. LG’s UltraFine 5K Display” first appeared on MacRumors.com