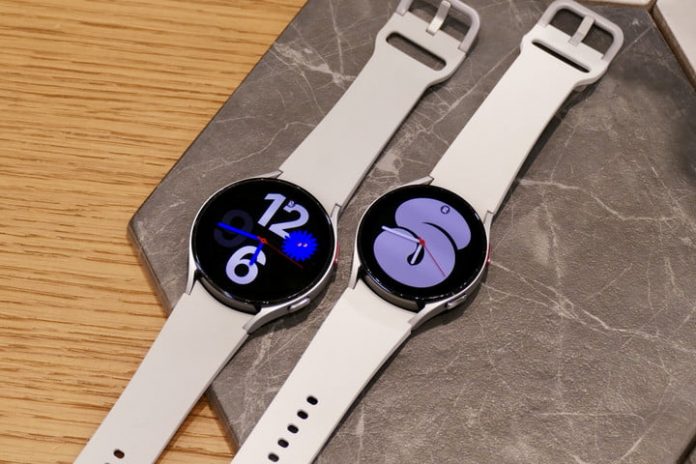 The Galaxy Watch 4 is Samsung’s take on a modern, hi-tech wearable that doesn’t imitate an old-school analog wristwatch. It eschews the classic design of its predecessors for a sleeker, more streamlined look, while also providing some excellent hardware and features. These include a Super AMOLED touchscreen, 16GB of internal storage, generous battery life, and some great health-tracking software.

It’s certainly one of the best smartwatches out there, but in a market saturated by Apple Watches and various Android equivalents, it certainly isn’t without competitors. One of these is the Fitbit Sense, which in 2020 emerged to offer a premium version of the core Fitbit experience, replete with an ECG sensor, a choice of virtual assistants, and a wealth of fitness features.

It too is a strong all-around smartwatch, but when you have only limited space on your wrist, which one should you go for: the Samsung Galaxy Watch 4 or the Fitbit Sense? We answer this question through a detailed head-to-head comparison test, looking at each device’s specs, performance, designs, and batteries. This should help you decide which to go for.

DT review
4 stars out of 5
News

In previous years, the Samsung Galaxy Watch series was known for its distinctly traditional design, something which the Watch 4 does away with for a more 21st-Century aesthetic. It takes away the familiar mechanical bezel — which users physically rotate in order to navigate wearOS — and replaces it with a digital alternative, giving it a slimmer, more economical appearance than its predecessors (or the Galaxy Watch 4 Classic).

It arguably looks sharper than the Galaxy Watches that came before it, although the Fitbit Sense is certainly no ugly duckling. It basically apes the Apple Watch’s “squircle” design, meaning it not only looks attractive (helped by the stainless steel and aluminum casing), but is very comfortable to wear. That said, the revamped design of the Galaxy Watch 4 means that it too is lightweight and easy on the wrist.

While both smartwatches are more or less as visually enticing as each other, the Galaxy Watch 4 undeniably boasts a superior screen. It comes with a Super AMOLED display that packs 330 pixels per inch, regardless of whether you go for the 40mm or 44mm version. By contrast, the Fitbit Sense manages 300 ppi and houses an OLED screen, which can’t quite match the quality and richness of an AMOLED. Still, the fact that these are smartwatches means you’d struggle to notice a difference, so the use of an AMOLED display gives the Galaxy Watch 4 only a slight edge.

The Galaxy Watch 4 finds Samsung adding a range of new sensors to its smartwatch range for the first time, including an optical heart rate sensor (8PD), an electrical heart sensor (ECG), and biological impedance analysis (BIA). These enable users to track a variety of different things, such as their sleep, blood-oxygen level, blood pressure, and body fat levels. The device also gives users the ability to track over 100 different workouts, making it a serious rival to most other smartwatches on the market.

This includes the Fitbit Sense, even if it is marketed more as a health and fitness watch. The Sense comes with an ECG, like the Watch 4, while it also has red and infrared sensors for oxygen saturation (SpO2) monitoring. This means you can use it to monitor your heart rate and blood-oxygen levels, for example, although the range of options on offer isn’t quite as extensive as it is with the Watch 4. Still, the Sense does include an EDA sensor that can be used to monitor stress levels, and while it does require taking out a Fitbit Premium subscription (although a free trial is given to new owners), it is a helpful tool.

The Samsung Galaxy Watch 4 provides a 247mAh battery with its 40mm version, and a 361mAh battery for the 44mm model. In practice, this works out to around two days of battery life if you happen to be a heavier user, making the most of sleep-tracking, workouts, Spotify, and the like.

With the Fitbit Sense, Fitbit promises six days of battery life, although this really applies only if you use the watch sparingly. If, however, you try to get the most out of it, including regular use of its health and fitness features and the always-on display, you will find that battery life is very similar to the Galaxy Watch 4’s. This means about two days between charges, give or take, meaning we have another tie.

In contrast to the Galaxy Watch 4 Classic, the Watch 4 gets rid of the mechanically rotating bezel of previous models. In its place, it has a digital rotating bezel, which has similar functionality to the mechanical version but feels less satisfying and more fiddly, with some users likely to forget about it altogether and focus solely on the touchscreen instead.

This criticism aside, the Watch 4 has the benefit of pairing efficiently with your other Samsung devices (if you happen to have any). It automatically imports alarms and Do Not Disturb settings from your Galaxy S smartphones, saving you the time of having to set them up all over again on your watch.

The Fitbit Sense offers no such integration, which perhaps isn’t surprising in view of how Fitbit doesn’t manufacture phones. Still, the lack of this kind of special feature is a mark against the device, while it’s also worth pointing out that you can buy an LTE version of the Galaxy Watch 4 (letting you take calls and receive messages without your phone). The same thing can’t be said for the Fitbit Sense, so Samsung’s device takes this round.

The Samsung Galaxy Watch 4 starts at $250 and is available from Samsung, with LTE versions available for an extra $50. It’s supported by AT&T, T-Mobile, and Verizon, while most major retailers stock it.

The Fitbit Sense is priced at $299 and can be bought directly from Fitbit. You’ll also find it sold by major electronics retailers, including Amazon, Best Buy, Walmart, and numerous others.

The Fitbit Sense is a highly capable smartwatch, but the Samsung Galaxy Watch 4 just about beats it enough areas to take home the overall win. Its display is sharper and richer, it has more special features, and it’s cheaper. At the same time, it more or less equals the Fitbit Sense in all other respects, providing laudably comprehensive health-tracking features, slick software, and highly practical battery life. Ultimately, it’s one of the best all-around smartwatches you can currently buy, and is arguably a must if you happen to already own a Samsung phone.