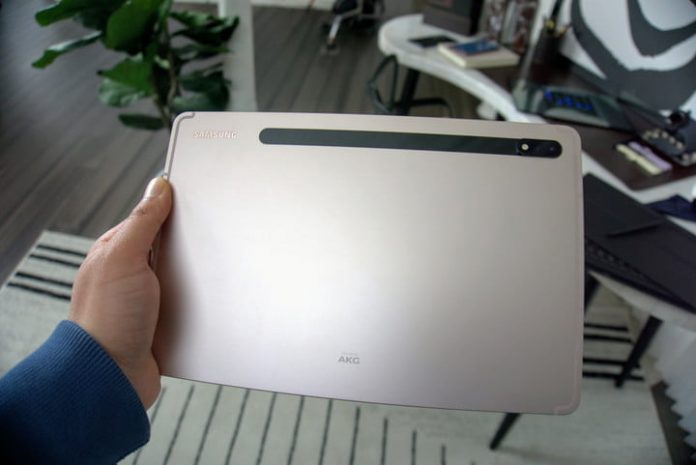 The Samsung Galaxy Tab S8 is already proving quite the hit. So much so, in fact, that Samsung had to pause pre-orders for the tablet. As the successor to 2020’s Galaxy Tab S7, it features a number of enhanced features, including a faster processor, more RAM, an improved selfie camera, and the use of Corning Gorilla Glass for its 11-inch display.

Such upgrades make it a better device overall than its predecessor. However, is it better than the iPad (2021)? Apple’s latest version of its famous tablet also introduces improvements, including expanded internal memory, the A13 Bionic chip (as opposed to the A12), and a new 12-megapixel ultrawide selfie camera that’s capable of supporting the useful Center Stage feature. All in all, it’s an excellent piece of kit, and when it comes to Apple tablets, it’s bettered only by iPad Air and iPad Pro models.

This article compares the two devices in a Samsung Galaxy Tab S8-versus-iPad (2021) head-to-head showdown. It runs through each device’s specs, while also weighing their respective performance, designs, displays, cameras, batteries, and software. This should help anyone sitting on the fence decide which side to choose.

Neither device reinvents tablet design. The iPad (2021) looks identical to the iPad (2020), replete with prominent top and bottom bezels, as well as a Touch ID-compatible home button. As for the Samsung Galaxy Tab S8, it also looks scarcely distinguishable from the Tab S7, featuring a very sharp edge-to-edge display with narrow bezels that arguably make it look more attractive than the iPad.

When it comes to display quality, the iPad houses a 10.2-inch Retina IPS LCD touchscreen with a resolution of 2160 x 1620 pixels. This provides 264 pixels per inch, in contrast to the 274 provided by the Tab S8’s 11-inch TFT screen. In terms of richness, clarity, and detail, both screens are broadly comparable, although the Samsung tablet has the advantage of supporting a smooth 120Hz refresh rate. This really does make a noticeable difference when using certain apps and watching certain media, so it’s enough to give the Tab S8 an edge in this department, too.

Lastly, it’s worth pointing out that neither device comes with an IP rating. However, since the Tab S8 looks a little more becoming and offers a slightly more inviting display, it wins this round.

In contrast to the two-year-old Apple A13 Bionic chip found in the iPad (2021), as well as the iPhone 11 series, the Galaxy Tab S8 runs on a new Snapdragon 8 Gen 1 processor. This is one of the first production chips to feature 4nm transistors, something that really does make a performance difference. The Tab S8 also contains 8GB of RAM as standard, while the iPad makes do with 3GB. Together, these two divergences mean that there’s a tangible performance difference between the two tablets, with the S8 handling the latest apps and games with more ease.

Another key difference is that that the iPad (2021) packs only 64GB of internal memory as standard, while the Galaxy Tab S8 gives you 128GB. In an age where photo-taking is second nature to many people, this doubling of storage size makes a big difference. If that weren’t enough, Samsung’s tablet also has a microSD card slot, so you can snap away and download apps without worrying too much about running out of space. The same can’t really be said for the iPad.

With battery life, things are more even. The Tab S8 comes with an 8,000mAh battery, while the iPad takes its energy from an 8,557mAh cell. In practice, this doesn’t result in a significant difference in day-to-day longevity, although the lack of support for a 120Hz refresh rate should mean that the iPad just about outlasts the Tab. Only just, however, and not by a margin to counteract the Samsung tablet’s superior performance.

The iPad (2021) features an 8-megapixel wide lens with the same f/2.4 aperture as its predecessor, as well as the same autofocus, panorama, and HDR features. With the Galaxy Tab S8, you get a dual-lens rear setup, including a 13MP wide camera and a 6MP ultrawide.

Neither device really excels when it comes to photography, which is what we’ve been trained to expect from tablets. It’s arguable that the inclusion of an ultrawide lens on the Tab S8 makes it more versatile as a camera, but most users will barely even notice it’s there, given that it captures mostly perfunctory pics. The same goes for the wide lenses of both devices, which take good if not amazing photographs, but tend to struggle a little in lowlight situations.

However, it’s with its front-facing selfie camera that the iPad takes a slight lead over the Samsung. It comes with the 12MP ultrawide selfie camera you can also find on the iPad Pro, something that not only enables much greater clarity and detail, but is also compatible with Apple’s much-vaunted Center Stage feature. The latter ensures you remain in the middle of any selfie shot, and while it’s a modest touch, it’s helpful enough to give Apple’s device a win in this round.

The iPad runs on iPadOS 15, while the Samsung Galaxy Tab S8 uses Android 12 with OneUI 4 over the top. The latter OS gives stock Android a welcome makeover, with colorful large icons and intuitively laid-out menus. It’s also highly customizable, something that can’t always be said for iPadOS 15. Of course, Apple’s OS has its own strengths, including ease of use and security, so it’s generally not easy to compare the two.

In the past, more or less any iPad would have won the “Software and updates” round, if only because Apple generally supports its devices for a long time. However, Samsung has committed to provide the Tab S8 with four core OS updates (and an extra year beyond this of security updates), so you’ll be able to stay current with it long past the point of upgrading to a new tablet.

The Samsung Galaxy Tab S8 comes with the S Pen, which is a first for the standard Tab model. This opens a range of productivity features, allowing you to take notes, draw, and more. The Tab also supports Samsung’s DeX mode, which transforms the tablet into a Windows-esque laptop with a familiar desktop layout and resizable windows.

Similarly, the iPad supports the first-generation Apple Pencil, which also opens up a range of productivity and multitasking functionality. But you will need to fork out $89 for this special feature, whereas the S Pen comes with the S8 as standard. This may be only a small amount, but it’s just enough to give the S8 another win.

The ninth-generation iPad (2021) starts at $329 for the 64GB Wi-Fi-only model and rises as high as $609 if you want 256GB of internal memory and cellular support. It’s available to buy directly from Apple right now, while also being sold by pretty much every major retailer under the sun.

The Samsung Galaxy Tab S8 starts from $699 for the 128GB model, and bumps up to $779 for the 256GB version. It can be pre-ordered from Samsung, and will be supported by AT&T and T-Mobile in the near future. It will almost certainly be stocked by most major electronics retailers.

The combination of several narrow victories means that the Samsung Galaxy Tab S8 beats the iPad (2021) overall. It features a nicer design, a slightly superior screen, better performance, more memory, and more useful special features. By contrast, the iPad offers a marginally superior camera system overall, and most likely longer update support. This means that anyone neutral when it comes to Android versus iOS should almost certainly pick the Tab S8 over its iPad rival.

However, keep in mind the massive price difference between the two devices. With the iPad losing only narrowly, Apple’s iPad certainly isn’t a bad option if you’re looking to save some dollars. But if money is no object, the Samsung Galaxy Tab S8 is the way to go.