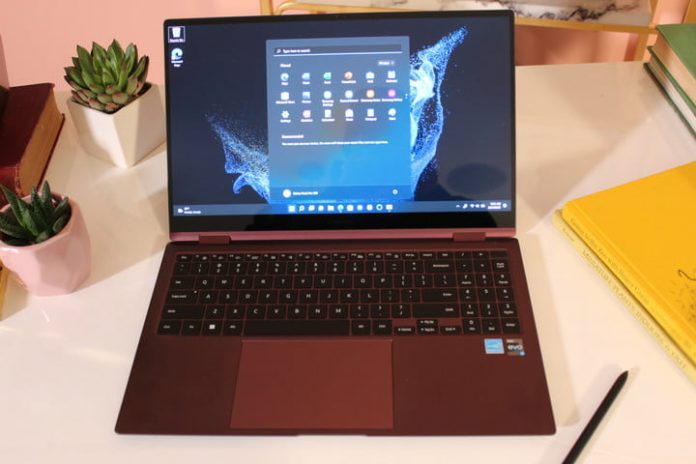 Samsung is best known for phones and televisions, yet on the computing side, it often takes some of the lessons learned from those products to create amazing laptops. We already liked the original Galaxy Book Pro 360 for some of those reasons, and now the new Galaxy Book 2 Pro 360 is arriving as a follow-up.

I got to try one out ahead of Mobile World Congress, and the question was whether Samsung could take its beautiful OLED displays, as well as some synergies from the Galaxy phone and tablet lineups, and combine it into what could be another winning laptop for multimedia consumption? Let’s find out the answer.

Note the 360 branding here. This is a Windows convertible. Without the “360,” you’re getting a regular clamshell laptop.

I was hands-on with the new 15-inch, burgundy-colored Galaxy Book 2 Pro 360. The device also comes in graphite and silver. The burgundy is a bold color choice and reminds me a lot of Samsung’s Galaxy Chromebook, which came in a bright Fiesta Red color. It’s a nice change from the black or silver laptops I’m used to seeing.

Aside from slight tweaks for improved ventilation, the overall design of the Galaxy Book 2 Pro 360 hasn’t changed much over last year’s model. It still is made of aluminum alloy. When I picked up the 15-inch model, it felt surprisingly light for a 3.1-pound device. What’s even more surprising is how much of a slim profile it has. Samsung says it’s just as thin as a Galaxy smartphone.

The 13-inch model is even lighter, coming in at 2.2 pounds, and is about the same thickness. I can totally see someone holding either model as a large tablet for watching movies or other multimedia tasks.

That thinness might come at a sacrifice to build quality, though. When I pressed down on the keyboard deck while typing, there was just a tiny bit of flex near the function keys. This was an issue that we had with last year’s model, and it looks as though Samsung has addressed it just a little.

Many laptop makers have made the move to 16:10 aspect ratio displays. This is good for productivity, but for multimedia, it often means you end up getting letterboxes in movies and other content. While I was hoping that Samsung might finally make the switch over to the new ratio, this year’s Galaxy Book 2 Pro 360 again keeps 16:9. 1920 x 1080 resolution panels, but they are brighter at 500 nits.

While that might seem like a bad thing for most people who use laptops for productivity, in the case of the Galaxy Book 2 Pro 360, it’s great for consuming movies and content. Combined with the Super AMOLED panel that can reach a peak brightness of 500 nits, everything I tried out on this display looked great.

The S Pen is also supported on the Galaxy Book 2 Pro 360’s display panel. It doesn’t have any Bluetooth functions, but it is included in the box and is a great way to doodle or draw. I enjoyed using it in Microsoft Paint, and found that the design and functions are otherwise unchanged from last year’s model.

Despite the screen size being 15 inches, Samsung’s choice to keep FHD panels means the screen did feel a little cramped. A bump up to a 4K resolution would have been nice. The choice of 16:9 also means that the Galaxy Book 2 Pro 360 has an ugly bottom bezel. Lenovo and HP have managed to cut this out on their devices, but Samsung hasn’t.

This aspect ratio and resolution might not be good for web browsing, but it is great for movies. I pulled up a YouTube video of an aquarium, and I couldn’t help but feel immersed in the full-screen, letterbox-free experience. Samsung told me the panel on the Galaxy Book 2 Pro 360 hits 120% of the DCI-PC color range and supports HDR content. After noticing the vibrant blues in the fish and purples in the reefs, I am pretty sure I didn’t need a colorimeter to test it.

A special feature built into the new Galaxy Book lineup, as well as last year’s, is an app known as Second Screen. With it, you can use a compatible Samsung Galaxy tablet as a second display for your Galaxy Book 2 Pro 360.

It works pretty seamlessly. Samsung paired up a Tab S8 to the Galaxy Book 2 Pro 360 for me, and I placed it on the table and dragged Microsoft Edge windows over to the tablet. Windows sees it as an external display in settings. Scrolling was smooth, and the S Pen even worked on the second screen too. It felt as natural as having a dedicated monitor and reminds me of Sidecar on MacOS.

Other synergies include Samsung Multi Control, where you can use your Galaxy Book 2 Pro series keyboard and trackpad on your Tab S8. There’s also Quick Shar for sharing files to a Samsung Android Phone, as well as SmartThings to control compatible smart devices. There are also integrations with Your Phone in Windows 11 that let you see Android apps from your Galaxy phone over on your PC.

The keyboard and trackpad on the Galaxy Book 2 Pro 360 are unchanged from last year’s model. It has around 1mm of travel, and the 15-inch model has a number pad and a built-in fingerprint reader. Keys are backlit and nice and springy.

The touchpad scrolls smoothly and properly responded to my gestures. It’s also nice and wide, which is appreciated for a wide 15-inch device.

The 13-inch versions, of course, don’t include the numpad on the side.

Ports are unchanged between generations as well. The Galaxy Book 2 Pro 360 sports one Thunderbolt 4 port, two USB-C, a headphone jack, and a microSD card slot. Dongles will be a must here, but considering that Dell took away the headphone jack and microSD card slot on its XPS 13, it’s nice to see some laptop makers are keeping them.

It should be noted that if you’re looking for more ports, the Galaxy Book 2 Pro includes options like HDMI and USB-A in addition to USB-C.

It’s one of the big generational changes, and I loved it. When I fired it up, I was able to see the fine details in my face, like the curly hairs in my sideburns. The room around me also didn’t look washed out, and the webcam picked up the studio lighting just right without making it look too overblown.

Samsung says the webcam has a wider-angle view, up to 87 degrees from 77 degrees. The software features on the device also bring improvements like Auto Framing to keep you centered in the frame. Background Effects and Face Effect also remove visual distractions from the background to enhance your appearance. Bidirectional A.I. noise-canceling blocks out distracting noises on video calls, both on your end and on the other end.

This year’s Galaxy Book 2 Pro 360 comes with Intel’s latest 12th generation processors. I wasn’t able to run benchmarks, but the model I was hands-on with had the Intel Core i7-1260P CPU.

This chip runs at 28 watts and has 12 cores. Part of the new P-series, it has four performance cores and eight efficient cores on board. This is a hybrid processor, similar to ARM chips, so Windows is better able to manage background and foreground tasks.

As usual, I was limited to web browsing and playing around with system apps. And in this area, the Galaxy Book 2 Pro 360 handled everything just fine. Opening up about six tabs in Edge, as well as the Microsoft Store and Samsung’s built-in apps barely took the processor to 5% utilization. Of course, that’s an unscientific test, and we look forward to diving deeper once we have one in our lab.

Intel worked closely with Samsung on these new chips, and the company tells me the devices in the Galaxy Book 2 Pro lineup are the first consumer PCs to meet Microsoft’s secure-core requirements. This means an enhanced level of protection on Windows 11. Features include deeply integrated hardware, firmware, and software to boost protection against potential cyberattacks. These are usually only found in enterprise systems.