HomeNewsHow Would a MacBook With a Foldable Display Work?
News

How Would a MacBook With a Foldable Display Work? Amid reports of Apple working on a notebook with a foldable display, how exactly could such a device be implemented?

Concept by Majin Bu
Earlier this week, Display Supply Chain Consultants (DSCC) analyst Ross Young claimed that Apple is exploring the possibility of offering notebooks with foldable displays. The company is said to be discussing such devices with displays around 20-inches in size with its suppliers. This display size could allow for 4K resolutions or higher, Young added.

Young has revealed a wide range of accurate insights into Apple’s plans, such as the iPhone 13 Pro’s ProMotion display, the display size and bezels of the sixth-generation iPad mini, the 14- and 16-inch MacBook Pro’s mini-LED displays with ProMotion, and more, so his reports are worth taking seriously. He says that the foldable notebook could compose a whole new product category for Apple, but with so little known about the mysterious new form factor at this very early stage, there appear to be three main options for how Apple could conceive of the device.

Perhaps the most obvious implementation for a foldable Apple notebook is an all-screen MacBook with a display that spans the entire interior of the clamshell design. Young appeared to speculate that this implementation could result in a dual-use product, saying that it may be able to work as a notebook with a full-size on-screen keyboard when folded and as a monitor when unfolded and used with an external keyboard. 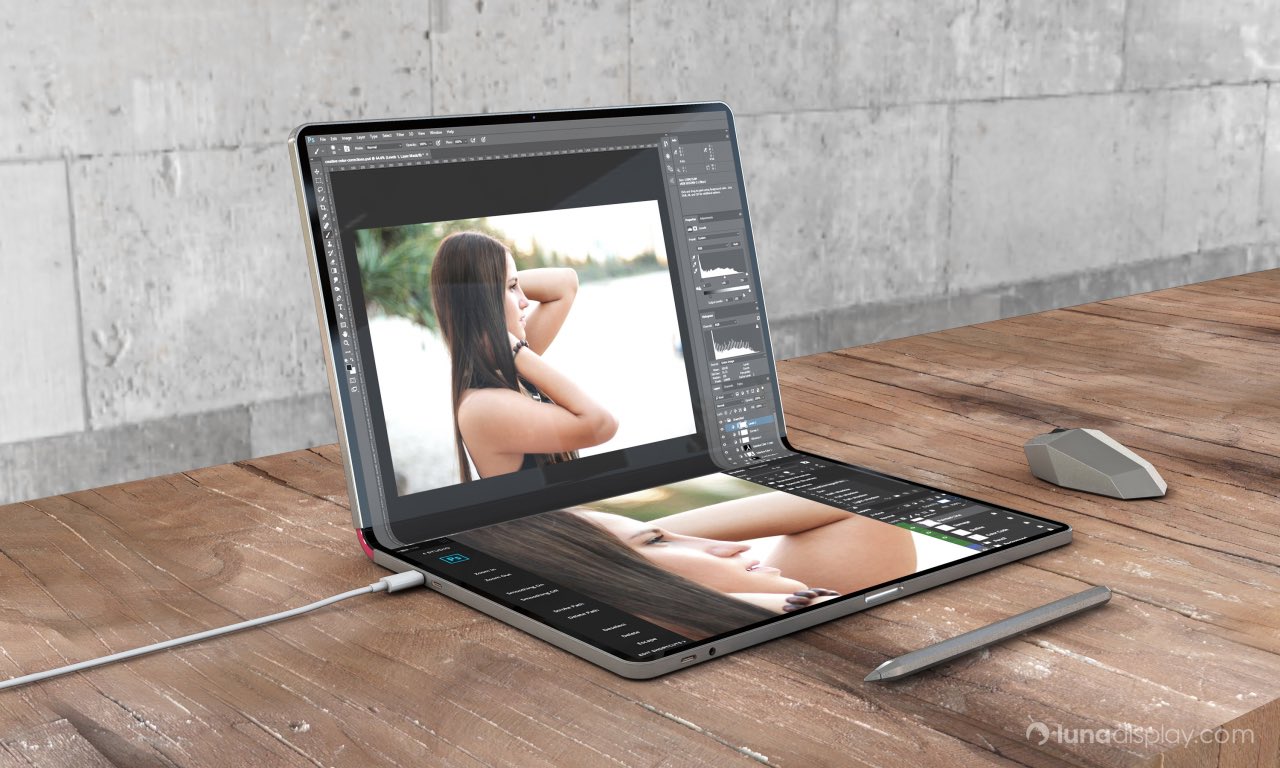 Concept by Astropad
There are two main drawbacks to the likelihood of this design. The first is Apple’s well-known reticence to offer a touch-screen based Mac, with company executives often publicly shooting down the possibility of it ever offering such a device. For example, former Apple design chief Sir Jony Ive has said that a touchscreen Mac would “not be a particularly useful or appropriate application of Multi-Touch.”

macOS is heavily optimized for indirect trackpad or mouse input, rather than touch. In 2020, Apple engineering chief Craig Federighi said that Apple designed and evolved the look of macOS in a way that felt comfortable and natural across a family of devices, and something like touch is not remotely considered. This is not to mention the potential ergonomic issues of a touchscreen keyboard and trackpad. As a result, an all-touchscreen MacBook seems to be very much out of step with the company’s thinking in recent years.

The second factor is the 20-inch display size Apple is said to be exploring. When folded, this would create a smaller main display area than even the 11-inch MacBook Air, the smallest display Apple has ever offered on a MacBook. Likewise, the other portion of the display for the keyboard would be similarly diminutive, offering a smaller on-screen keyboard than on either of Apple’s current iPad Pro models when used in landscape. 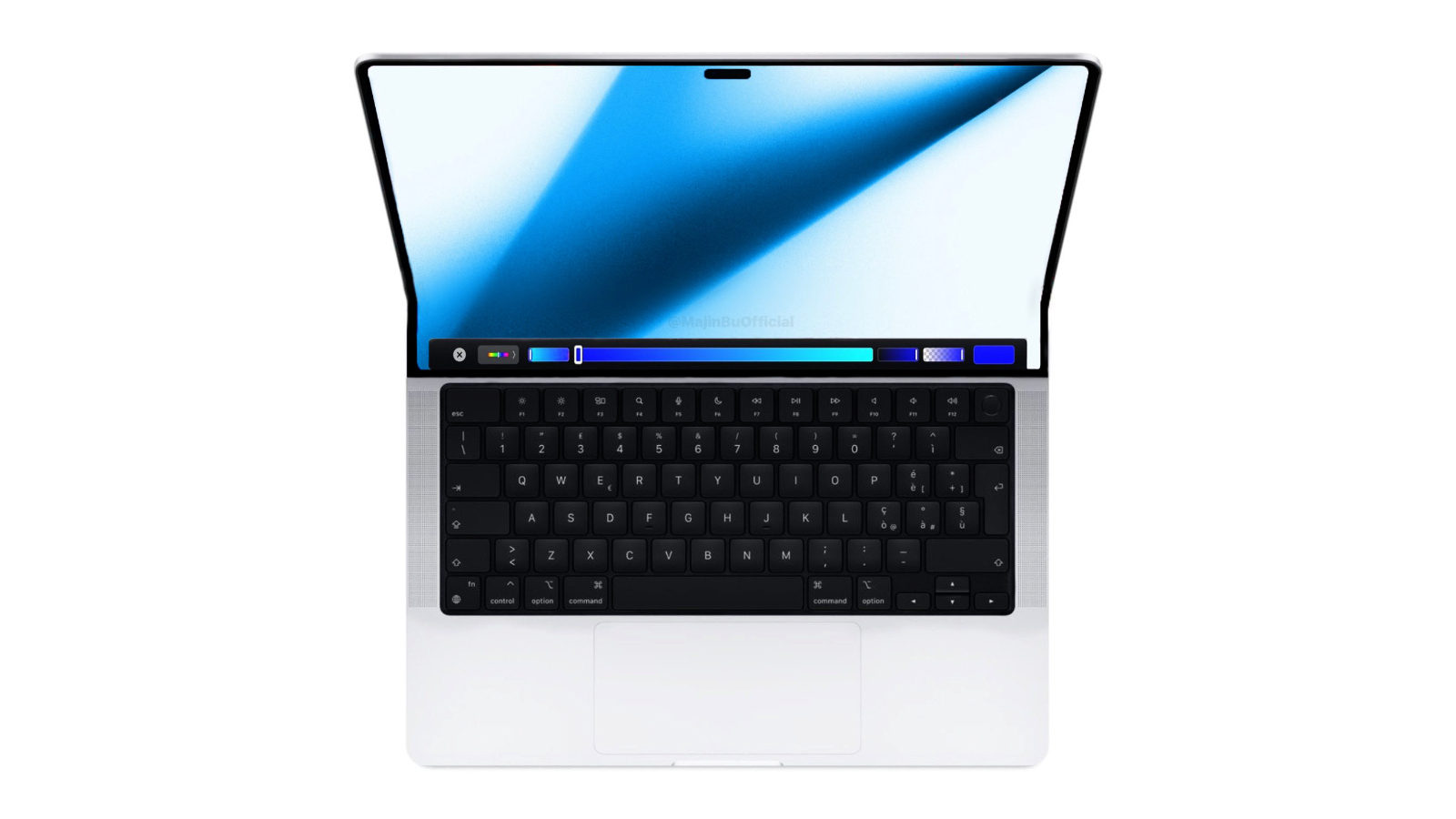 Concept by Majin Bu
The design could also offer a way to revive the Touch Bar without sacrificing physical function keys. In another interview, Federighi explained that the MacBook Pro form factor with the Touch Bar avoids the ergonomic problems caused by other touchscreen laptops:

We really feel that the ergonomics of using a Mac are that your hands are rested on a surface, and that lifting your arm up to poke a screen is a pretty fatiguing thing to do.

Regardless of whether or not the Touch Bar is revived, extending the MacBook’s display in this way would abide by Apple’s ergonomic demands of not lifting one’s arms to touch the screen while offering a new location for touch input.

In this instance, the 20-inch display size could be more plausible, potentially offering an even larger MacBook Pro to sit above the 16-inch model in the lineup, akin to the 17-inch MacBook Pro that the company offered between 2006 and 2011.

While Young described the device as a “foldable notebook,” there is a chance that, if it is an all-screen device, it could actually be a foldable ‌iPad Pro‌. After all, a touch-based all-screen notebook running macOS would likely cannibalize the ‌iPad Pro‌, so the device running iPadOS could make more sense. There have been sketchy rumors of Apple working on a foldable iPad Pro in the past, so the idea would not be totally unheard of.

It is also noteworthy that this implementation could also line up with rumors of a larger iPad Pro. Last summer, Bloomberg’s Mark Gurman suggested that Apple was working on even bigger iPad models that could further “blur the lines” between tablet and laptop:

I’m told that Apple has engineers and designers exploring larger iPads that could hit stores a couple of years down the road at the earliest. They’re unlikely for next year—with Apple’s attention on a redesigned iPad Pro in the current sizes for 2022—and it’s possible they never come at all. But a big iPad would be the perfect device for many people, including me, and would continue to blur the lines between tablet and laptop.

Larger display sizes may bring the ‌iPad‌ closer the Mac than ever before, but there would likely also need to be software improvements to properly take advantage of the larger display. Apple last updated the ‌iPad Pro‌ in April 2021, but some users have complained that iPadOS does not take full advantage of the hardware the ‌iPad Pro‌ has to offer, making it more challenging to replace a Mac than it could be.

Gurman opined that Apple will ultimately need to allow Mac apps and a Mac-like multitasking experience with more flexible arrangements of app windows on the ‌iPad Pro‌. By the time even larger iPads come to market, it is likely that further iterations of iPadOS may improve the experience to take better advantage of the ‌iPad‌’s hardware.

Young said that the launch timeframe for Apple’s foldable notebook is “likely later” than 2025, with 2026 or 2027 being floated as reasonable possibilities, but there is still a chance Apple discontinue the project long before then.

Meanwhile, Young said that Apple’s long-rumored foldable iPhone has been delayed until 2025, a significant delay compared to previous predictions that the device would launch in 2023 or 2024.
This article, “How Would a MacBook With a Foldable Display Work?” first appeared on MacRumors.com

Facebook
Twitter
Pinterest
WhatsApp
Previous articleNordVPN Split Tunneling: What is it, and what does it do?
Next articleDeals: Apple’s M1 iMac (8-Core GPU, 256GB) on Sale for All-Time Low Price of $1,349.99 in Every Color
- Advertisment -